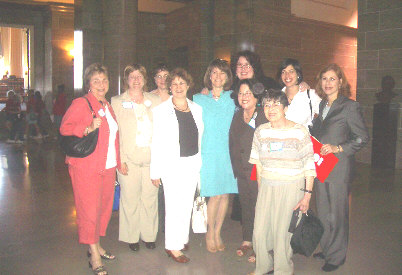 Forty-five Jewish activists from St. Louis traveled to Jefferson City on May 2nd to express concern to members of the Missouri legislature about a number of measures that threaten religion-state separation. Led by the National Council of Jewish Women (NCJW)-St. Louis Section, Hadassah, St. Louis Chapter, and the Advocacy Coalition of the Jewish Community Relations Council, the group met with legislators of both parties.

According to Marlene Hammerman, the State Public Affairs Chair of the NCJW, "we thanked our true friends" in the legislature and engaged a number of other legislators in discussions. Some of those conversations, Hammerman said in an interview with JewsOnFirst, "felt like banging our heads against the wall" because those legislators had clearly "been elected to carry out the agenda of the religious right."

Hammerman recounted the group's meeting with one Republican legislator about a bill that would give parents a tax credit equal to 100% of what they spend on private school tuition - in effect, she noted, a state subsidy of religious schools. The legislator side-stepped the subsidy issue by stressing that the tax credit would help the kids in St. Louis's "terrible" school system, said Hammerman, "and we had to put him back on message."

Other legislators did not try to dissemble. One came right out and said it doesn't matter what we say, she would have to vote her conscience. Her religious belief that life begins at conception leads her to oppose stem cell research. That other religions do not agree does not matter.

Missouri Republicans (who control both legislative houses) are sponsoring several bills that explicitly or implicitly promote conservative Christianity. A measure introduced in the Missouri legislature and passed out of committee stated that "religious displays on public property, and the recognition of a Christian God are not a coalition of church and state." See our earlier report, Joplin Jewish leaders voice concern about "Christian God" resolution.

Action led by the Jewish community stalled that bill, Hammerman said. "There was such a huge response from Jewish groups that the bill went nowhere." She said Jewish organizations had reached out to Christians and to the interfaith community to build opposition to the measure.

Now Jewish groups are warily eyeing legislation for a ballot measure guaranteeing the right of citizens to pray in all public places, said Hammerman. People, of course, already have that right, so the measure implicitly endorses religion, she said. Nevertheless, "even a few of our friends in the legislature voted for this because it was presented as a bill on religious freedom." There is concern that the measure will help turn out right-wing Christian voters in the November election, when a measure regarding stem cell research, strongly backed by Missouri Jewish organizations, will also be on the ballot.

With the legislative session coming to a close next week, there remains a viable bill allowing the Bible to be taught in school. And, notes Hammerman, last-minute items are frequently tacked onto unrelated measures in the session's final days.

Hammerman said a major achievement of the day in the capital was "educating new participants for advocacy and speaking up for what you believe in. These bills come up year after year," she added, and "everyone who was there was empowered."

The text of the "Christian God" resolution The resolution's operative text reads: "we stand with the majority of our constituents and exercise the common sense that voluntary prayer in public schools and religious displays on public property are not a coalition of church and state, but rather the justified recognition of the positive role that Christianity has played in this great nation of ours, the United States of America."

Missouri legislative resolution combines teaching "Judeo-Christian" history and patriotism. A second resolution before legislature supports "every effort to educate Missouri students, at all levels, about the Judeo/Christian Heritage of our State and Nation along with the patriotism of our founding fathers, without censorship of content-based historical religious or sectarian references" and to give "students an opportunity to daily renew their oath to their country under God and honor those whose courage, sacrifice, and patriotic valor have made our country free..."