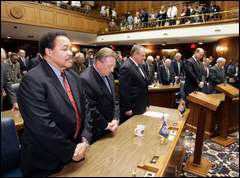 Citing the recent Supreme Court decision that taxpayers without a personal financial stake do not have standing to sue the government for Establishment Clause violations, the Seventh Circuit Court of Appeals last week lifted an injunction on sectarian prayers in the Indiana House of Representatives. Two of the three appellate judges who heard the case said that, following that Supreme Court decision known as Hein, they were bound to determine that the individual taxpayers who sued to stop the practice did not have a monetary interest in the prayers and thus did not have standing.

The taxpayers filed suit after the 2005 legislative session, in which at least 29 of 45 invocations at the opening of House business referenced “Jesus” or “Christ.”

The Chicago based court did not rule on whether the Indiana legislature's sectarian prayers constituted a government establishment of religion. Nevertheless, the American Jewish Committee called the decision "extremely alarming."

Commenting on the appeals court's decision, Stephen Rohde, a constitutional lawyer and author of American Words of Freedom, said it "reveals the dangerous impact of the US Supreme Court's ruling limiting the ability of people to challenge violations of the separation of church and state.

"Is there any doubt," continued Rohde, "that having elected officials begin their legislative work with such blatantly religious prayers is a direct violation of the First Amendment? Of course not. Yet, unable to defend such infringements on the merits, the Supreme Court and now the Seventh Circuit, have used the doctrine of 'standing' to prevent any challenge from even being made. Since the people seeking to defend separation of church and state could cite no personal financial injury, these courts have found that they have no 'standing' to bring the challenges in the first place.

Madison and Jefferson are surely turning in their graves," Rohde concluded. "If anyone doubts why future appointments to the Supreme Court are so important, take heed of this travesty of our Constitution."

ACLU might go back to court
The case was filed when Republicans controlled the House and the Republican speaker, Brian Bosma was a key instigator of the prayers. He hired outside lawyers to fight the lawsuit.

Earlier, in a discussion with Jewish leaders who were advocating an end to sectarian prayers, Bosma demanded: "How many Jews are there in Indiana? About two percent?"

Democrats won control of the chamber in November 2006 and their speaker, B. Patrick Bauer, continued defending the lawsuit. Last week he issued a statement welcoming the court's decision and said he would ask the state's attorney general to work out its "ramifications."

Bauer was not available to respond to our question about how he'll deal with Jews' objections to sectarian Christian prayers. A media representative for the House Democrats told JewsOnFirst that Bauer has always "been respectful" of the sensibilities of religious minorities.

The attorney for the ACLU of Indiana, which represented the plaintiffs, did not respond to a message requesting comment, but was quoted by local papers last week indicating that he might request a rehearing by the entire 7th Circuit. He also said that, should the sectarian prayers resume, the ACLU would go back to court.