Indiana House Speaker Brian Bosma, a Republican who is leading an aggressive effort to present sectarian prayers as part of the chamber's official business (see other articles in this section), alarmed Jewish leaders who met with him during a lobby day when, during a discussion of the prayer issue, he asked them how much of Indiana's population Jews comprised. Rabbi Jon Adland of the Indianapolis Hebrew Congregation, who was present at the meeting wrote in an email to his congregation:

Speaker Bosma (pictured here), defending the prayer issue, asked, "How many Jews are there in Indiana? About 2%? There are at least 80% Christians in Indiana." The implication of this statement was that our minority community doesn't and shouldn't have any say or any voice. It is about the majority and what the majority wants. The jaws of the delegation dropped to the floor. We were speechless. Everything we believed about this country had just been trampled. Gone was the belief of the constitutional protection of minorities. Gone was not feeling marginalized. Gone was the belief we were not strangers in this country. I am sure that Speaker Bosma is a fine man, but in that moment, for the first time in my life as a citizen of this country, I was scared.

Bosma has apologized, but not before telling an Indianapolis television station "I asked the group what percentage of the population in Indiana for demographic purposes was of Jewish tradition and faith and it was them who provided me with the two percent." 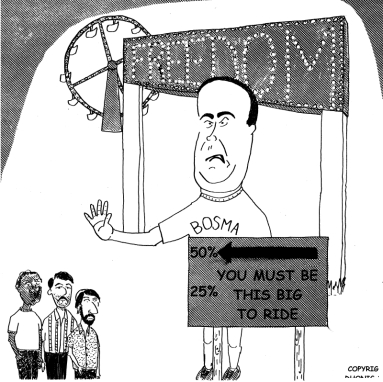 JewsOnFirst learned about the situation when blogger David Honig alerted us to his posting on The Daily Pulse. Click here. It is Honig's cartoon that you see on this page. On Monday, February 20th, he updated the posting to report on Bosma's apology.

We were later alerted by Jeff Hauser, political director of the National Jewish Democratic Council, who in his blog ( Click here.) gave David Honig credit for Bosma's apology. Hauser, who found Honig's posting on the Daily Kos, wrote an introduction that demands quoting:

When it comes to discussing matters of church and state... we are sometimes asked why we feel the issue to be "Jewish" in nature.

And while we are the first to argue that the Constitutional protection of religious minorities, from Muslims to atheists to Jews, should be important to all Americans... the reality is that Jewish history and minority status work together to make Jewish organizations and the Jewish community particularly solicitous of the protections of the 1st Amendment.

And activism originating from progressive blogs [originating with this blogger] has managed to compel an apology from an important Republican whose public comments affirm the Jewish take on church/state issues.

Honig's blog reported Bosma's apology, as well as some interesting background on Indiana's one Jewish legislator, David Orentlicher, who speaks of the tyranny of the majority and the need to protect minorities, no matter how small. Bosma said that he values his ties to the Jewish community and that he sincerely apologized.

After Speaker Bosma's apology, Rabbi Adland, whose email roiled the blogosphere (and who filed a statement in the ACLU's lawsuit that stopped the sectarian prayers, but which Bosma is appealing), referred reporters to the Jewish Community Relations Council in Indianapolis. JewsOnFirst called the Council, asking for a spokesperson with whom we hoped to discuss Bosma's statements and the situation in Indiana. But the woman who answered the phone there said, "The situation has been resolved, so there is no story. Good-bye."