JewsOnFirst.org Advisory Board Member Plays William Jennings Bryan in The Great Tennessee Monkey Trial, Talks With Us About the Play and Protecting the Teaching of Evolution 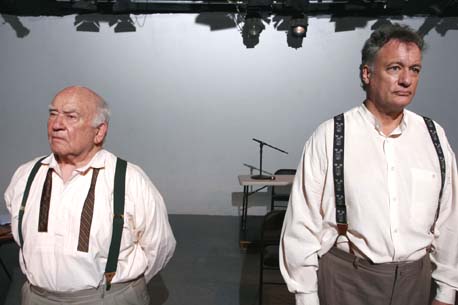 Ed Asner is currently on tour with The Great Tennessee Monkey Trial, a cautionary play for our times. The play, as he explains during a recorded interview, uses transcripts of the 1925 trial -- a test case, really -- of a Tennessee high school teacher for teaching evolution. The trial attorneys, William Jennings Bryan and Clarence Darrow, were towering figures of the early 20th century; the trial proceedings were the first ever broadcast live on the radio.

During our telephone interview, recorded during his tour with the play (there are links below to some of its reviews and to a CD of an earlier performance), Asner recounts the situation that created the trial and its aftermath, with laws throughout the Bible belt mandating the teaching of creationism.

The nation only came to grips with the resultant science deficit when the Soviet Union launched Sputnik in 1957. But even now, Asner says, the United States leads all other nations in the percentage of people who believe the earth was created in six days, as related in the Bible, rather than evoluting over millenia.

"This battle will never be finished in this country. It must be fought constantly and perpetually and those people who believe in Darwinism must never rest because the enemy lies out there in great numbers," Asner says. Please listen to the 18-minute interview.