Aggressive Slavic Christian immigrants are terrorizing gays and lesbians in Sacramento. These militants, organized through their churches, have been in the forefront of religious right opposition to legislation promoting respect of gays and lesbians in California's public schools. So fierce has that opposition been, that the bill's author was forced to remove one of its two sections. 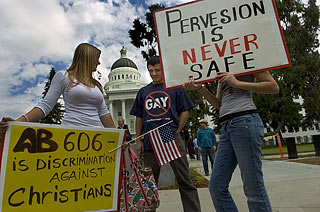 Such a retreat is unusual in California, a blue, generally gay-friendly state. But Gov. Arnold Schwarzenegger, in response to the religious right's onslaught, promised to veto the measure, Senate Bill 1437, before the legislature even acted on it.

Deleting that language was necessary to save the other part of the bill, according to Alice Kessler, the legislative advocate for Equality California, which works for LGBT civil rights on a state level and is the sponsor of SB 1437. The remaining language, Kessler told JewsOnFirst, "protects against adverse portrayals of people from stereotypes based on religion as well as sexual orientation."

Sacramento LGBT community shaken
This legislative action takes place against a background of anti-gay protests by militant Slavic Baptists and Pentecostalists that have shaken the Sacramento area lesbian and gay community.

According to the Sacramento Bee:

Gays say the Slavic protesters have hit them with signs, spit on them and displayed a menacing lack of civility. Gay leaders have met with local police and press to say they're worried about violence, and now they're forming a "Q Crew" -- a new political activism group -- to tell the public their fears.

Kessler described a Queer Youth Advocacy Day organized last March by Equality California that brought youth from around the state to Sacramento to press for SB 1437 and other safe schools measures. The young activists rallied where their permit specified: on the Capitol grounds. Slavic militants aggressively counter-demonstrated and, according to Kessler, the police let them congregate near the Capitol, rather than across the street where they were legally required to stay.

On April 26th, set aside as the Day of Silence in support of tolerance of GLBT students, Slavic high school students in several districts wore T-shirts condemning homosexuality; the shirts had the word "gay" in a red circle with a red slash through it.

Some of the t-shirted students were suspended, bringing on more protests, according to news reports.

Kessler called the messages on those T-shirts "troubling." That symbol, she said, "suggests that a group ought to be eliminated."

At one of the Day of Silence events last spring, there were reports of Slavic protesters spitting at students observing the day.

Also last spring, at least 1,000 Slavic militants staged a demonstration at the Capitol calling on Gov. Schwarzenegger to veto S.B. 1437, according to the Sacramento News & Review..

In June, militant Slavic Christian hecklers were out in force at Sacramento's gay pride parade. According to the Sacramento Bee, they were swinging signs and shouting at the marchers.

Targeting schools
Gretchen Bender, who was recently elected to the Sacramento County Board of Education (and is the county's first openly lesbian elected official), told JewsOnFirst that several hundred Slavic militants packed the Sacramento city school district meeting when the board was voting to support non-discrimination and the Day of Silence.

She said that several Slavic Christian protesters showed up at her swearing-in last month. She also said that Slavic militants "send their teenagers to picket at local high schools with anti-abortion signs." 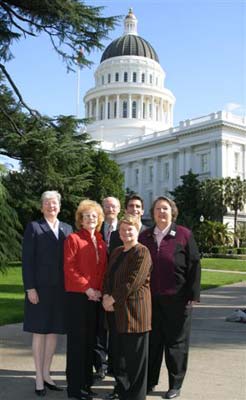 Sen. Kuehl's statement
In a statement emailed to JewsOnFirst, in response to a request for comment, Sen. Kuehl addressed both the changes to SB 1437 and the protestors attacking it. Kuehl (pictured here, at front, with the legislature's LGBT Caucus) said:

In the face of endless distortions and falsehoods, let me make clear once again that my bill, SB 1437, simply adds gays and lesbians to a list, currently in California law, of groups who have historically been ignored or defamed in popular culture and who may not, under law, be portrayed adversely in official school materials or activities.

I believe, as a general principle, that schools should be a safe place for our students, a place that sets an example for our ability to live as fellow citizens in a pluralist, diverse democracy. SB 1437 absolutely does not limit free speech based on religion or based on anything else. Christians, like other Californians, are, and will remain, free to express their deep moral convictions and political views.

I do believe, however, that one function of public schools in a democracy such as ours is the training of students to exchange fervent views about vital issues in a civil and respectful way, without defamation or intimidation. Such education is especially important for students who come from authoritarian societies without a democratic tradition of free and lively civil discourse.

Schools have every right to insist on policies that curb violence and that protect the right of every student to get an education in a safe and appropriate environment. SB 1437 is simply about protecting students against official negative stereotyping and helping our young people develop the skills to participate in the society in which they live and are expected to function.

Religious right implacable
The legislature's lower house, the Assembly, approved the change on August 7th. But stripping down SB 1437 did not placate the religious right.

The Traditional Values Coalition emailed out an that warned:

This amendment is nothing more than a cheap political shell-game to tempt Governor Schwarzenegger to sign this despicable bill, which would openly advocate the promotion of the homosexual/transgender lifestyle while banning all religious viewpoints to the contrary!

This bill is rooted in anti-religious bigotry and is incredibly dangerous to our kids.

What remains of SB 1437 would ban textbooks, teachers, and school boards from providing instruction, sponsorship, or material to students that would “reflect adversely” on homosexual, bisexuals, and transgender people!

Another religious right website, Campaign for Children and Families (CCF), which is linked to the Slavic militants, scoffs at the stripped-down bill. "The effect of the bill is unchanged," said the website. The group's news release said it still expected Schwarzenegger's veto.

Scant details about origins of Slavic Christians' activism
The Sacramento Bee, citing community leaders, puts the number of local Slavic evangelical Christians at around 30,000. They emigrated over the last decade or so from Russia, Ukraine, Uzbekistan and other parts of the former Soviet Union.

Little could be immediately learned about the origins of the several Slavic Christian churches mentioned in the news reports cited below. The Bee quotes several activists speaking of religious persecution in the old Soviet Union.

The Bee and other reports say the Slavic Christians believed that they were coming to a Christian country.

Thomasson told the Bee he credits the Slavic Christians with persuading Gov. Schwarzenegger to oppose SB 1437. 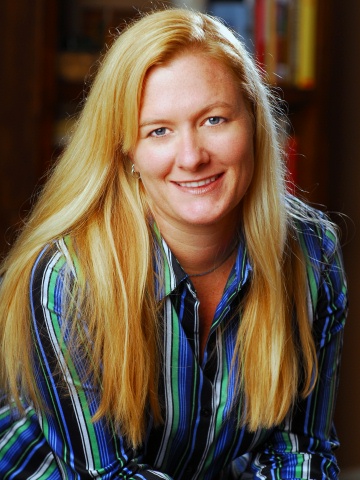 Board of Education member Gretchen Bender (pictured at left) said that the Slavic Christians have joined forces with a small "hard-core" religious right group that uses trucks with large billboards. The group changes the billboards depending on whether they are protesting a woman's right to choose or gay rights.

This matches the description of Pastor Richard Otterstad of the tiny Church of the Divide in El Dorado in both the Capitol Weekly and News & Review. He told the Weekly that he made the connection by attending meetings of a Slavic pastors assocation.

The Pacific Legal Foundation, a right-wing law group, reportedly represents some of the students suspended for wearing shirts with hateful expressions on the Day of Silence.

Potential for reconciliation -- or power
Kessler of Equality California takes exception to the prevailing notion that the Slavic Christians are puppets of the extreme right. "These are their genuine beliefs and we have to respect that," she said. And, she added, "they have to respect that California is a diverse state."

Christian communities are themselves very diverse, Kessler continued, and many support LGBT rights.

She said that some LGBT community members are reaching out to establish communication with the Slavic Christians. "Where we have the opportunity to have meaningful interface, that's good," she said.

The Slavic Christians have their First Amendment rights, Kessler said, "but people also have a right to feel safe."

Gretchen Bender regrets that moderates did not try to engage with the Slavic Christians when they arrived and "educate them about what it means to be an American." Now, she said, "it seems to me that the fundamentalist Slavic community is missing the point of what it is to be American. They've escaped persecution to persecute."

She continued: "They see it as the LGBT community trying to impose on them." And now, "it's hard to find a starting point."

Bender believes that the Slavic militants do not have the potential to attain power through the ballot box, but, can exercise considerable power by intimidation. "As a voting block, they're not so dangerous," she said. "They can't skew elections. But they're vocal and active, so they scare the politicians.