"The state should get out of the marriage business altogether" 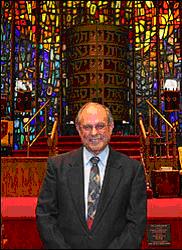 Dr. Elliot Dorff is a Conservative rabbi and Rector and Sol and Anne Dorff Distinguished Service Professor in Philosophy at the American Jewish University. He has a Ph.D. from Columbia University in philosophy and is the author of over 150 articles and numerous books, most recently For the Love of God and People: A Philosophy of Jewish Law. In our conversation Dorff said that the state should limit itself to civil arrangements: