Leaders of the hardcore Christian right gathered under a Confederate flag in Maryland on July 3rd to honor Roy Moore, the deposed Alabama Supreme Court chief justice. That flag, and those present beneath it, concatenated Christian nationalism and Southern irredentism.

The day's honors included the naming of an athletic field after Moore, the unveiling of a "Marylandized" Ten Commandments "monument" -- nearly identical to the one that Moore famously installed in his Alabama courthouse -- and the presentation to Moore of a cake decorated as a replica of the Alabama monument.

In his acceptance speeches Moore repeatedly called for the "sovereignty of God in this country" and for the acknowledgement of God as the source of the laws of the United States. At one point he engaged in some religious bigotry.

Alabama and the federal government removed Moore from office in 2003 after he refused court orders to remove the Ten Commandments monument from the courthouse. The incident made him a hero of the religious right.

There is no confusing the identity of the Confederate flag that flew over the stage during the ceremony honoring Roy Moore.

The flag is a seven-star version of the first flag of the Confederacy, known as the "Stars and Bars." Other versions of the design have additional stars. The website "Flags of the Confederacy" shows photos of the seven-star Confederate flag flying over a "liberated" Fort Sumter in 1861 and a seven-star flag used by the Alabama 7th Infantry Regiment.

In case you wanted to buy one.

There is no confusing the identity of the Confederate flag that flew over the stage during the ceremony honoring Roy Moore.

The flag is a seven-star version of the first flag of the Confederacy, known as the "Stars and Bars." Other versions of the design have additional stars. The website "Flags of the Confederacy" shows photos of the seven-star Confederate flag flying over a "liberated" Fort Sumter in 1861 and a seven-star flag used by the Alabama 7th Infantry Regiment.

In case you wanted to buy one.

The Confederate flag, alongside the state flags of Maryland and Alabama, stood over the concrete-slab stage used for the dedication of Roy Moore Field and the monument-unveiling ceremony.

Roy Moore Field is within Ten Commandments Park, which, in turn is within Gladway Farm, owned by the Peroutka family. The Law Offices of Peroutka and Peroutka and the Institute on the Constitution, sponsored by the law firm, were sponsors of the conference.

Michael A. Peroutka, who was the 2004 presidential candidate of the far-right Constitution Party and a supporter of Roy Moore's fight to remain Alabama's chief justice, emcee'd the ceremony.

"Behind you," he said, gesturing to the three flags flanking the stage, "you see the Maryland flag, the Alabama flag and the American Flag." The last was a reference to the Confederate Flag.

Peroutka brings secessionism and Christian nationalism together. He presents the Moore case in Christian nationalist terms. In a 2004 campaign news release he wrote that Moore's case "was, and is, the cause of religious liberty, the cause of Christ." Peroutka was making the point that then Republican presidential candidate and avowed Christian President George W. Bush "could have traveled to Alabama and personally stood with Chief Justice Moore in this vitally important battle to defend God and His Word. I would have."

The Institute on the Constitution, sponsored by Peroutka's law firm, offers classes and lectures "designed to re-acquaint the American people with our history, our heritage, and our Constitution, which is the very foundation of our Republic." Almost all the recent and future classes listed here are entitled "A Study on Christianity and the Law of the Land." 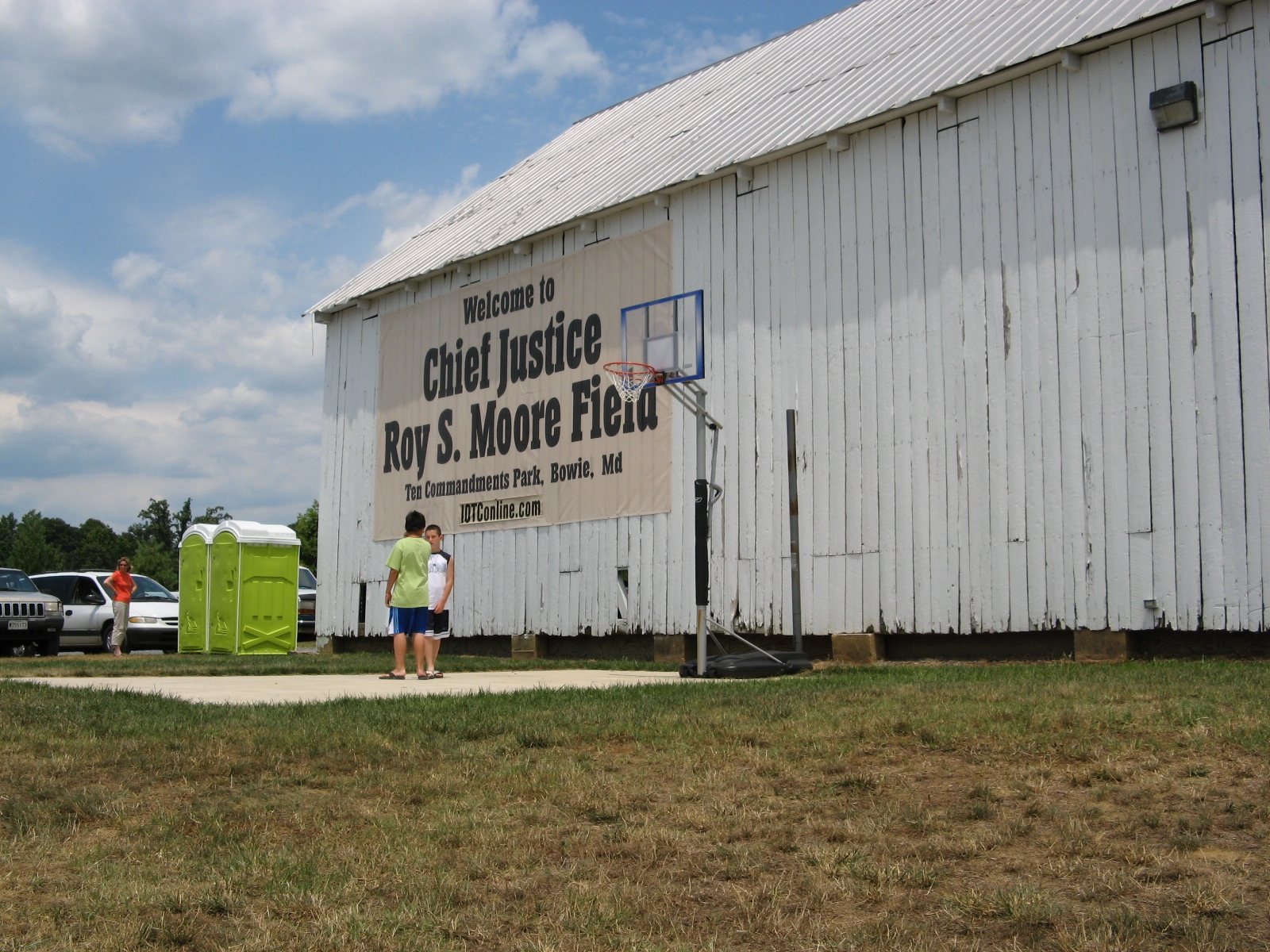 In its membership application, the League of the South states its intention to: "Advance the interests and independence of the Southern people" and to "[d]efend the historic Christian faith of the South and return the regulation of religion and morals to the jurisdiction of states and local communities."

The League endorsed Peroutka's presidential candidacy, stating that, although normally "the League encourages its members to withdraw their consent from the American imperial regime, and that usually means declining to participate in their rigged and fraudulent national elections," it was encouraging its members to vote for him in the 2004 election.

Peroutka was a keynote speaker at the League of the South's 2006 convention in Chattanooga, according to the group's website as well as the website of the Tennessee league.

Local legislator not bothered by flag
Delegate Don Dwyer, a member of the Maryland legislature who emcee'd earlier conference sessions, was present on the stage during the unveiling of the monument. Contacted on July 7th by JewsOnFirst, Dwyer said the Confederate flag did not bother him.

"I don't have a problem with it," Dwyer said in a telephone interview.

Dwyer described Peroutka as "a staunch supporter of the Southern position on [the Civil] War" who "honorably flies that flag."

Herb Titus was the 1996 vice-presidential candidate of the Constitution Party, according to Wikipedia. In her book Kingdom Coming, Michelle Goldberg describes Titus as a "prominent adherent of Christian Reconstructionism" (p. 158).

Titus was the founding dean of Pat Robertson's Regent University Law School. Sara Diamond writes in her book Not By Politics Alone, (p. 107) that in the early 1990s, when Robertson tried to get accreditation for the law school, "Titus was forced to resign when he refused to renounce his belief in Christian Reconstructionism."

Titus is currently associated with Roy Moore's Foundation for Moral Law as is attorney Ben Dupree, another "dignitary" (Peroutka's term) on the stage.

John Lofton, a writer and political aide in Peroutka's 2004 campaign, is co-author with Christian Reconstructionism founder R.J. Rushdoony of The Great Christian Revolution. Lofton currently edits the American View website, which has the same address as Peroutka's Institute on the Constitution and features Michael Peroutka and Stephen Peroutka, an anti-abortion activist.

Also seated under the Confederate flag was former Alabama Supreme Court Associate Justice Tom Parker. A Moore ally and onetime spokesman, Parker was defeated in a June 2006 run for chief justice. (Moore lost his bid for the Republican gubernatorial nomination in the same election.) In the months before his defeat Parker called for resistance to a Supreme Court order sparing a juvenile from the death penalty.

Roy Moore speaks
Roy Moore himself did nothing to indicate discomfort with the Confederate flag. After Peroutka's daughter unveiled the Ten Commandments monument, Moore expounded on its purpose -- "to remind judges of the source of our law." As he had over the cake, he mentioned references to God in various documents carved in the monument.

Moore spent almost as much time reading a poem he'd written as he did on his remarks. The poem decried the current "godless" state of government where children are not allowed to pray in school but are "taught evolution" and "abortion is no longer called murder and sodomy is deemed a right."

Concluding his remarks, Moore said, "We've got to fight for the right to preserve the acknowledgement of the sovereignty of God in this country. That's what it's all about."

A recording of the ceremony is below. (There is occasional wind noise in the recording.)

Del. Dwyer was adamant that acknowledging God as the source of the laws and freedoms of the United States was not an effort to reframe the "establishment clause" of the First Amendment, which bars Congress from establishing or favoring a religion. "There is no intent on our part to reframe or redefine" it, he said in the interview. Then he added: "The intent of the First Amendment was never to remove religion from government." 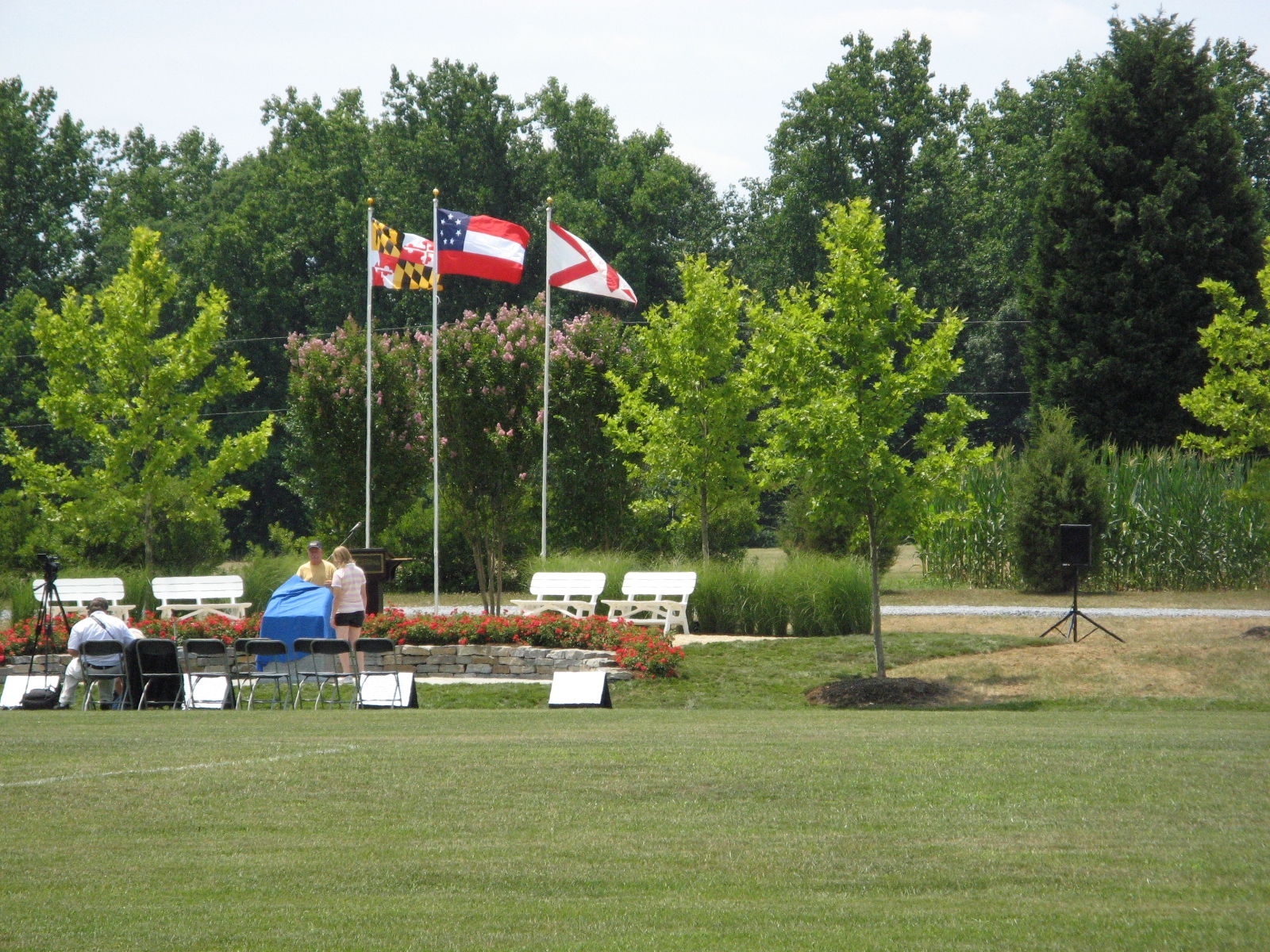 But, according to Professor Robert Tuttle of George Washington University Law School, such an acknowledgement would violate the First Amendment's injunction against government establishment of religion.

Americans United for Separation of Church and State, which observed earlier sessions of the conference, reported that, while serving as emcee, Dwyer claimed that his only duty in the legislature was to enforce God’s law. Americans United was among the organizations that sued to have Moore's sculpture removed from the courthouse.

The Ten Commandments cake and a swipe at the Goddess of Justice
Before the monument unveiling, as attendees finished a (free) catered barbecue under a tent placed on the opposite side of Roy Moore Field from the stage, Michael Peroutka presented Moore with a large cake replica of his Alabama Ten Commandments monument. 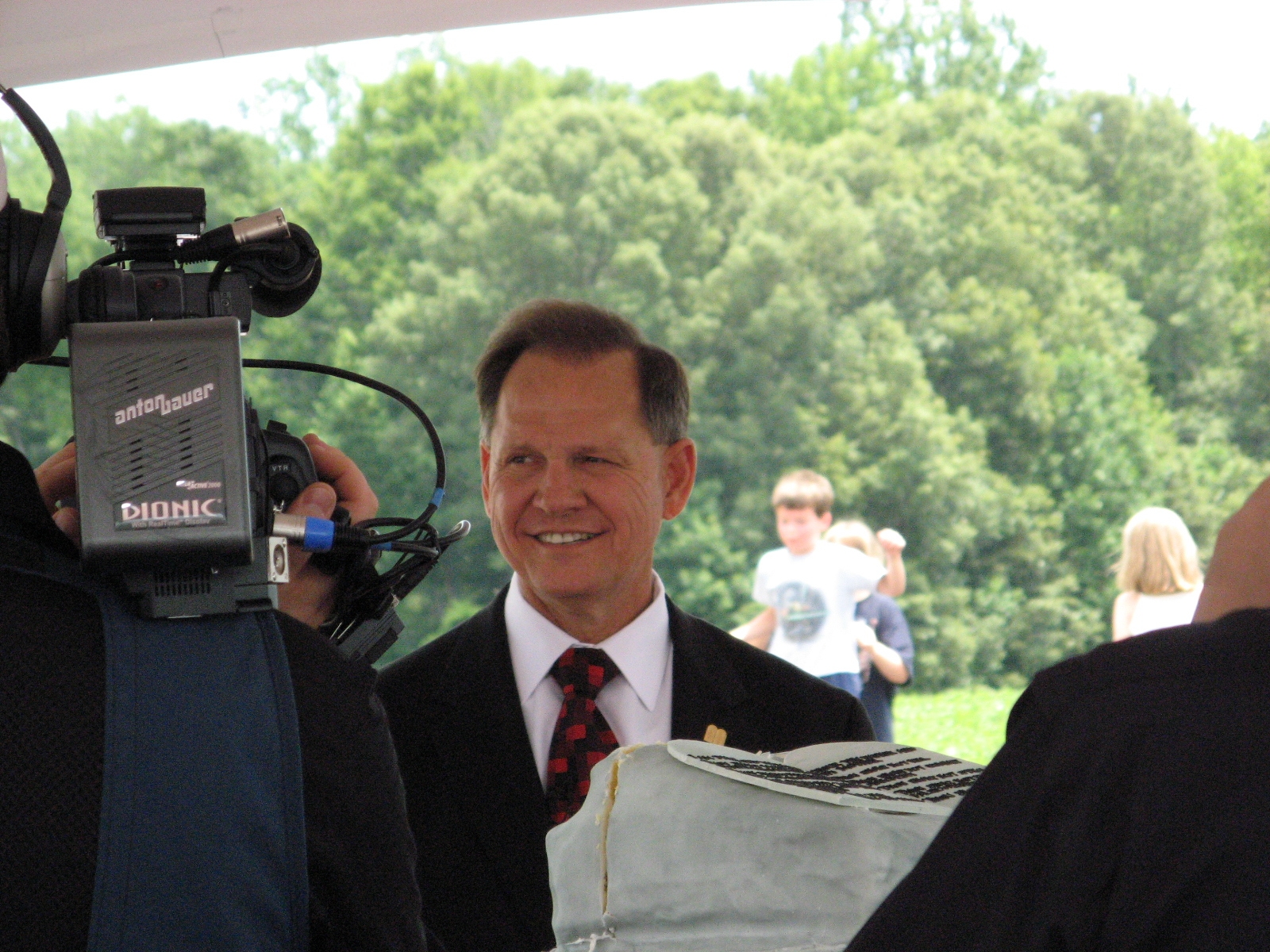 After expressing his delight, Moore walked around the cake, pointing out its references to God in U.S. founding documents. He quoted snips of Blackstone's legal commentaries and the Declaration of Independence, saying the natural law they referred to -- "God's revealed law" -- gave the United States the right to exist as a nation. He also quoted Blackstone as saying that no human laws "are of any validity" if they contradict nature's law, which Moore kept identifying as "God's law."

Then Moore worked up the picnickers with some religious bigotry. Moore said "Mind you, this is the form of the monument that they took out of the Alabama Supreme Court, while outside, in front of the federal district court, is a bust of a Greek goddess, Themis, the goddess of law, justice."

Moore's audience made a disparaging noise. He continued: "So while they're putting up foreign gods, foreign idols, and things which have no basis for our Constitution and rights --- as a matter of fact, that god represents a discrimination of rights, whereas our god represents equality for all men." (A short recording of Moore's remarks about the cake is below. Please note that part of the recording has wind noise.)

A PDF document on the Montgomery federal court's website about a recent expansion of the court complex includes this description of the statue.

To enter the new courthouse, the public crosses a 200-foot elliptical brick and granite plaza, surrounded by grass and a row of maple trees, and flanked by a grove of 50 crepe myrtles. Centered in the plaza is a large granite pool and fountain bearing a stainless steel sculpted head of Themis, the ancient Greek goddess of justice, with water flowing over two stainless steel bowls representing the scales. The entryway, through bronze and glass doors, is crowned by a huge eagle poised for flight, sculpted from a single block of limestone.

(Citation for the document can be found on this page, where you see History of the Middle District of Alabama U.S. District Court.)

Several days before Moore unveiled the "Marylandized" version of his Ten Commandments monument, historian Randall Balmer said Moore had turned the commandments into a "fetish," according to the Associated Baptist Press.

Speaking to a meeting of mainstream Baptists in Washington, DC, Balmer said: "Why not post the Decalogue in public places? Because, quite simply, it trivializes the faith and makes the Ten Commandments into a fetish." He added: "What Roy Moore was peddling was idolatry, pure and simple -- a conflation of the gospel with the American political order."