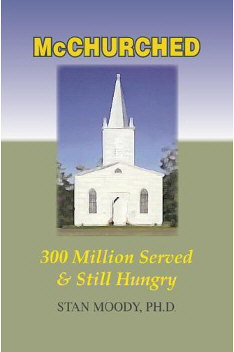 Stan Moody is a Maine State Representative and pastor of the North Manchester Meeting House Church in Manchester, Maine. He is also the founder of the Christian Policy Institute, which calls itself a “voice for thoughtful believers.” During his first term in the legislature, Moody, an ordained Baptist minister with a Ph.D. in Theology, left the Republican Party for the Democrats.

In his new book, McChurched: 300 Million Served & Still Hungry, Moody draws on both his political and religious vocations to critique the religious right's political use of religion. He writes:

It comes down to a simple formula. Those making the racket in the public square want to restore in America what they consider to be its former Christian roots. I call that group the Christian Right that has in recent years physically and philosophically merged with the Republican Party. Their approach is hardly distinguishable from any other political movement, and they are not averse to condemning others with biblical pronouncements that are familiar only to those in the Christian ghetto that passes as church.

The Christian Policy Institute website says that Moody calls this merger "an alarming development and an outright rejection of the Christian faith.

You can buy a copy of the book by clicking here .

When the Church Tires of the Desert: The Enemy Within

by Stan Moody, PhD; excerpt courtsey of the author

In this chapter, Moody focuses on the religious right's efforts to turn away from inclusiveness and equality in favor of majority dominance. He writes: "[T]he mantra that America was founded as a 'Christian nation' is a direct attack on the rights of people of any and all religions to worship freely. It is the intention of the Republican Christian Right to adorn the public square with Christian symbolism, to the exclusion of all other religions." To read this chapter (in PDF format), please click here.

I believe that history will mark September 11, 2001, as the date that America lost its spirit, but for reasons that have little to do with terrorism. That was the date that galvanized American Evangelicals to merge with the Republican Party.

My moment of final departure from the faith of either came when a prominent Christian lady in my District told me, “Shut up and get behind the President.”

Things have gotten worse since then. Continue reading this PDF document.