We are intimately attached to nature and each other...

...a commentary for Tu b'Shevat, the Jewish Arbor Day 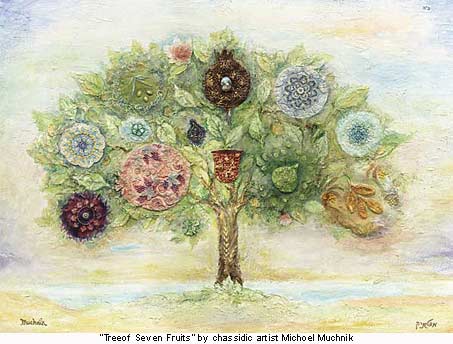 The little holiday of Tu b'Shevat (the fifteenth day of the Hebrew month of Shevat) is called Jewish Arbor Day. Jewish tradition especially the Jewish mystics -- Kabbalists -- had a "thing" for trees. Mystics, who taught spiritual matters by analogy, imagined that the trees' roots are a hint of the unseen worlds. Because the aboveground parts of trees -- the trunk and branches --are so stark in their leaflessness at this time of year, the first buds, to sprout were a sign of hope.

But also, and more suggestively for the mystics what is "above ground" is mirrored by what is below the ground. The root system is as deep, circuitous and complicated as the above-ground branches are complex and wondrous. For Jewish mystics, the "roots" symbolized our unseen connectedness. They imagined our souls to be our "roots above" and all souls to be connected to the root soul of the world -- God. So ultimately this "roots above" system connects each and every person and every aspect of life to others and, ultimately, to God.

Global awareness through our human connectedness affects nature for good or ill
This year the holiday of Tu b'Shevat falls on February 3rd. It is celebrated by eating certain fruits and vegetables with symbolic importance. Native to Israel, the almond tree, called a She-kedi-yah, is the quintessential tree symbolizing the holiday. Legend has it that in Israel the almond tree is always the earliest to bloom, even before official spring.

The message of Tu b'Shevat has expanded from planting trees at homes and synagogues, and ordering tree certificates for Israel, to a major focus for rallying to repair the fragile "little space ship," the Earth.

As if we needed a reminder of the urgent need to repair the planet, this winter was an ominous one, with its unusually cold and even freezing weather in the California's Central Valley, the source of much of America's winter fruits and vegetables. In the Eastern United States winter didn't begin until January. Snow was almost non-existent in Europe until December. Fish stocks in our oceans are dangerously low, while jellyfish proliferate. Global warming is a fact. Our global connectedness and responsibility for our ailing planet is plainly evident.

I remember the first Earth Day in 1970. We had our first lessons in global connectedness. How much the world has changed. Or has it? How much have our attitudes changed?

1970 was my first year of rabbinical school. The winds of change seemed be blowing. It seemed then that all wisdom flowed in one direction -- from the "world" into Judaism. I had not yet understood the powerful resonance of the ancient traditions of Judaism's "nature" holidays. In those days, Judaism's teachings of balance and harmony with nature -- the profound analogy of how we are all connected through a "roots above" -- were hardly appreciated. .

Judaism, while possessing remote potential, needed a major revamping to be made relevant to Jews and to a world on the verge of grappling with the ecological issues. Judaism's teachings about planting trees, rotating crops, and not needlessly destroying nature had not yet emerged into the world of ecology.

A series of inchoate ideas about religion and ecology were not yet fully articulated. Those ideas are much clearer today, in the midst of our winter of ecological discovery.

Religions must stop blessing war!
We understood so little about war during 1970s. During the U.S. war in Vietnam, religion was still committed to blessing war.

There was an automatic assumption that religion was in the docket for being the opiate of the people but even worse was the charge of religion as the generator wars. Now we understand that religion is often used as a smoke screen for not addressing real issues of poverty, lack of health care, and hopelessness.

Today, the leading voices in liberal religious circles are inspired by a goal of bringing reconciliation and healing. We are encourageing the first world to hear the voices of the third world. To listen to the voices of others is to take a first step away from earth destroying activities: war and the preparation for war.

Global warming and climate change are real and disastrous.
In the 1970s Professor Lynn White and others claimed that the degradation of the world was authorized in a very narrow reading of Genesis 1:26-28: "Master the earth and exercise dominion over it [her]." They read the verse fragment as a commandment. White and his colleagues saw the verse and the attitude that flowed out of it as the arch-culprit. White claimed that the Bible, through that specific verse, authorized ecological disaster and the domination of women and people of color. Writ large, the misreading of the Bible was leading us to the destruction of the life chances of the human race and all species.

At that time White’s claim seemed outrageous but today we accept his assertions as prophetic. At the same time, we see the rise of many who claim ‘biblical sanction’ for all kinds of unjust and counterproductive attitudes and beliefs, especially among the biblical literalist "dominionist" Christians. (See Chris Hedges' new book American Fascists: The Christian Right and the War on America.)

While the degradation of the earth is a bi-product of rapid, unchecked population growth, development, and industrialization, humans can make things better, as well as worse. No one who reads the Bible is authorized to dump tailings from mines and chemicals into water. Nor are they licensed to destroy the ozone layer with freon from air conditioners, hair spray, Agent Orange or greenhouse gasses.

In the 1970s some people responded to the warnings about the impact of overpopulation and the threat to the environment of global warming. Others refused, though, and quickly formed themselves into a later-day flat earth society.

Also during the 1970, arguments for birth control, species preservation and conservation were dismissed as the ravings of mad people. Today's dismissers are quoting verses from the Bible to justify policies that continue environmental degradation.

One of the most ominous events this winter was large chunks of the polar ice caps breaking away into the ocean. In December a chunk the size of 11,000 football fields broke off and began a journey out into the ocean.

I hope every one will see the Al Gore's documentary movie , An Inconvenient Truth, which teaches us a lesson of our interconnectedness. Perhaps we can be like that almond tree, She-kedi-yah, a harbinger of concern for a more ecologically balanced and peaceful world.