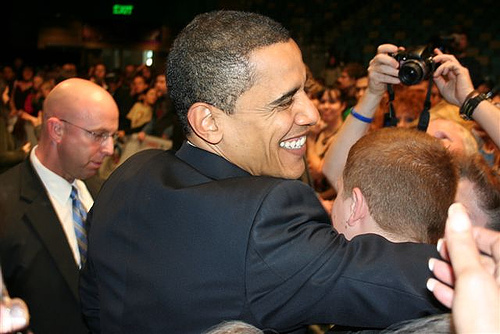 Only weeks ahead of primary elections in the states with the largest Jewish populations, Jewish organizational leaders and elected officials condemned a pernicious email calling Barack Obama a secret Muslim. The email has been circulating on Jewish lists for at least a year.

It is dismaying that the major Jewish organizations and Obama's Jewish colleagues did not confront this issue earlier.

A year ago we saw forwarded emails alleging that Obama was a covert Muslim with a "madrassa" education and ties to radical Muslims.

One of the falsehoods in the email, "Osama (sic) was enrolled in a Wahabi school in Jakarta," returns more than 600 Google results, complete with the coy misspelling of the candidate's name. One of those links goes to a My Space forum posting on January 12, 2008.

Debbie Schlussel, a Jerusalem Post columnist and "Conservative Info-Babe Commentator" (as described by a "fan club" linked from her website), heavily promoted the lie about Obama's religion on her blog, juxtaposing a photo of Obama with a Muslim crescent symbol. Schlussel claimed that the Hillary Clinton campaign was investigating Obama's background and "agreed" with her about his Muslim identity.

Schlussel cited as her source a report in Moonie-owned Insight magazine. According to James Ridgeway, blogging at the UK Guardian and other sources, the Clinton campaign has denied the allegations in the Insight report.

A year ago the Anti-Defamation League cited the allegations in the emails as an Internet rumor and said the emails were "widely circulated."

Obama has been obliged to repeatedly deny the false rumors that he is a Muslim and assert that he is a Christian. Those denials and the video below are compiled on his campaign website.

The Jewish leaders' condemnations come so late, though, that they might well be perceived as insurance -- should Obama lose the "Super Tuesday" primaries on February 5th -- against charges that Jews sabotaged his campaign.

According to James Besser, writing in the New York Jewish Week, the emails have been effective in diminishing Jewish support for Obama's candidacy.

We believe that the tardy Jewish response to the smearing of Obama is, at least partly, the result of Jewish organizations' expanding cooperation with Christian Zionists such as Pastor John Hagee's Christians United for Israel. We have been reporting on this trend here for the past 18 months.

Hagee's stock in trade is bashing Islam. Nevertheless, many Jewish organizations pressure rabbis and congregations to participate in Hagee's nights to honor Israel.

We believe that a second factor contributing to the civic and moral lapse by Jewish organizational leaders is the popularization of of the concept of "Islamo-fascism." Virulent anti-Muslim bigotry has long festered within the Jewish far right and fundamentalist Christianity. But this year the Jewish-Christian duo of David Horowitz and Ann Coulter staged "Islamo-fascism awareness" events on campuses around the country with the evident intent of popularizing anti-Muslim bigotry.

Note: On January 28th Sen. Obama initiated a conference call with Jewish reporters in which he addressed the smear campaign and urged Jewish media to be a "megaphone" for denouncing the lies. You can listen to the call here.

An Open Letter to the Jewish Community:

As leaders of the Jewish community, none of whose organizations will endorse or oppose any candidate for President, we feel compelled to speak out against certain rhetoric and tactics in the current campaign that we find particularly abhorrent. Of particular concern, over the past several weeks, many in our community have received hateful emails that use falsehood and innuendo to mischaracterize Senator Barack Obama's religious beliefs and who he is as a person.

These tactics attempt to drive a wedge between our community and a presidential candidate based on despicable and false attacks and innuendo based on religion. We reject these efforts to manipulate members of our community into supporting or opposing candidates.

Attempts of this sort to mislead and inflame voters should not be part of our political discourse and should be rebuffed by all who believe in our democracy. Jewish voters, like all voters, should support whichever candidate they believe would make the best president. We urge everyone to make that decision based on the factual records of these candidates, and nothing less.