"Jane Doe" plaintiff tells of her family's experience in exclusive interview with JewsOnFirst.org

Two Jewish families who sued a Delaware school district for unconstitutionally sponsoring religion announced today that they have reached a negotiated settlement with the district. The settlement will require the Indian River School District, which spreads over a large part of southeast Delaware, to implement new policies regarding religion. It also provides compensation to the two families, whose children suffered religious discrimination.

In 2006 JewsOnFirst reported on the case, focusing on the Dobrich family, who felt compelled by threats and anti-semitic harassment to move away from the community. Today we focus on the other family, named "Doe" in the lawsuit, who remained in the school district during the almost three years since the filing of the lawsuit.

Now Jane Doe has given an exclusive interview to JewsOnFirst.org, describing her family's experiences leading up to the lawsuit and while the litigation was going on. Doe said she played a significant role in writing the new policies on religion for the school district. She said that, while the settlement lacks some points the families hoped to win at trial, "it gets enforceable and constitutional policies into place immediately."

She said she decided to talk with JewsOnFirst because her family hopes to help others avoid what they experienced. She said: "As a family, we feel it is important that we do whatever we can to educate others so that more children and families don’t have to suffer through what we have. We only asked that the school district and school board comply with constitutional policies and apologize for their clearly unconstitutional behavior. It's sad for both our families that we have had to endure what we have, considering this should have been a simple matter to resolve."

District imposed Christianity on school children
The lawsuit grew out of a series of incidents in which the district fostered Christianity and imposed it on children in the schools, including the Dobrich and Doe children. The culmination of these incidents came at the end of the school year in 2004.

First, during a 2004 high school graduation ceremony, a pastor invited by the school board singled out Samantha Dobrich, the sole Jewish graduate. According to the complaint filed in the case, the pastor singled out Samantha in his invocation: "I also pray for one specific student, that You be with her and guide her in the path that You have for her. And we ask all these things in Jesus' name and for his sake." 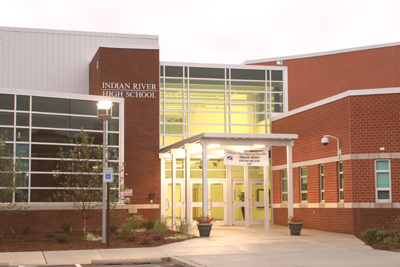 Even worse than the ruined graduation was the community's hostile response when the Dobrich family sought to raise their concerns about the graduation and the pastor's role in it. According to the lawsuit, the Dobrich family became the focus of public hostility, including telephoned threats. Samantha's younger brother Alexander's classmates began calling him "Jew boy" and accused him of "killing Christ." He became fearful about wearing his yarmulke.

In August 2004, the Indian River school board responded to the Dobrich family by scheduling a discussion of the graduation. During that meeting, though, the board allowed a mob to verbally assault the Dobriches and a handful of others who spoke in support of pluralism and church-state separation.

Jane Doe said that, with some community members making statements such as "a prayer isn’t worth anything if it isn’t a prayer to Jesus Christ," she felt that Judaism itself was also under attack.

It took courage to attend that school board meeting, Doe said. It was daunting simply to pass through the hostile mob turned out by local churches and the local talk radio station in support of prayer in the schools.

Dobriches forced to move away; Does "endured three years of hell"
Ultimately, the Dobrich family was forced to leave Sussex County; they moved two hours away to Wilmington to avoid the harassment. In the hours after the settlement agreement became public, the Dobrich family expressed satisfaction with the outcome through their attorney Thomas Allingham. He told JewsOnFirst that the family "is very pleased that, at long last, a settlement of their claims has been achieved." He added that the Dobriches are "particularly with the new protections of the constitutional rights of all the children in the district."

The Doe family remained in the community. That was very hard, Jane Doe said. "We endured three years of hell, toughing it out by ourselves. It was hard on us, emotionally and physically."

The Does' request for anonymity, prompted in part by the searing memory of the August 2004 school board meeting, was approved by the U.S. District judge supervising the case. That was very important for the Does, Jane Doe said. "We are very thankful that the judge allowed us to proceed anonymously. It would have been almost impossible to continue to live here and pursue this lawsuit," she added, "without the thin veil of protection of that anonymity."

Jane Doe was astonished, is still astonished, she said, to hear people call her family cowards for choosing to sue anonymously. Staying mute meant letting pass without response or correction upsetting reports in the local media, she notes. 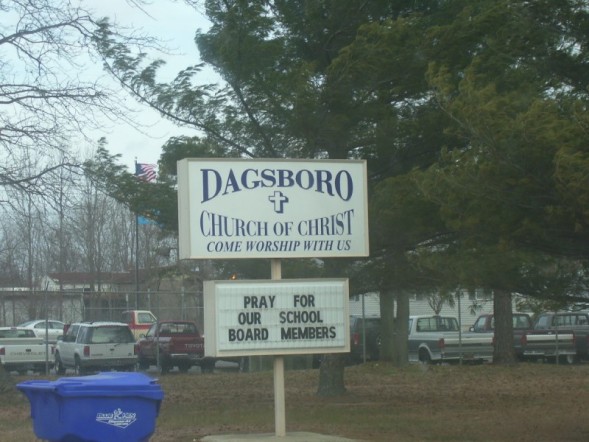 "The media's been rough on us," she said. "They kept repeating myths, like we were represented by the ACLU." Some proponents of school prayer expressed hostility to the ACLU, characterizing it as an instigator of the lawsuit. Jane Doe said that, when an ACLU official spoke at the tumultuous August 2004 meeting, the crowd booed her and told her to "go back up north."

But the ACLU never represented the Does and Dobriches. From the start of their case, Thomas Allingham, a partner in the Wilmington office of Skadden, Arps, Slate, Meagher & Flom, LLP, represented them pro bono.

With the local atmosphere so roiled in the largely rural community served by the district, simply raising the issue of church-state separation was challenging. "It's social suicide to bring up this issue," Doe said. And even after all this time and the satisfaction of correcting the district's policies through the settlement, she still has moments when she wonders "why as a family we have to fight this?"

Doe's assessment of the risks of raising church-state issues is consistent with what JewsOnFirst learned in the course of reporting on the school religion case: there are Jews who have lived in that part of Delaware for years without revealing their Jewish identities.

Even though the Doe family's religion was not specified in the lawsuit, Jane Doe said that they nonetheless have been "characterized as Jewish." She said that prompted her to consider the issue of identity: "As a family, we are proud of our religious heritage. As Jews it has been important to speak out when our children and others were treated unjustly. We all define ourselves in many ways, individually we are Jewish, but as part of a bigger picture, we are just a family within a much larger society who couldn't just sit by and watch when we witnessed wrongs committed in the name of religion."

Doe recalled the period when the judge was considering their request to sue anonymously as very difficult for her family. Even then, though, she said, "We knew that we were doing the right thing. We had a very basic bottom line -- to protect our children." However, she added, "It still feels like they're in harm's way."

The anonymity imposes its own burdens. "We want to be able to talk with people about what's going on with us, about the fear that we felt, about the things the school board has done to drag this case into places where it never should have gone." At one point, she said members of the school board went to the local media, in violation of the judge's orders. "They violated the court order on confidentiality, and nobody did anything about it. And we couldn't say anything about it."

The settlement provides for continuing protection of the Doe family's identity.

August 2004 meeting a searing memory
At least as significant as the raucous August 2004 school board meeting is the silence that followed it. No elected officials stepped forward to admonish the rabble rousers and their followers. Indeed, two members of the state legislature helped lead the boisterous crowd and cheered on the board in its intransigence. Although it strains credulity, it is a fact that, in the three years since the August 2004 meeting, there has been no expression of remorse over the shameful comments and behavior of some of the attendees or concern about the treatment of the Jews who sought a hearing and a policy change.