A large Delaware school district promoted Christianity so aggressively that a Jewish family felt it necessary to move to Wilmington, two hours away, because they feared retaliation for filing a lawsuit. The religion (if any) of a second family in the lawsuit is not known, because they're suing as Jane and John Doe; they also fear retaliation. Both families are asking relief from "state-sponsored religion." 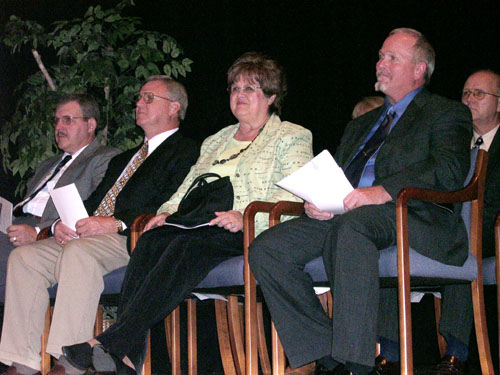 The district spreads over a considerable portion of southeast Delaware. The families' complaint, filed in federal court in February 2005, alleges that the district had created an "environment of religious exclusion" and unconstitutional state-sponsored religion.

Among numerous specific examples in the complaint was what happened at plaintiff Samantha Dobrich's graduation in 2004 from the district's high school. She was the only Jewish student in her graduating class. The complaint relates that local pastor, Jerry Fike, in his invocation, followed requests for "our heavenly Father's" guidance for the graduates with:

I also pray for one specific student, that You be with her and guide her in the path that You have for her. And we ask all these things in Jesus' name.

In addition to the ruined graduation experience, the Dobrich-Doe lawsuit alleges that:

The Dobriches said the prayers to Jesus' ruined the graduation experience for Samantha. Mona Dobrich, Samantha's mother, repeatedly called district officials to complain. A board member told her she would have to get the matter put on a meeting agenda -- then refused to put it on the agenda. The school superintendent slipped the topic onto the agenda and then told Mona Dobrich she would need to raise it during the public comment period.

School board unyielding
The board opened the June 15, 2004 meeting at which Dobrich was prepared to speak with a prayer in Jesus' name. The board was not forthcoming to her request that official prayers be in "God's name" rather than in Jesus' name. The high school athletic director veered from his agenda topic to encourage the board to keep praying in Jesus' name.

Board member Donald Hattier followed Dobrich out and offered to "compromise" by keeping graduation free of prayers to Jesus. And, according to the complaint, he warned her not to hire a lawyer.

A large crowd turned out for the next board meeting and many people spoke in support of school prayer. Mona Dobrich spoke passionately of her own "outsider" experience as a student in Indian River District schools and of how hard she'd worked to make sure her children didn't also feel like outsiders.

Hattier again approached her after the meeting. This time, the complaint alleges, he told her he'd spoken with the Rutherford Institute, a religious right legal group.

Talk show calls out a mob
The district board announced the formation of a committee to develop a religion policy. And the local talk radio station inflamed the issue.

On the evening in August 2004 when the board was to announce its new policy, hundreds of people turned out for the meeitng. The Dobrich family and Jane Doe felt intimidated and asked a state trooper to escort them.

The complaint recounts a raucous crowd that applauded the board's opening prayer and then, when sixth-grader Alexander Dobrich stood up to read a statement, yelled at him "take your yarmulke off!" His statement, read by Samantha, confided "I feel bad when kids in my class call me Jew boy."

A state representative spoke in support of prayer and warned board members that "the people" would replace them if they faltered on the issue. Other representatives spoke against separating "god and state."

A former board member suggested that Mona Dobrich might "disappear" like Madalyn Murray O'Hair, the atheist whose Supreme Court case resulted in ending organized school prayer. She disappeared in 1995 and her dismembered body was found six years later.

The crowd booed an ACLU speaker and told her to "go back up north."

In the days after the meeting the community poured venom on the Dobriches. Callers to the local radio station said the family they should convert or leave the area. Someone called them and said the Ku Klux Klan was nearby.

"Killing Christ"
Classmates accused Alex Dobrich of "killing Christ" and he became fearful about wearing his yarmulke, the complaint recounts. He took it off whenever he saw a police officer, fearing that the officer might see it and pull over his mother's car. When the family went grocery shopping, the complaint says, "Alexander would remove the pin holding his yarmulke on his head for fear that someone would grab it and rip out some of his hair."

The Dobriches refinanced their home so that Mona and Alexander could move to Wilmington, away from a situation that had become untenable, while Marco stayed behind because of his job, according to the complaint.

Ultimately, it continues, the expense of two households forced the Dobriches to sell their home. And Samantha was forced to withdraw from the joint program she attended at Columbia University and the Jewish Theological Seminary. She is being treated for depression.

The lawsuit states that the Doe family wants to remain anonymous in order to avoid the retaliation experienced by the Dobrich family. Jordan and Jane Doe are also suffering from depression related to their opposition with the Indian River School District's religion policy.

Elusive religion policy
Even after Mona and Alexander Dobrich moved to Wilmington, the family and its lawyers continued to request the district's policy on religion in the schools and to ask for meetings with the board. Their requests were stonewalled and in February 2005 they filed suit.

In a statement issued through her attorneys and quoted by the Delaware Wave, plaintiff Mona Dobrich, the mother of district students -- and plaintiffs -- Samantha and Alexander, said: "We are not trying to remove God from the schools or the public square. We simply don't think it is right for the district to impose a particular religious view on impressionable students."

The plaintiffs seek to recover damages and to compel changes in the school district's policy.

That policy, however, remains elusive. Invited by a board member soon after the infamous graduation, the Rutherford Institute, prepared a prayer policy for the school board, according to the complaint. In October 2004 the board reportedly adopted a new policy on religion in response to the Dobrich's complaint.

It is unclear if that policy is the one prepared by the Rutherford Institute -- because no one has seen it. The Dobrich's complaint states that the policy was unavailable and when the families requested it the district told them to file a freedom of information request.

This June, the board had a reading of a proposed change in the unseen policy. They said the policy and its changes would be posted on their website, (www.irsd.net) but it is nowhere to be found among several dozen policy documents.

A Rutherford affiliated lawyer, Thomas Neuberger, came into the case representing one of the school board members. Before he left the case last August (because the judge dismissed the individual board members from the case), Neuberger was reportedly feuding with other lawyers. 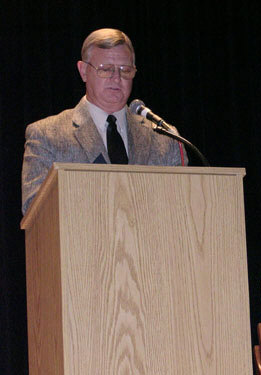 While he was in the case, his client, Reginald L. Helms (pictured at right), reportedly admitted one of the lawsuit's allegations: that school officials invited a Pastor Fike to the 2004 graduation. That undermined the district's claim that students chose the speakers.

Neuberger was quoted by the Delaware Wave newspaper denying that the Dobrich's son Alex was taunted as a Jew by classmates. "I seriously doubt that it ever occurred," he told the paper, contending that the allegation used to "defame the good citizens who serve on this school board."

In its response to the lawsuit, the district reportedly called some of the families' claims "immaterial, impertinent and scandalous," and intended only to cast the district in a negative light.

Settlement rejected
In February 2006, the board unanimously rejected a settlement offer that would have required changing "Christmas" and "Easter" breaks to winter and spring, respectively, and to put a Dobrich child at the top of a waiting list for an arts school. It would have permitted board members to continue praying at their meetings. (US District Judge Joseph J. Farnan, Jr., who is hearing the case, ruled last year that the prayer was a historic tradition and could continue.)

In April the board's insurance company, which had been representing the district in the lawsuit, filed suit against it (and the individual board members) because they had, against its advice, rejected the settlement offer. The board fired the attorneys that had been representing them and hired a new set. The insurance company is reportedly refusing to pay for the board's legal defense from the date the members rejected the settlement offer.

According to the Coastal Point, the insurance company's complaint is sealed, as is the district's response. The district's taxpayers, who will pay the bill if the insurer prevails, cannot know the details of the case.

Attorney Thomas Allingham, who represents the Dobrich family, says the board's behavior suggests it was not negotiating in good faith. Allingham told JewsOnFirst that several board members attended the settlement negotiations before a federal mediator. He said they approved the settlement during those negotiations. But, when the board voted on the offer, they rejected it unanimously.

Allingham said the plaintiffs remained open to the possibility that the case could be settled. But the case is set for trial in June 2007 in Wilmington.