A South Carolina church's shoe giveaway in public schools this month included ritual foot-washing "as Jesus did." That, say Jews who live in the area, is typical of local disregard of church-state separation.

The foot-washing by volunteers with the First Baptist Church of North Augusta, South Carolina, was reported last week by Americans United for Separation of Church and State. 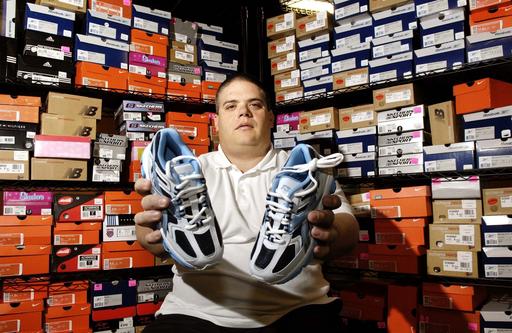 According to news reports and the church's website, the shoe giveaway, a project called Laces 4 Love, collects donations from the community and gets lists of needy children from the schools. Laces 4 Love then writes the children's parents asking for permission for the children to participate in the program and for their children's shoe sizes.

The group then goes from school to school; at each school, children are called into the lunchroom, Laces 4 Love volunteers wash their feet (with wipes, according to news accounts) and then put new socks and shoes on the children's feet.

Denials
Area school districts where the giveaways were held this month denied to local news media that there was any foot-washing or any religious content.

Nevertheless, before Americans United issued its report, the local paper, the Augusta Chronicle, published several references to the practice. In a November 28th story previewing the giveaway, the Augusta Chronicle reported in a caption beneath the photo of Mark Owens (above), who leads the church's "Laces 4 Love" project: "Before the Passover, Jesus washed the disciples' feet. In two weeks, nearly 300 volunteers will follow his example and kneel before school children to wash their feet."

Other photos (shown below on this pages) published by the Chronicle also refer to and show foot-washing.

Even as the Augusta Chronicle reported on Americans United's protest of the program, it blandly noted in a photo caption that "church members wash the children's feet, as Jesus did for his disciples."

The paper's "Up to Speed" column for December 18th reported:

The Laces 4 Love shoe drive in Aiken and Edgefield county schools sparked an uproar by Americans United, a group dedicated to the separation of church and state. The Laces 4 Love drive is sponsored by First Baptist Church of North Augusta, and the philanthropy includes a ritual foot washing for the recipients of the shoes. Americans United claims this is a violation of the separation of church and state and should not be allowed. The school systems said no proselytizing has occurred.

The nature of the foot-washing, however, is unclear. A member of the Jewish community who asked not to be identified said church members had assured her there was no ritual connected to the washing; volunteers simply cleaned the children's feet before trying on the new shoes.

A video the group made of its distribution last year — when it was called Operation Mercy — shows a moment of foot-washing three minutes into the clip. But the video appears to be cut to focus on happy kids and copious supplies of shoes.

The First Baptist Church said that Owens was on vacation and not available for comment.

Schools identify needy children to church group
The school districts hosting Laces 4 Love giveaways denied reports that they were giving the group lists of children who qualified for free or reduced-price lunches. 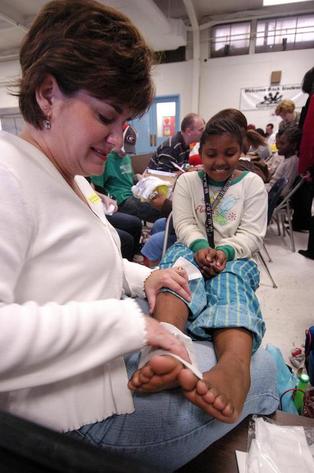 School officials in one school district declined a request by JewsOnFirst to state the policy for giving lists of students to outside groups.

But a knowledgeable source in that district, speaking off the record, said that officials at local schools identify needy students so the church can contact their families for authorization. "A letter then goes to the parent, asking their consent," he said, adding: "The school doesn't sponsor or organize it -- only facilitiates it as a way to help children."

A synagogue in Augusta, Georgia, across the river from North Augusta, in the past carried out a shoe distribution for needy school children, according to the Jewish community member. But, she said, the synagogue simply obtained a list from the school identifying shoe sizes, ages and gender. The synagogue then assembled and delivered the shoes according to the list.

Augusta's small Jewish community
The Jewish community, which is largely centered in Augusta, Georgia, is small. According to Marc Gottlieb, chairman of the Jewish Community Relations Council in Augusta, there are only 1,700 Jews in Augusta and southern South Carolina. The community's small size, Gottlieb said, "makes people not want to rock the boat" or make public issues of events like the foot-washing.

Gottlieb told JewsOnFirst that "there's a continual fight about separation of church and state" in the area and the shoe charity is just the latest instance "where people try to impose their beliefs on everybody else." There is a recorded conversation with Marc Gottlieb, please click here.

The Jewish community member who spoke of the synagogue's shoe distribution said that three large churches dominate North Augusta and everyone in town is assumed to be Christian.

JewsOnFirst has learned that there is currently a nativity scene in front of the school administration building in Augusta, Georgia; it has been there in past years as well.

Gottlieb said he expects the shoe giveaway and the annual "See You at the Pole" pray-in on school grounds to continue. Nonetheless, he said, he believes it is important to remind the Christian majority "that there are other people in the community."