The Soulforce Equality Ride "puts a face" on the adversary

At the half-way point of the 51-day Soul Force Equality Ride, between the tenth and eleventh scheduled visists to Christian and military universities, equality rider Diane Gray pronounces the experience "incredibly rewarding" — 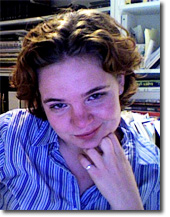 especially the one-on-one encounters at colleges that discriminate against LGBT students.

The Soulforce webiste describes the ride as "a journey to change the heart and mind of America on the issue of lesbian, gay, bisexual and transgender (LGBT) equality. Following in the footsteps of the Freedom Rides of the 1960’s, the Equality Ride uses principles of non-violence to confront military and religious colleges and universities with policies banning enrollment of LGBT students."

In a telephone interview with JewsOnFirst, Diane Gray, 22, said the one-on-one dialogs they seek at the schools, allow the equality riders to "put a face on [their] adversary."

She acknowledged that it's not always easy to dialog with people from organizations that want to outlaw and punish LGBT people. "It's a challenge in some ways," she said, adding that "it's hard when they call riders pedophiles and sick. I have been angry and upset."

Gray explained that the "philosphy of the Equality Ride is that the adversary is a victim of misinformation." Riders make a point of "listening to everything they have to say," not interrupting to argue.

Nevertheless, she said, "It's very difficult. It's even more hurtful when they say 'you're a fine person, but I think what you're doing is sinful' or 'you should reallly be fixed. You can't have a relationship with God.'"

"That, said Gray, is "spiritual rejection" and it's "especially hurtful." A number of people on the Equality Ride are pursuing the ministry," she added, and their response to this kind of challenge is: "''I am gay and I am hoping to be ordained.' We stand in our truth firmly."

Gray noted that about two-thirds of the riders identify as Christians. Both of her parents are Episcopalian priests; of herself, she said, "I have a strong basis in faith."

A graduate of Georgetown University in Washington, DC, where she was able to live openly as a lesbian, Gray said she had still wished there was an LGBT civil rights movement, sweeping up grassroots activists like the one in the 1960s for racial equality. So when she saw advertisement on Craig's List seeking participants in the Equality Ride, it strongly appealed to her.

After riding coast-to-coast in close quarters, Gray remains enthusiastic about "sharing two months" with "30 amazing people, all activists and leaders."

She has no doubt that they are having an impact on the campuses they've visited. At every school LGBT students approach them. The equality riders "share stories" with the students, who don't have many opportunities to discuss homosexuality. For some of the students, Gray said, "it may be their first time talking to someone outside their family or group."

They get emails from all the campuses they've visited. One student, she said, wrote "you gave me a lot to think about."

"I know we are touching people," Gray said. "We may never know all the lives we reach."

As to the political impact of their encounters, the equality riders hope that when some of their interlocutors go to vote, they will remember that they spoke with a gay or a lesbian, and that will put a face on the issue for them.

She also noted that a straight ally at Lee University in Tennessee who talked with them was removed from the choir. That student is withdrawing from the university at the end of the year because she doesn't want to go to a school that discriminates, Gray said.

Some campuses have been welcoming, some have not. At Biola University, in southern California, visited the day of our interview, the Equality Ride was able to meet with students. Gray anticipated that Azusa Pacific University would be "one of the most welcoming" on the tour. Some campuses, she said, "have literally been preparing for months."

Where they can , they give a presentation about the history of violence against LGBT people and "how to be an ally, how to take a stand." Wherever they go, said Gray, "We try to leave literature."

Even on campuses which have not permitted presentations, "dialog happens," she said.

At Texas A&M, a public institution, there was nothing to prevent them from being on campus. So they engaged students on the "Don't Ask-Don't Tell" policy of the ROTC.

At Lee University and Oklahoma Baptist, she said, they were allowed on campus but barred from handing out literature or talking to groups of more than four students.

Dialog even happened at Pat Robertson's Regent University in Virginia Beach, where, said Gray, they received an "anti-welcome" that included police officers on horseback, and where she was arrested.

"The first day, we held a vigil on public property. Students were on the other side of the line, but the police held them back."

The Equality Riders got a dialog going by holding up a big piece of paper with a cell phone number on it. The Regent students called the number; later 30 of them came out and had dinner with the riders.

The next night, said Gray, the riders tried to cross the line. She was one of six arrested in the effort. They have a trial date in Virginia Beach later this month and will try to get a continuance..

Fifteen riders were arrested attempting to dialog at Jerry Falwell's Liberty University in Lynchberg, Virginia, and nine at Oral Roberts University, in Tulsa. (The ride's website, www.EqualityRide.com, notes that " Oral Robert's own grandson was told he could not return to the campus after he came out as gay.")

"When I approached the police line, and even when I had the handcuffs on, I was seeking a dialog of faith and transformation."