Picketers were out in the early-morning chill June 10th, holding signs about love and inclusion in view of the cars entering Immanuel's Church in Silver Spring, Maryland for a conference called "Love Won Out" on "preventing" and "treating" homosexuality. At least one teenage passenger seemed interested in reading them.

The silent vigil was organized by civil rights and religious organizations as an expression of concern about the "conversion" or "reparative therapies" promoted by the conference -- and the underlying concept that homosexuality needs to be "cured."

The conference sponsor, the Colorado based religious right powerhouse Focus on the Family, stages these conferences in cities across the country.

All respectable mainstream medical and mental health organizations regard sexual orientation as an inborn trait, not a choice, and have warned that the religious right "therapies" may cause serious psychological harm to young people. A statement distributed by the vigil organizers said:

We know from other similar events around the country that these conferences can be demonizing and also propagate the view that LGBT people must choose between their Christian faith and their own God given sexuality. Furthermore, some individuals may be present at the conference due to coercion. 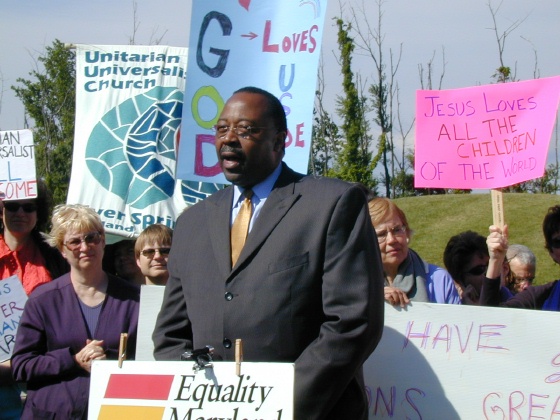 "I'm concerned about the children in the workshop today," said Delegate Gareth Murray (pictured at left) at a news conference following the vigil. Murray, who represents the area in the Maryland legislature's House of Delegates, is, by profession, both a mental health professional and a Baptist pastor. "There's too much misinformation out there," he said.

"Way back in time [homosexuality] was listed as a medical problem," Murray said. Similarly, years ago the University of Maryland required a photo in order to assign a dorm roommate. "We've come a long way," he said. He termed today's efforts for equality "a human rights issue for both the straight and gay communities."

Other speakers emphasized the harm done by "reparative therapy" and the anti-gay agenda it supports. "The agenda of those inside is aimed at denying protections to LGBT people and their families," said Dan Furmansky, executive director of Equality Maryland, an LGBT advocacy organization.

Allen Keiswetter, President of the Metro DC Parents and Friends of Lesbians and Gays said parents' failure to accept their children can make the children depressed and suicidal.

On the website Focus on the Family has set up for the conference the organization states:

Focus on the Family is promoting the truth that homosexuality is preventable and treatable — a message routinely silenced today. We want people to know that individuals don't have to be gay. That's why we've developed a one-day conference for those looking for answers on this often-divisive issue. Whether you are an educator, parent, concerned citizen or even a gay activist, Love Won Out will inform, inspire and offer you hope.

Another speaker, school teacher Robert Rigby, Jr., told of the years he subjected himself to "conversion" therapy, suffering humiliation and physical symptoms--which stopped when he accepted himself as gay.

Rigby told JewsOnFirst that most of the attendees at the therapy conferences he participated in were parents looking for a way to change their children. Conference speakers would tell parents how to deal with "their effeminate sons," he said, advising them to "take their Barbie dolls away" and give them toy trucks.

The Washington Times said 700 people attended the conference, which had a $60 entrance fee. An attendee taking a smoke break said there were "a few hundred" people inside.

Picketers present in the first hour of the vigil said they saw teenagers arriving in groups and teenagers brought by their parents, as well as single adults. One teenage boy craned his neck, trying to read the vigil's signs, while his mother stared straight ahead, a picketer recounted.