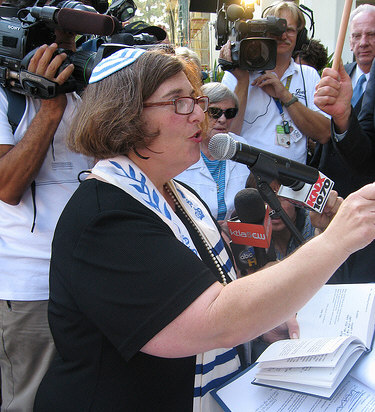 Rabbi Denise L. Eger serves Congregation Kol-Ami in Los Angeles. She holds a Masters Degree from Hebrew Union College - Jewish Institute of Religion. She has published extensively on human sexuality, interfaith dialogue and human rights and has appeared on television and radio as an expert in these areas. In her conversation with JewsOnFirst.org, she said:

The passage of this very draconian measure took away the civil rights from Californians citizens and had a huge impact and eats away at the dignity of married couples in our synagogue and across our state. There is so much hurt in the lives of the couples that have been married…the most painful of situations of the the kids in our Sunday School. Those children participated in the marriages…like my own child the best man. Children came up and me asked, " is my family still a family?" They feel their family is under attack and the status of their family is going to be stripped away.

It is just outrageous that religious bodies that uphold family as a value led such an anti-family measure.

Rabbi Eger also announced two rallies, February 13 in Los Angeles and February 16 in Sacramento. These rallies are part of an on-going effort to build greater awareness about human rights and the human costs of Proposition 8.