The email appeal we received this weekend from Chaz Franzke and Jim Thideman was astonishing. They were appealing for funds to hire expert witnesses for a lawsuit to stop a shameful seven-year vendetta against them organized by some of the citizens and churches of Ava, Missouri.

Neighbors of Franzke's and Thideman's Cactus Canyon campground, which caters to gay men, had put hogs on adjacent property with the intent of harming their business, their email said. And when Franzke and Thideman sued to stop the destruction, the legal arm of the American Family Association, a major religious right group, stepped in with free legal assistance for their tormentors.

We contacted Franzke and he provided us with details and documents showing their experiences to be much worse than the terse email, with which we begin their story. Our interview follows, after which are a Cactus Canyon news release, links to news reports and the lawsuit filed by Franzke and Thideman.

Email to JewsOnFirst.org from Chaz Franzke and Jim Thideman, July 15, 2006

Here is our story in a nut shell. We own a gay campground in SW Missouri. Over the last 7 years we have fought off issues with neighbors harassing us to businesses and the local sheriffs' department and prosecutor's office being derelict of duties. Now this spring a group of "self proclaimed Christians" incorporated a hog farming business and leased land adjacent to our property and directly uphill from our Hot tub / sauna.

We opened on Mar 1 as usual and on Mar 2nd hogs were delivered to the neighbors property. The purpose of the hog farmers was to disrupt and ruin our business. We got legal representation and sued the parties.

The hog farmers were able to get the American Family Association to represent them for free. 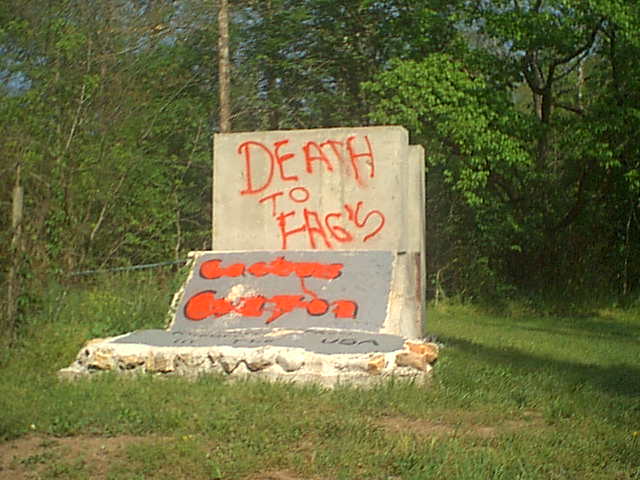 We have a wealth of information on who is involved and witnesses to testify. Our lawyer wants us to hire expert witnesses, and it is their testimony that will win the case for us. The expert testimonies are going to cost us between $25,000 and $40,000. As small business owners we have limited resources to fight a long protracted legal battle.

We have had some success at fundraising. But it seems that all the gay foundations only grant money to 501 (c3) groups. I am writing this out of frustration but also to ask your help in raising awareness of gay issues in rural Missouri.

Feel free to pass this email to anyone and everyone who may be able/interested in helping.

After we received the email appeal from Cactus Canyon Campground, we phoned Chaz Franzke, who told us that neighbors have harassed them since 1999, when they established the business. In addition to the hog farm mentioned in the email, they have endured numerous shooting and rock-throwing incidents. Additionally, some of the citizens and churches of Ava, Missouri, have carried out an ongoing hate campaign against Franzke and co-owner Jim Thideman.

Franzke and Thideman believe that the hog operation was planned deliberately to drive them out of business. Their lawsuit says that their neighbors, the Wattersons, and Dan Fish deliberately bulldozed and graded leased property adjacent to their land "in order to cause maximum damage" to the campground. They incorporated the hog farm as Douglas County Hog Producers. Dan Fish is president of the company and Shannon Watterson is vice president.

Franzke told us that the people involved in the hog operation all had land elsewhere that they might have used for raising hogs.

Instead, the would-be hog farmers leased the adjacent land. Its owner had tormented Franzke and Thideman since they moved onto the property, Franzke said.

The lawsuit says the hogs might have been brought onto the hillside area "to add hog waste and additional erosion and resulting sediment and turbidity to the discharge funneled" onto their property. 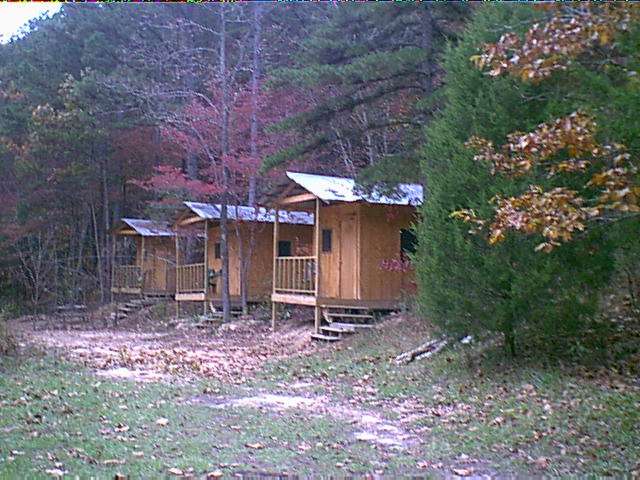 Franzke said that some townspeople raised money to bring in the hogs. "They went to all the churches in Ava."

The pigs were delivered this spring, the day after Franzke and Thideman opened for the season. They were removed several weeks later -- because of the lawsuit, Franzke said. He added that "major damage" from the bulldozing continues to affect the campground.

The suit, filed in state court, seeks hundreds of thousands of dollars in damages, including punitive damages, for the problems caused by the hog farm.

American Family Association provides attorney
Stephen M. Crampton of the American Family Association Center for Law and Policy is representing Dan Fish, Shannon Watterson, the incorporators of the hog business, and Watterson's wife Trish. The Tupelo-based organization, headed by Donald Wildmon and known for its extreme homophobia, is working for free, according to Franzke and Thideman.

The lawsuit also seeks to recover damages for years of shooting, rock throwing and vandalism, including arson and defacing of signs.

One individual, said Franzke, has fired "hundreds of rounds" onto their property. He told of an incident last March when the shooter was under a restraining order to leave the campground alone, but nonetheless shot in round after round.

Franzke summoned the sheriff. "The officer told me he was not going to go talk to him," he recounted. "He said it would make him mad."

Until the lawsuit quieted things down, Franzke said, he was sleeping in his tennis shoes, a loaded gun nearby.

People in Ava -- population 3,025 and Douglas County's only incorporated town -- "convened city-wide meetings" and "tried to get people riled up" against them, Franzke said. He added that an elected state representative has been implicated in the conspiracy.

Churches in Ava chip in
Many -- but not all -- the churches in the area chipped in for and signed full-page newspaper advertisements with biblical quotations and statements condemning homosexuality.

Franzke said that townspeople also circulated petitions characterizing the campground owners and their clients as "pedophiles who are after your children."

He said that there are some people in Ava who have not joined the meanness. Some appreciate the fact that the men who camp at Cactus Canyon spend cash at local businesses.

On a brighter note, Franzke said, the harassment has not frightened off their guests. "They are putting up with it," he said.

News release and appeal by Chaz Franzke and Jim Thideman, owners of Cactus Canyon Campground, May 2006

Members of the civil conspiracy are working together for the purpose of harassing, intimidating and disrupting the business of Cactus Canyon Campground and the rights of the owners to peacefully enjoy their property. The conspirators placed a hog operation on the boarder of the property and engineered the farm run-off to pollute and contaminate springs and streams within Cactus Canyon Campground itself. The hogs had been removed after spending 23 days on the property. However the engineering of the operation continues to impact on the campground.

Cactus Canyon Campground, a long-established men's campground in southern Missouri for the past seven years, provides gay, bi and straight men a unique recreational opportunity in the Ozarks. Campers traditionally return year after year. The blatant and maliciousness of the conspiracy has divided the otherwise tolerant and peaceful community of Ava.

Immediate Assistance
We are currently looking for continued financial assistance for Legal Representation. We also seek attorneys that will lend a hand and that are willing to assist in "tilting windmills" in making new laws and maintaining those that we currently have on the books. THE REASON - The Defendants have now acquired the legal services of American Family Association, Center for Law and Policy. The Center for Law and Policy was established in 1990 and is the legal arm of the American Family Association, Inc. The Center responds to the request of "Christians" for legal representation involving first amendment free speech and free exercise rights as well as the constitutional issues involved in the continuing battle against pornography and obscenity. The services are being provided free to the defendants.

We urgently request the support of the GLBT community and its allies to band together to help Cactus Canyon Campground help fight hate crime and bigotry. They affect not only us in Missouri but across the nation. We here are appealing for financial help to offset the cost of litigation and improve security. The legal battles continue and additional information is continually being gathered. Any and all donations are greatly appreciated. Please further spread this release and request for support to any and all that of might be of interest. If you are able to put together any assistance we would greatly appreciate it.

Please to read the petition, a PDF document.