Rev. Rod Parsley, pastor of the World Harvest megachurch in Columbus, Ohio, credited with turning out the vote for President George W. Bush in 2004, has not yet had media attention as a problem endorser of Sen. John McCain. But he should. Like McCain endorser Pastor John Hagee, who is increasingly reported as an embarrassment for the Republican presidential contender, Parsley has made bigoted statements about Islam, calling it a "false religion". And recordings of two of Parsley's church services obtained by JewsOnFirst.org, reveal him to be a warmonger and a militant theocrat.

"I'm urging you to fight," Parsley preached on May 4th. He declared that the United States is in a two-front war against "rabid Islamo-fascism" and secularism at home. He disparaged tolerance.

Parsley endorsed Sen. McCain in February, in advance of the Ohio Republican primary. McCain called Parsley a "spiritual guide" and Parsley campaigned with him in Cincinnati. 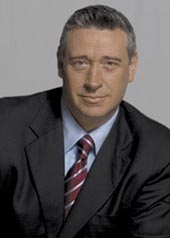 On the home front, he described a no less cataclysmic struggle. "The long anticipated collision between secularism and biblical Christianity is well underway." Parsley demanded of the congregation present and viewing him on television at home, whether "we" would "sit quietly by . . and watch as our nation follows Europe’s slide into the deep dark night of post-modern, post-Christian paganism?"

Parsley turned to the morning's guest, Lt. Col. Oliver North, an Iran-Contra conspirator in the Reagan administration. North, who now hosts a military-themed series on FOX television, was pushing his new book, American Heroes in the Fight Against Radical Islam.

North echoed Parsley's theme, referring to the "clash of culture and civilization that we’re seeing." 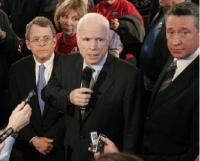 He said, "For the very first time in history, Muslim women ... are being protected by Christian men and women wearing the uniform of the United States."

North: troops "bold" about faith
North spent the bulk of his presentation talking about his experiences embedded with US troops in Iraq, repeatedly praising the fundamentalist Christian religiosity of the men and women in uniform. "The youngsters I cover know the power of prayer," North said. "They are bold about their faith." 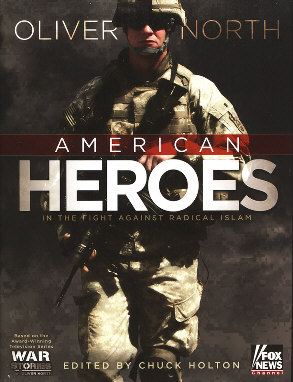 In one reference to photos in his book, North said: "The pictures of these youngsters gathering in prayer, literally kneeling and praying -- they are not pictures of getting ready for a football game. They know they may not come back and they’re bold about it. My colleagues in the mainstream media never show that," he said.

"When you’re out there in the field with them and you live with them for weeks on end, you’re seeing these remarkable professions of faith," said North. "That it be confessed from their lips that He is Lord."

The October 2007 recording
Anti-secular and anti-Islam themes are also to be heard in the October 30, 2007 service of which JewsOnFirst.org obtained a recording. After ten minutes of announcements promoting the church's voter registration program and Parsley's organizations, the Center for Moral Clarity and Reformation Ohio, Parsley begins to speak.

He deplores what he says are the declining numbers of believers in "biblical Christianity," which, he says is at war with secular humanism. "We are at war for our civilization," Parsley states. "It is not a war of force and violence... You have to be careful if you have a newspaper reporter show up and you have the children come out and sign Onward Christian Soldiers."

"We won't be fully Christian till we take back our culture," declared Parsley, before proceeding to introduce Gary Bauer.

Bauer also spoke about a battle of Christian and Muslim cultures. At one point he opined that Muslim mothers "celebrate" the death of their young.

The third speaker, former Senator Rick Santorum continued the battle motif in his speech. "We are at war with radical Islam," Santorum said.

But he provided a slight variation on that mantra, saying that the war against "radical Islam" is interrelated with the domestic culture war. "The two battles are interrelated," he said. "The battles against the terrorists are connected to fighting the cultural battle here." And, Santorum argued, "we can only win if we are a people of faith."

He pointed to Europe, which he called "a world without faith. Europe has nothing to pass on," he said.

Calling for genocide?
The eminent religion scholar Martin Marty questioned in a recent blog post whether Parsley's call for the "destruction" of Islam is a call for genocide.

Islam has no central authority. It is a family religion, a village religion, with millions of bases for a billion believers. Islam is not an institution or a dogma. When one calls for the destruction of Islam one has to mean the killing of all Muslims. Rather than accuse Parsley of calling for genocide, it is in place to ask him to spell out alternatives. Does "destroy" Islam mean winning a debate until every last targeted Muslim cries uncle and says, "I give up, you win"? He may mean that. Does the "destruction of Islam" mean the deconversion of a billion people and, preferably, conversion to Parsley's "Christian civilization"? Try converting as many as one in your town, and then take on the millions more in Indonesia. Does "destroy" mean bombing the 1,209 mosques in America, which number includes only a few of the world-wide total? As of now, Parsley simply calls for "war." By most definitions, doesn't "war" mean "killing"?

In 2004 the Democrats never noticed that the Bush re-election campaign was going on in churches like Parsley's. In the 2008 campaign, as the recordings of the two World Harvest Church services demonstrate, Parsley and his kindred theocrats are popularizing anti-Muslim sentiments. This is unlikely to boost flagging public support for the war in Iraq. But it is easy to see how Parsley and his allies are making bigotry permissible for their supporters -- and making those supporters susceptible to the incessant hoax emails that claim Barack Obama is a Muslim.

Following, in three parts, is a recorded service at the church last October that included Rev. Parsley, former Reagan administration aide Gary Bauer, and Rick Santorum, the Republican senator from Pennsylvania who was turned out of office in 2006.