A video game that arms young people to kill those who resist conversion to fundamentalist Christianity hits the market just in time for Christmas gift-giving. Was this bad judgment or was it deliberate?

The creator of the game, Left Behind: Eternal Forces, makes clear that it was entirely intentional -- a smart business move to ride the $500 million surge of profit for Mel Gibson's The Passion of the Christ with a new genre, "God Games." Left Behind Games, a publicly traded company, also anticipates a ready market among the millions who bought 63 million Left Behind novels; the game company holds the license to create games based on the books.

In contrast to the meetings, previews, media debates and warnings that preceded Mel Gibson's film, Left Behind: Eternal Forces has rolled out discreetly, apparently avoiding Jewish scrutiny. A coalition of progressive Christian groups held a news conference last week to warn of the game's perniciousness and call for its withdrawal from the market.

Left Behind: Eternal Forces is set in Manhattan; the enemy is the Global Community Peacekeepers led by the Anti-Christ. The good guys are the Tribulation Force, left behind when their fellow Christians are beamed up in a "Rapture" popularized by the Left Behind book series. To win, the Tribulation side must convert "non-believers" -- Jews, Muslims, and, arguably, many Christians. Their weapons are prayer and assorted armaments including humvees and tanks.

Organizations seek game's recall
The groups protesting the game object to its advocacy of violence against "infidels" and to the "End Times" theology of the Left Behind products.

CrossWalk America, a Christian activist organization in Phoenix which hosted last week's news conference, is circulating a petition seeking the game's recall because it "involves teenagers in killing non-Christians and Christians who do not convert to ...the particular form of Christianity" that permeates Left Behind: Eternal Forces.

"Imagine if at Christmas time Muslims had launched a video game based on converting or killing all Christians," said the Rev. Timothy Simpson, president of the Jacksonville-based Christian Alliance for Progress, in a telephone interview with JewsOnFirst. 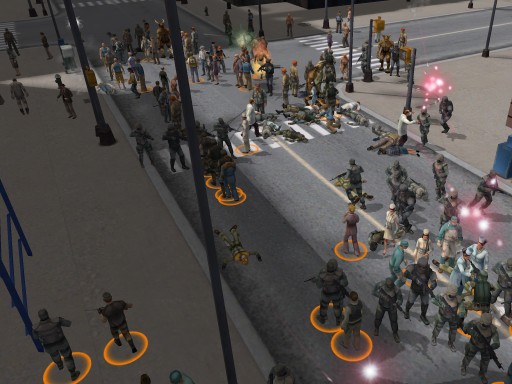 Dr. Bruce Prescott, executive director of Mainstream Oklahoma Baptists, noted in an interview that if the game had been set in Jerusalem, the usual setting for End Times dramas, "the outcry would have been deafening."

A review on Focus on the Family's "Plugged-in" website says that Left Behind Games is "pushing" the game as an evangelism tool for teens. The review also terms Eternal Forces "the kind of game that Mom and Dad can actually play with Junior—and use to raise some interesting questions along the way."

Game's "faith-based" killing a concern
Critics raise several concerns about the use of violence in Eternal Forces.

"There's no gore," said Simpson of the Christian Alliance for Progress, who said he has played the game. "But there is killing. It's 'faith-based killing.'"

The game emphasizes that when you kill someone your "spirit score" drops and you must pray, he said. But "once you get to higher levels [of the game] there are military training centers, tanks and humvees."

CrossWalk America Co-President Rebecca Glenn expressed concern about the game's message to teens. Players pray for their adversaries "and try to do good spiritual things for them," she said in an interview. But, she continued, at a certain point, "it becomes acceptable to kill them. The implication is that the killing is justified because the player is making eternal decisions."

"It is really scary when one religion says it has all the answers," Glenn concluded.

Prescott of Mainstream Oklahoma Baptists, said Eternal Forces "is teaching people to consider non-Christians as an enemy target rather than having a dialogue and sharing faith." For him, that makes the game "a perversion, offensive to me in terms of my faith."

Asked how a typical Christian parent might react to a child's use of the game, Prescott replied: "What Christian parent would want their child to hear 'Praise the Lord' every time you blow someone away?"

Company: "Physical warfare results"
In a rebuttal to depictions of the game as violent, the company acknowledges its violent content. According to the Left Behind Games website:

In Left Behind: Eternal Forces, the players' objective is to find ‘tribulation clues', which include Bible mysteries, codes and fascinating and eternally relevant information. In the initial missions, there is little emphasis on physical warfare and gamers are introduced to powers of influence which result in a battle for the hearts and minds of people. As missions progress, there are no ‘objectives' to cause war physically. However, physical warfare results when the player is required to defend against the physical forces of evil; led by the Global Community Peacekeepers.

The company actually promises violence in a posting enticing gamers:

Focus on the Family, a leading religious right organization, shrugs off the violence. In its review on its "Plugged In" website (that includes an interview with Left Behind co-author Tim LaHaye), Focus on the Family says:

Yes, you're offered sniper rifles, gun turrets, even tanks and helicopters. And there are points at which a gun battle is necessary to avoid a massacre. (When this happens, there's no gore. Units fall to the ground and fade away.) But if you go in guns blazing, nine times out of 10 you fail. It quickly becomes clear that the strongest weapons in your arsenal are your top-level missionaries and worship leaders. It's easier to convert a group of enemies than it is to shoot them.

Still, post-Rapture warfare is integral to the game, as it is in the Left Behind books and movies. And it's worth noting that fighting back is nowhere described in Scripture. Will Christians really be called to militarize, then? Dr. Tim LaHaye, co-author of the best-selling book series on which the game is based, told Plugged In Online that this fictionalized depiction in the books, movies and now video games is a representation "of the self preservation instinct of the much-persecuted saints during the Tribulation."

End-Times theology a concern
The Rapture, purportedly based on the New Testament book of Revelation, is a central fixture of Left Behind books and the Eternal Forces game. According to Simpson of the Christian Alliance for Progress, its popularization "is having a negative effect on Christian theology and foreign policy." 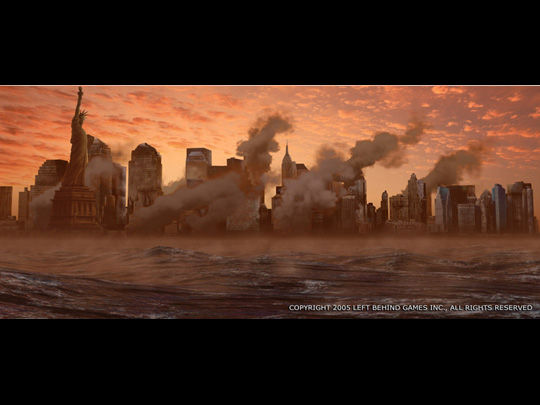 Within the Christian Church, Simpson said, it was accepted theology for Revelation to be read symbolically rather than prophetically. It was written as a two-hour "readers' theater," allegory of good and evil, he said, intended to boost the spirits of 2nd century Christians in Asia Minor, suffering Roman oppression.

Apocalyptic literature has always appealed to people at the margins, Simpson said. "There's a danger, though, when empires pick it up."

He expressed concern that end-timers "want to ratchet up U.S. policy in the Middle East" because "they see all conflict as leading us to the return of Jesus."

In the End Times scenario, the defeat of the Antichrist presages the return of Jesus.

New York not found in Bible
Prescott of the Mainstream Baptists pointed out that New York is an unusual setting for the battle against the Anti-Christ. "New York is not the setting for anything in the Bible," Prescott said in a telephone interview. Everything is based in Megiddo, in Israel.

"Now, he continued, "the scenario is not in the Middle East, it's New York City. Why are we training teens to do battle in New York?"

New York is the location of United Nations headquarters. The Left Behind series' Antichrist is a Romanian dictator who leads a United Nations force of global peace-keepers. This is the enemy in the game, which also warns players against activists, rock musicians and non-Christian medical professionals.

The demonization of the UN reminds that Tim LaHaye, co-author of the Left Behind books, was, according to several scholars (cited by Michelle Goldberg in her recent book, Kingdom Coming) associated with the John Birch Society, a far-right fringe group that flourished during the 1950s and 60s, whose extreme anti-Communism was widely regarded as having anti-Semitic undertones.

In the 1980s and 90s the UN and its purported world government became the purview of the interrelated militia and Christian Identity (white supremacist) movements.

Company was struggling
According to SEC filings, the Left Behind Games company used to call itself Bonanza Gold. It has yet to reap that bonanza.

We have not generated any revenue and has incurred net losses of $9,547,153 and had negative cash flows from operations of $1,771,790 since its inception through March 31, 2006. Our ability to continue as a going concern is dependent upon its ability to generate profitable operations in the future and/or to obtain the necessary financing to meet its obligations and repay its liabilities arising from normal business operations when they come due. Management plans to continue to provide for its capital requirements by issuing additional equity securities and is currently in the process of soliciting additional capital. No assurance can be given that additional capital will be available when required or on terms acceptable to us. The outcome of these matters cannot be predicted at this time and there are no assurances that if achieved, we will have sufficient funds to execute its business plan or generate positive operating results.

It is unclear what the Left Behind Games has spent or realized since last March. In a November 27th news release, the company said that games have been shipped to 10,000 retailers, and it has "attained multi-million dollar receivables." Retailers include Christian shops and mainstream outlets like BestBuy, according to the news release.