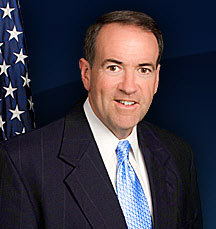 With the Iowa caucuses less than a month away, Mike Huckabee, an avowed biblical literalist with a television ad (below, right) identifying himself as a "Christian leader," is surging ahead in the polls. He is getting a national bounce from the surge. Meanwhile, Mitt Romney, who has poured millions of dollars into his Iowa campaign only to be overtaken by the cash-starved Huckabee, gave a speech on religion aimed in part at ingratiating himself with right-wing evangelical Christians.

The big story a couple of months ago was how the leaders of the Christian right could not agree on a candidate. The movement's leaders are still divided, with Pat Robertson backing Rudy Giuliani while Paul Weyrich and Bob Jones III back Romney. But in Iowa, the religious right rank and file is increasingly polling for Huckabee, a Baptist pastor as well as a past governor of Arkansas. He has taken the lead in state polls and is rising in national polls as well.

Pastors organize for Huckabee
Last week Huckabee's campaign in Iowa announced the formation of the Huckabee Pastors Coalition in that state; several dozen pastors have signed on to the effort. Also last week, Chuck Hurley, leader of the Iowa affiliate of Focus on the Family, endorsed Huckabee.

Nationally, Huckabee's list of religious right endorsers is lengthening. Among the big names backing him are Donald Wildmon, leader of the American Family Association, Tim LaHaye, author of the Left Behind books and his wife Beverly LaHaye, founder of Concerned Women for America, Rev. Jerry Falwell Jr., Rick Scarborough of Vision America Action, and actor Chuck Norris. Huckabee has also been endorsed by Phil Burress, a major leader of the Christian right in Ohio.

Secular Republicans might not like evangelicals' choice
The irony is that the national Republican establishment -- which caters to big business and the wealthy -- might be nervous about this voter convergence on Huckabee. Conservative columnist Robert Novak wrote last month that the party was happy to have the Christian right as a reliable voting bloc but never expected it to coalesce behind one of its own.

Huckabee is campaigning as a conservative, but serious Republicans know that he is a high-tax, protectionist advocate of big government and a strong hand in the Oval Office directing the lives of Americans. Until now, they did not bother to expose the former governor of Arkansas as a false conservative because he seemed an underfunded, unknown nuisance candidate. Now that he has pulled even with Mitt Romney for the Iowa caucuses and might make more progress, the beleaguered Republican Party has a frightening problem.

The rise of evangelical Christians as the force that blasted the GOP out of minority status during the past generation always contained an inherent danger: What if these new Republican acolytes supported not merely a conventional conservative but one of their own? That has happened with Huckabee, a former Baptist minister educated at Ouachita Baptist University and Southwestern Baptist Theological Seminary.

Huckabee and backers shrug off Wall Street Republicans
A spokeswoman for some those "serious Republicans," the anti-tax Club for Growth, was quoted by the New York Times calling Huckabee "‘a serial tax hiker and a big-government big spender." According to the Times, Huckabee calls the group "The Club for Greed."

Some correctly point out that Huckabee hasn't raised enough money to conduct a national campaign and therefore suggest he is "unelectable." That appears to be changing, but while the money issue is important, it should not be the most important consideration for people of faith. We should not overlook the fact that he, a Republican, was elected thrice in a predominately Democrat state where he received over 45 percent of the black vote.

Many are praying that God will spare our great nation from the judgment we certainly deserve for the killing of over 45,000,000 pre-born children, not to mention the millstone we deserve to have hung around our necks for allowing our living children to be exploited by the sexual anarchists that now control public education and Hollywood. We need revival for survival.

I suggest that God may be sending us a lifeline. Who better to lead a nation nearing moral collapse and perhaps World War III than a president who is also a pastor with 10 years of senior executive experience as a governor? Many in the secular press are now reporting that he is a legitimate first-tier candidate whose star is rising while others are fading. Millions of voters are gravitating to him.

While Huckabee might be an economic populist, there is nothing to suggest that he deviates from Christian right positions in such areas as opposing a woman's right to choose, favoring the teaching of creationism and opposing LGBT rights. This week he prompted outrage when he defended his 1992 statement that people with HIV/AIDS should be isolated.

Romney says church-state separation has gone too far
In an effort to "sell" himself to Christian right voters, especially in Iowa, Mitt Romney gave a speech on religion on December 6th. In the speech he downplayed specific tenets of his Mormon faith and assured conservative evangelicals that he supported their goals of infusing government with religion. 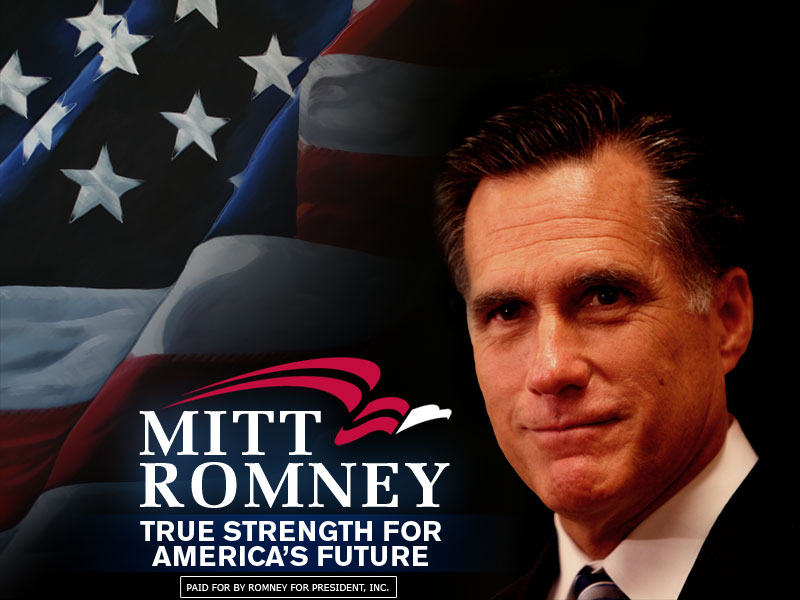 We separate church and state affairs in this country, and for good reason. No religion should dictate to the state nor should the state interfere with the free practice of religion. But in recent years, the notion of the separation of church and state has been taken by some well beyond its original meaning. They seek to remove from the public domain any acknowledgment of God. Religion is seen as merely a private affair with no place in public life. It is as if they are intent on establishing a new religion in America - the religion of secularism. They are wrong.

The founders proscribed the establishment of a state religion, but they did not countenance the elimination of religion from the public square. We are a nation 'Under God' and in God, we do indeed trust.

We should acknowledge the Creator as did the Founders - in ceremony and word. He should remain on our currency, in our pledge, in the teaching of our history, and during the holiday season, nativity scenes and menorahs should be welcome in our public places. Our greatness would not long endure without judges who respect the foundation of faith upon which our constitution rests. I will take care to separate the affairs of government from any religion, but I will not separate us from 'the God who gave us liberty.'

Romney also got in a dig against "radical Islam" and repeated a prevalent piece of theocratic mischief, saying: "Americans acknowledge that liberty is a gift of God, not an indulgence of government."

It is unclear if Huckabee's bounce will propel him far beyond Iowa, where conservative Christians are expected to make up a sizable bloc of the caucus-goers -- or if he will start to collect the money he'd need for a credible national race. At a recent speech at Jerry Falwell's Liberty University, Huckabee explained his low-budget campaign's success as the result of prayers. "There literally are thousands of people across this country who are praying that a little will become much," he said. "And it has. And it defies all explanation it has confounded the pundits..."