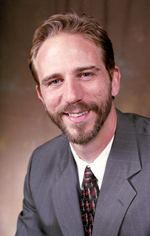 David P. Gushee, PhD, is the Graves Professor of Moral Philosophy and Senior Fellow of the Carl F. H. Henry Center for Christian Leadership at Union University, a Baptist school in Jackson, Tennessee.

This wide-ranging, half-hour recorded conversation moves from Gushee's founding work with Evangelicals for Human Rights and his argument that torture is always wrong, to Jewish-Christian relations, then to Christian Zionism. That discussion proceeds to considering end-times scenarios and Christian environmental activism, in which Gushee is involved. He also mentions the book he is currently writing about an emerging evangelical center -- as contrasted with the Christian right.

The conversation concludes with a brief discussion about what a centrist evangelical position on homosexual relationships would look like. Gushee, who blogs at CounterCulture, says he rejects the hatred and homophobia expressed by religious right organizations.