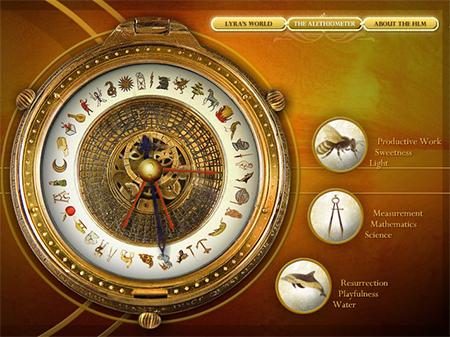 Dr. Albert Mohler, the president of the Southern Baptist Theological Seminary, is a leading intellectual of the religious right and a prolific blogger. In a recent post Mohler criticizes the just-released film The Golden Compass, as a "directly subversive" attack on "biblical" (that is, Mohler's brand of fundamentalist) Christianity.

The film is adapted from Philip Pullman's eponymous book, the first volume of his "Dark Materials" trilogy. Mohler declares the movie, to be "a new challenge for Christians -- especially parents" because it is very well written, cast and produced. These qualities, he says, are likely to make the film a blockbuster and a Christian boycott futile.

Philip Pullman has an agenda -- an agenda about as subtle as an army tank. His agenda is nothing less than to expose what he believes is the tyranny of the Christian faith and the Christian church. His hatred of the biblical storyline is clear. He is an atheist whose most important literary project is intended to offer a moral narrative that will reverse the biblical account of the fall and provide a liberating mythology for a new secular age.

Mohler writes: "The great enemy of humanity in the three books, The Golden Compass, The Subtle Knife, and The Amber Spyglass (together known as His Dark Materials) is the Christian church, identified as the evil Magisterium. The Magisterium, representing church authority, is afraid of human freedom and seeks to repress human sexuality. The Magisterium uses the biblical narrative of the Fall and the doctrine of original sin to repress humanity. It is both violent and vile and it will stop at nothing to protect its own interests and to preserve its power."

Mohler acknowledges that fundamentalist Christianity might have been excessively authoritarian at times, but insists: "The biblical story of the Fall is true, after all, and our only rescue is through the Gospel of Jesus Christ."

In his blog posting, he seems to yearn for a return to the absolute religious authority that Martin Luther refuted. Today, most churches challenge Mohler's fundamentalist and narrow interpretation of original sin and distrust of sexuality. The Christian Fall is no longer just what one group says it is. There is a diversity of opinion.

Jews never read into the Bible a doctrine of original sin. They did not view sexuality with horror and suspicion as fundamentalist Christians do. For Jews, the world is not mired in evil; instead it has the potential for good. Most Christian theologians now support this traditional "Jewish" reading of the Bible.

Mohler writes, "... Pullman's His Dark Materials is intended as an answer to Lewis's Chronicles of Narnia. What Lewis (and J. R. R. Tolkein) did for Christianity, Pullman wants to do for atheism."

While Mohler argues that Pullman's trilogy and The Golden Compass are leading to atheism, I would suggest that Pullman is arguing for a doctrine of "original blessing" rather than original sin. (In a book entitled Original Blessing, former Catholic priest Mathew Fox suggested this does make for a less significant place for Jesus but a greater place for God.)

Mainstream reviews I've seen (there are links to some of them below) regard the Golden Compass as an opportunity to involve children and adults in imagining and rethinking important life truths.

Mohler accepts re-arguing these questions as a way for Christians to rise to the "challenge" of the movie. But he seems to believe that the only answers will be those he already believes. He writes: "Pullman's worldview of unrestricted human autonomy would be nightmarish if ever achieved. His story promises liberation but would enslave human beings to themselves and destroy all transcendent value."