An Interview with punk rocker/preacher Jay Bakker, featured in the Sundance Channel series One Punk Under God

Jack E. Jett hosts The Queer Edge television show with Sandra Bernhard; you can see it here. Last fall, Jett interviewed Mike Jones, the gay man who had sexual trysts with Rev. Ted Haggard. Jones' statements forced the megachurch pastor to resign from his church and the chair of the National Association of Evangelicals.

Editors' note: This interview contains some words regarded as profanities. We have not previously published anything containing these words and hope that readers will let us know if they are offended. 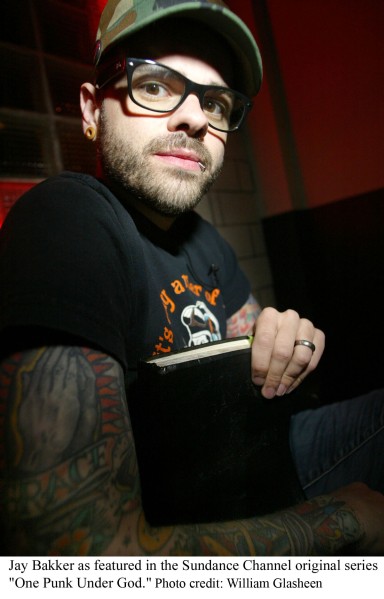 In 1995, God Bless The Go Go’s was released. They sang, “the drag queens have the navy tossing in their bed, Mary ate a little lamb and punk rock is not dead.” As an aged punk rocker, I am so thankful that I have lived long enough to see the fusion of Christianity and punk rock come to fruition... In my opinion, it is long overdue.

Jay Bakker is evangelistic royalty. As the son of Jim and Tammy Faye Bakker, he is the Prince William of TV evangelists. The irony of all this is that the Bakkers' PTL [Praise the Lord] Network was one of the few TV events that punk rockers used to watch, more for its camp value than its message. The proverbial Jesus shit hit the fan when the Bakkers tried to make Christianity a time share project through PTL's resort, Heritage USA.

Then came Jim Bakker's affair with Jessica Hahn, and Tammy’s mascara ran deep and wide. Jim Bakker went to jail, and Jerry Falwell took over the remains of the bankrupted operation. This left little Prince Jay’s life in a state of chaotic flux.

When his Dad went to jail, Jay did what any normal 14 year old guy would do, he got drunk. The problem was that he stayed that way for years to come. Now, a handsome tattooed stud puppet, Jay Bakker has come out as a gay-loving, punk-rocking, Jesus-loving man. Would we expect anything less from the offspring of our cultural icon Tammy Faye? Pastor Jay Bakker has started a revolution with Revolution, a church that welcomes all. Yes, you read that right, a church that WELCOMES all. Who knew that Christianity could be so…so… --loving? Of course, loving the homo comes with a cost in the ultra wealthy mega church world of heterosexuals like Ted Haggard.

Jay Bakker's series is ONE PUNK UNDER GOD and is produced by the same fearless producers that brought us THE EYES OF TAMMY FAYE. It is a sad/happy/sad time for all of us. The church is having some financial issues, the show is fantastic, yet Tammy Faye Messner is very ill. My favorite person on the series is Amanda, Jay’s super right-on and ultra cool wife. She is beautiful, charismatic, and smart as hell. This is the kind of chick I would have gone for had God made me a heterosexual, but he didn’t, and that is cool with Jay Bakker.

Is the world ready for another crazy Bakker? Yes, at least we know he won’t be blaming the gays for Katrina, or 9/11 like some Falwellian. Below is my chat with Preacher Prince Bakker.

First up Mr. Jay…how freaking fun was that slide at Heritage Park and did you get to ride it over and over without having to wait in line?

I never rode the big slide because it was scary. I rode the rapids all the time and my dad made me wait in line.

During the hay day of the PTL, did you ever suspect that some of the church staff might be gay? I remember watching the show and my finely tuned gaydar would go up to eleven.

What are your thoughts on the recent spat of evangelicals being forced out of the closet?

It's unfortunate that it's even an issue.

What sort of “raging alcoholic” were you? Are you a mean drunk, fun drunk and just obnoxious?

Can you feel all the love that is currently going toward your mom, not only from the gay community but from the world?

Yeah, when I do interviews or talk to people they always send their thoughts and prayers to my mom and that really means a lot.

After seeing “The Eyes of Tammy Faye” I realized that Jerry Falwell was even harder-line than I thought he was. What are your thoughts on him and his buddy James Dobson?

It's sad to me that they seem to make God so exclusive - that only the "good" boys and girls get to experience his approval.

How did you feel about all the attention paid at the height of the PTL? You were a little teen star.

I was a chubby, insecure preteen who would rather spend time playing with GI Joe than being on TV.

Was it all taken away suddenly? How was that?

Yes, it was taken away suddenly and it was very scary for an 11 year old to loose his house, the school he went to and all his friends. It took me a long time to recover from that.

Will we be seeing your sister in ONE PUNK UNDER GOD?

Just for a few seconds. But she's a big supporter of me. She's been living with my mom and acting as her primary care giver. She's amazing.

Why are you having such a financial struggle with your church Revolution? I mean there doesn’t seem to be any shortage of money in any organized religion?

We've lost most of our support since I came out as a gay affirming pastor.

Why is it necessary for religion to be organized in the first place?

How did you meet the World of Wonder guys?

They interviewed me for "The Eyes of Tammy Faye"

Do you think, from what you have seen that the show is a fair assessment of your life at this moment? 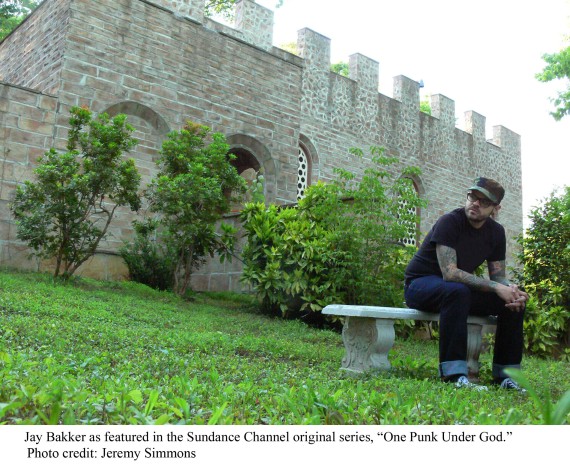 In my mind, I think that all evangelicals do is sit around and figure out ways to harass gays. It is like they think that by diminishing us, they are going to get a better crib in heaven. I wish they would just get the fuck out of our face. What is up with that?

There are probably a lot of Christian Evangelicals who would probably agree with me and are supportive of the gay community. But unfortunately it's the mean ones who yell the loudest.

My hope is that this series will bring light to the fact that one can have an evangelical belief system that is not so homo obsessed. What was it that changed your views on homosexuality, or have you just always been a cool, hip dude?

For most of my life I wasn't sure. But I've had a lot of gay and lesbian friends over the years and my mom was always supportive of the gay community. Having gay friends made me want to look into it deeper and my conclusion is that it's not a sin. But the major catalyst was when I was invited to speak at Open Door Church, a gay affirming church with a gay pastor. My heart went out to these Christians who felt disenfranchised by the church. That's when I decided I couldn't be silent and needed to take a stand on the issue.

Is there anyway you can save the world from George W. Bush?

Do you think it is possible to pray the gay away?

I think God can do anything, but that's highly unlikely because I don't think being gay is a sin. e

Please keep up this work. I am not bullshitting you when I say that it is an amazing concept and I hope that people will get behind you with whatever support that you need.