Documentary gives a frightening view across the cultural divide 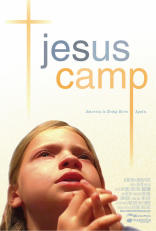 The scariest movie release of the autumn season is, in fact, a documentary. Jesus Camp takes viewers to the heart of America's culture divide as it profiles three children being groomed to become foot soldiers in "God's army" at a summer camp for charismatic evangelical Christians.

This is a movie that many Christian conservatives don't want you (or their followers) to see. Heidi Ewing and Rachel Grady's incisive film looks at a summer camp for charismatic evangelical Christians run by Pastor Becky Fischer in Devil's Lake, North Dakota. The movie has won critical praise for providing greater social context to the growing Christian right community's influence on the political sphere of America.

It's earned condemnation as well from religious conservatives such as Rev. Ted Haggard -- whose constituency at the National Association of Evangelicals is 30 million strong. Haggard has spoken out against the film, claiming that it makes evangelicals look "scary." His condemnation apparently chilled the film's opening in 13 theaters in Colorado, Kansas, Texas, Oklahoma and Missouri.

The children at Fischer's Kids on Fire camp in North Dakota practice war dances in camouflage and face paint and they make straight-armed salutes to a soundtrack of Christian heavy metal. They weep and speak in tongues as they are seized by the Holy Spirit.

Pastor Fischer equates the preparation she is giving children with the training of terrorists in the Middle East. "I want to see young people who are as committed to the cause of Jesus Christ as the young people are to the cause of Islam," she tells the camera. "I want to see them radically laying down their lives for the gospel, as they are over in Pakistan and Israel and Palestine.")

Find out what the fuss is all about — click here for the Jesus Camp website, where you'll find the movie trailer.