Southern Baptists Rely on Deception in Effort to Convert Jews

Two recorded conversations — one with Rabbi Barry Block and Rabbi Neal Katz, and the other with members of the Institute for the Study of Christian Zionism — are part of this report. 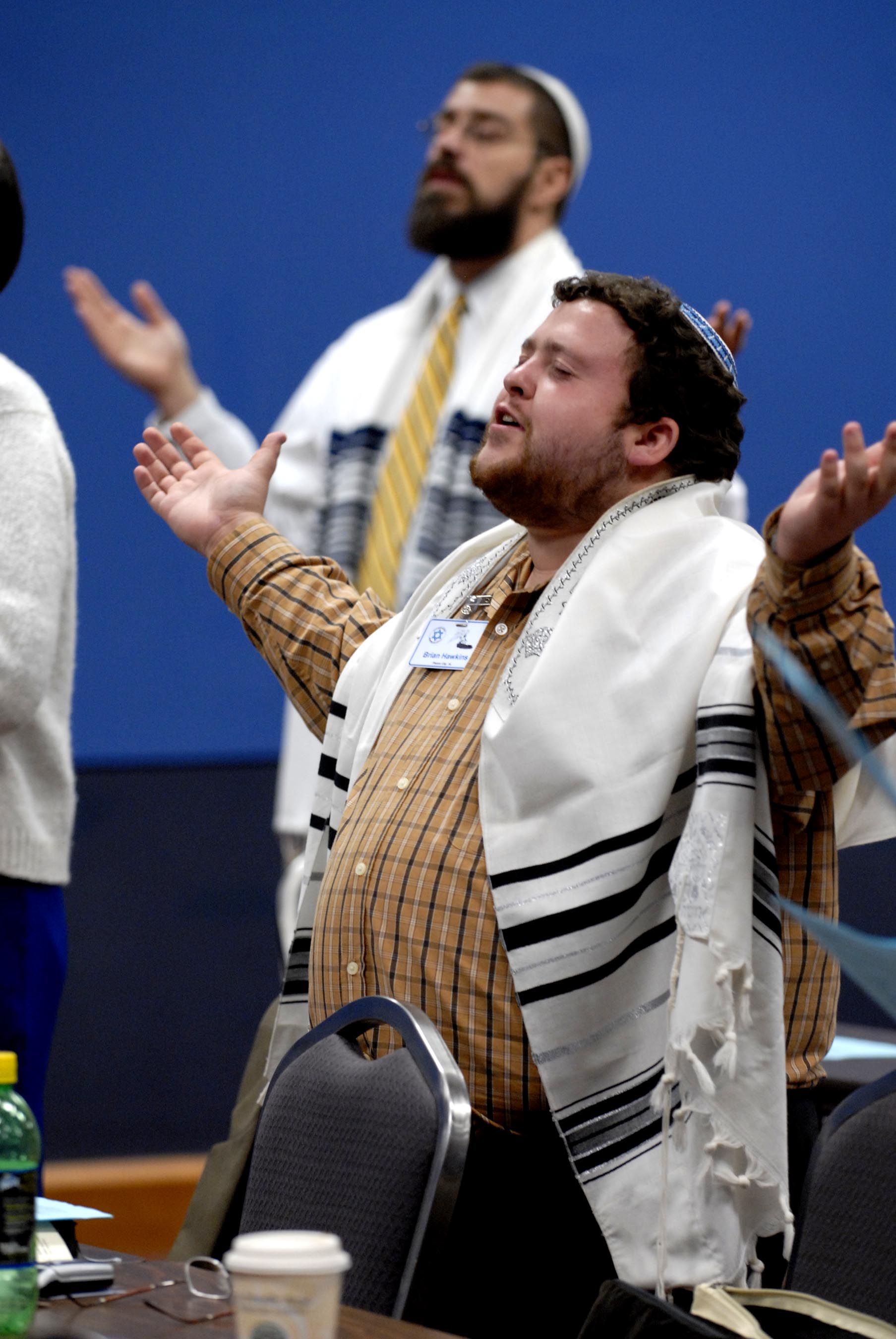 Six million Jews and only 15 Southern Baptist Messianic Churches! A Southern Baptist Convention (SBC) official's recent juxtaposition of the US Jewish population (and, by inevitable association, the number of Jews killed in the Holocaust) with the SBC's main vehicle for converting Jews raised this question: is the SBC's objective to empty Judaism of American Jews and make them all Messianic Southern Baptists?

At its 1996 annual meeting, the Southern Baptist Convention resolved to focus on converting Jews -- specifically to "direct our energies and resources toward the proclamation of the Gospel to the Jews." This year's meeting afforded a look at how the SBC goes about evangelizing the Jews through the Southern Baptist Messianic Fellowship.

The "messianic" -- Jesus worshipping -- congregations endeavor to appear "Jewish" in order to provide a reassuring display of Jewish symbols to potential converts. Rabbis contacted for this report deemed the Jewish facade deceptive.

Additionally, both the rabbis and Christian clergy contacted by JewsOnFirst were critical of an effort during the meeting to inculcate the messianic Baptists with end-times beliefs known as Christian Zionism.

Messianics meet under SBC wing
During its annual meeting in San Antoinio, a meeting that dovetailed with the SBC's annual meeting, the Southern Baptist Messianic Fellowship (SBMF) heard a representative of the SBC say that the fellowship needed to expand to reach all the Jews in the United States. The SBC's Baptist Press reported:

... Aslam Masih of the North American Mission Board [of the SBC] addressed the group about how they can better reach Jewish people with the Gospel. Masih is a national church planting missionary for Middle Eastern and southern Asian people groups.

Masih pointed out that the United States has the largest number of people groups in the world and that success in winning the lost at home translates into reaching the world for Christ -– because those people will take the message to friends and family in their native lands.

The Jewish population in the United States numbers than 6 million, Masih said, and there are only 15 Messianic Southern Baptist churches.

Does that mean the Southern Baptist Convention wants to empty Judaism of all 6 million Jews and put them all into the messianic Southern Baptist faith? JewsOnFirst asked both the SBC and Masih.

John Revell, director of the SBC's Office of Convention Relations, told JewsOnFirst that the SBC "has not targeted any particular group" for evangelizing. Revell added: "the goal is not to get someone to abandon their faith, but to recognize who Jesus is."

Aslam Masih, who made the statement about six million Jews, professed not to immediately know what he had meant by it. Reached at his home on June 22nd, Masih took several minutes to open the web page of the Baptist Press report about his speech and locate his statement, saying that he needed to see "the context" of his statement.

As he seemed to be perusing the statement, JewsOnFirst asked: "Did you mean that all six million Jews should be removed from Judaism and converted to the messianic Southern Baptist faith?" Masih replied, "No, no, I did not say 'converted.' What I'm trying to say here, I'm trying to understand who was there. I still need to look at it in what context I said it. Let me check it out and see what context it was in."

After several more requests to comment on the statement were met with the same reply, JewsOnFirst asked Masih if his remarks had been written or off-the-cuff. He said he had not written his remarks.

A question unanswered
Finally, Masih agreed that JewsOnFirst could call him again on Monday morning. Two calls to Masih on Monday were not returned.

The Southern Baptist Messianic Fellowship understood Masih to be advocating proselytizing. In a posting about its annual meeting on its website, it talks of a working lunch with Masih and another North American Mission Board (NAMB) official in which "we were able to illustrate the call to us to preach the Gospel to the Jewish people."

The MSBF webiste author talks about an earlier meeting with a Mission Board official at which "[w]e spoke about the vision of the SBMF and our outreach to the Jewish communities all over the USA." The writer also says that Masih and other NAMB personnel "are working closely with us to resource our SBMF ministries."

John Revell of the SBC Office of Convention Relations said the SBC provides no financial support to the SBMF and has no authority over it. He said the entities of the SBC do not endorse congregations.

The SBC is the largest Protestant denomination in the U.S., claiming more than 16 million members.

According to the SBC-controlled Baptist Press: "The Southern Baptist Messianic Fellowship was created in 1990 by a group of Southern Baptist leaders seeking to reach out to Jewish people with the Good News of the Messiah from a biblically Judeo-Christian perspective."

During a recorded conversation with JewsOnFirst.org Rabbi Barry Block of Temple Beth-El in San Antonio connected the messianics' activity with the SBC's 1996 resolution on Jews. "I'm not at all surprised that the Southern Baptist Convention is ... behind all of their efforts," Block said, "because in 1996 the Southern Baptist Convention resolved that it would target Jews specifically for conversion to Christianity. That's what so-called messianic Judaism is all about."

The SBC included photos (shown here) of the Messianic Fellowship ordaining "rabbis" during their San Antonio gathering in the SBC "gallery" of photos of the convention (here, toward the end).

Regarding Revell's statement that the SBC is not specifically targeting Jews, Rabbi Allen Maller (www.RabbiMaller.com), an authority on messianic Jews who recently retired as rabbi of Temple Akiba in Los Angeles, said that the SBC might truly believe that "they don't want to discriminate against Jews by not sharing their good news."

That the SBC is engaged in equal-opportunity evangelizing might not comfort Jews. "We Jews have a history of being persecuted, so we are touchy" about being evangelized Maller said during a telephone interview.

Deceitful practice
The SBMF's method of enticing Jews into Christianity by making it look like Judaism is nonchalantly explained by a 1998 North American Mission Board pamphlet on converting Jews. The pamphlet advises:

The SBMF clergy ordained at the San Antoinio meeting were referred to as rabbis in the SBC photos and a news account. Revell said whether they were called rabbis or pastors would be up to their congregations, not the SBC.

Maller and two rabbis who participated in a recorded conversation with JewsOnFirst co-director Rabbi Haim Dov Beliak said they regard the messianic clergy as Christian. 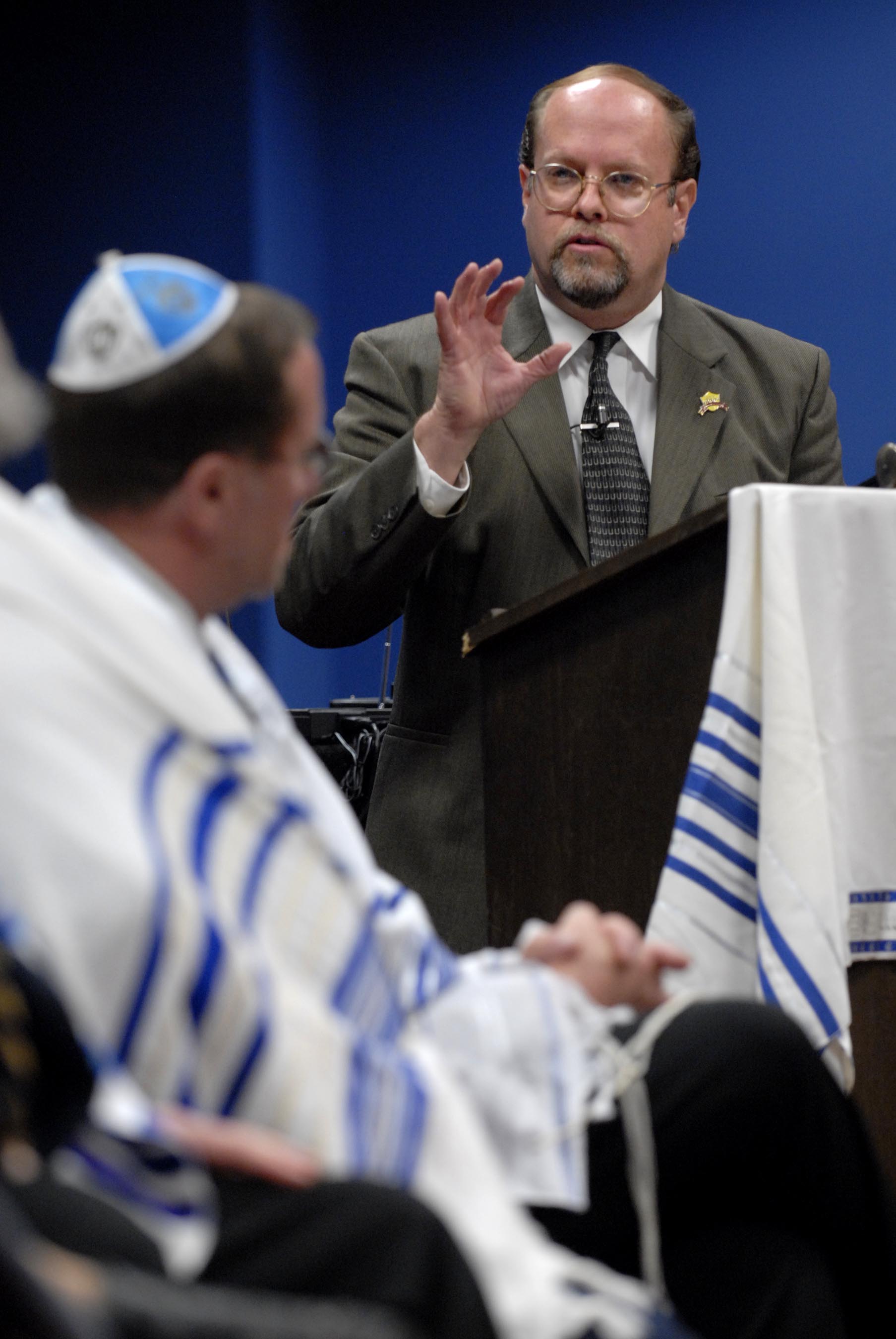 "There are kosher delis and kosher-style delis," said Maller. These are "rabbi-style people" for those who want to be "Jewish-style Christians." He described the training of some messianic clergy as "like all other Baptists but they took a couple of courses about missionizing Jews."

Rabbi Neal Katz of Congregation Beth El in Tyler, Texas said that messianics with whom he was familiar referred to themselves as "rabbi." However, he said "they are not rabbis at all" but Christian preachers who have found a way to misuse Judaism for their purposes. He noted that the messianics also gave their "temples" Hebrew names and used Jewish rituals and accoutrements.

Katz said he has had to explain to local Christians that he and the messianic pastor who calls himself a rabbi are not the same. Following an explanation, the local newspaper stopped listing messianic worship services in the same section as Jewish services.

The Rev. Tony Richie, a Pentecostal pastor in the Church of God in Knoxville who participated in one of the recorded conversations, deplored deceptive tactics aimed at converting Jews. But Richie, said, "there ought to be a way for Jews who convert to Christianity to preserve their Jewish roots in their new congregations.

"Christians masquerading as Jews, I would have trouble with that," said Richie. "While at some level I would agree that you can't be both a Jew and a Christian. I wouldn't take that so far as to say you can't be a Jewish Christian." He added: "The Jewish heritage is a rich, full-orb reality that affects all of life, and a Jew who becomes Christian shouldn't be forced to leave that all behind."

But are they converting Jews?
While there is little disagreement that the SBMF's Jewish patina is designed to reassure Jews that they are not forsaking Judaism, the rabbis contacted for this report were not convinced of the method's success.

Maller believes that only about one-third of the members of messianic congregations are Jewish. "One-third are gentiles, and one-third are half Jewish but were raised as Christians" he said, adding that the latter may "feel a Jewish heritage." In some messianic churches, said Maller, "if you have Jewish ancestry, you have prestige."

Rabbi Barry Block said that in his 15 years in San Antonio none of his congregants has left for either of the two messianic congregations in that city.

Rabbi Neal Katz said: "This movement is less of a threat to us than some people might imagine. I think the press has to work fairly hard to find real Jews in some of these congregations."

UPDATE: The Washington Post reported on June 30th that Jewish groups opposed to missionizing estimate that 200,000 U.S. Jews have "become believers in Christ" over the past 30 years.

Messianic Jews and Christian Zionism
Another speaker at the Southern Baptist Messianic Fellowship meeting in San Antonio was Jack Kinsella, a Baptist minister and publisher of the end-times "Omega Letter." In the language of the Baptist Press, Kinsella spoke about "how Jewish people fit into God's plans."

Christian Zionists such as Kinsella believe, based on cherry-picked biblical passages, that Jesus will return at the culmination of an end-times battle against the forces of the anti-Christ to take place in Israel -- at which point Jews can decide to convert to Christianity or burn in hell. (You can learn more at the website of the Institute for the Study of Christian Zionism, three of whose members participated in a recorded conversation with JewsOnFirst.)

Kinsella was quoted telling the SBMF: "Our obligation to Israel is to bring as many people as we can to the knowledge of who their Messiah is before the anti-Christ shows up to deceive them."

Was he suggesting that the anti-Christ might be Jewish? JewsOnFirst asked John Revell of the SBC. "I don't know of anyone of that belief system who believes the anti-Christ is going to be Jewish," Revell replied, adding that nevertheless, "a number of Southern Baptists believe there will be an anti-Christ."

Rabbi Allen Maller said the anti-Christ is "a personification of everything people believe is bad."

Rabbi Barry Block interpreted Kinsella's statement about the anti-Christ to mean that "Jews will be susceptible to the anti-Christ when the time comes... Sooner rather than later, there is going to be the Apocalypse and those who believe in Jesus will be saved, and maybe we Jews, will be given one last chance but then it's curtains for us."

Participants in both recorded conversations noted that mainline Protestants do not engage in aggressive, deceptive evangelizing.

Rabbi Allen Maller said he invites messianic Christians to talk to his 10th-grade confirmation classes as an innoculation. "I don't invite liberals," he said. "They don't try to convert you. Fundamentalists do."