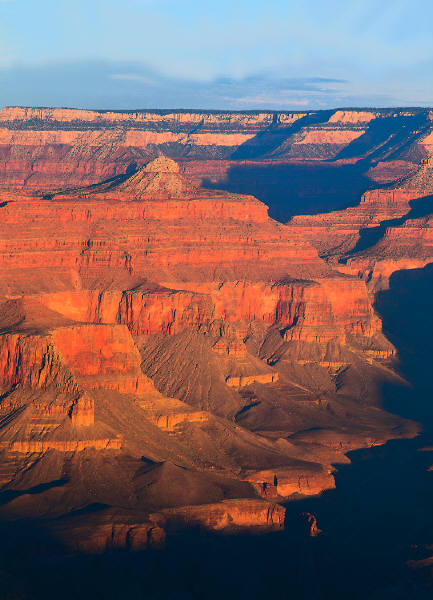 A public employee whistleblower organization has exposed the Bush administration's backtracking on a commitment to consider removing a creationist book from National Park Service bookstores. The book claims that the Grand Canyon formed in Noah's flood, several thousand years ago.

The whistleblower group, Public Employees for Environmental Responsibility (PEER), has launched a public campaign for removal of the book, and, more broadly for "an end to "public dollars ... being spent to promote religion" in the national parks. PEER has posted a petition expressing that position here.

In a telephone interview with JewsOnFirst.org, PEER executive director Jeff Ruch said he was hopeful that the petition will prompt the new Congress to exercise oversight of the Park Service. Ruch identified two other blatant encroachments on the national parks by fundamentalist Christians -- one involving a video shown at the Lincoln Memorial; the second is a cross on public land in the California desert.

The book, Grand Canyon: A Different View, is published by the Institute for Creation Research and explains the Canyon's geological features in terms of the biblical creation story. It is being promoted by Canyon Ministries, which offers a "Christ-centered motorized rafting trip" through the Canyon; it tells its customers the Canyon was formed in Noah's flood.

The Park Service approved the book's sale in 2003, and according to published reports, responded to complaints with a promise to review the decision. PEER determined through a records request that no reconsideration process ever began.

Ruch said that National Parks Service employees sparked the campaign for the removal of the book. The employees, he said, "felt the law is being broken by giving in to Christian fundamentalist groups." They "wanted to share their unhappiness about the book with their employers, the public."

The Mojave cross
The administration is appealing a federal court's ruling that the Mojave cross, as it is called, must be removed from a 30-foot rock outcropping in the Mojave National Preserve. In 2005 the court ruled that a "land-swap" to put into private hands the dot of land on which the cross stands was "a sham." California Republican Rep. Jerry Lewis added the land-swap legislation to a defense bill.

PEER, along with the Jewish War Veterans and the ACLU, sued the administration to force the removal of the eight-foot high cross. A similar land-swap has kept standing the "Soledad" cross in San Diego, which countless courts have ruled must go.

The National Parks Service responded by committing to change the video. Wrote Sheldon on his website:

After Traditional Values Coalition alerted a senior official in the Department of Interior (DOI) about the pro-homosexual, pro-abortion content of a Lincoln Memorial video. National Park Service officials who work under the DOI have decided to modify the controversial video.

According to Ruch of PEER, the National Parks Service has spent a quarter of a million dollars searching for footage.

The PEER petition
In its introduction to the petition urging a halt to the promotion of religion in our parks, PEER states:

"The Bush administration is catering to right-wing fundamentalist groups by agreeing to censor videos, peddle creationist dogma and erect crosses and Biblical plaques in our national parks. Park scientists, curators and managers who object risk their careers.

Separation of church and state is supposed to bar public dollars from being spent to promote religion but the National Park Service appears to be doing just that, installing bronze Bible plaques, litigating to display giant crosses and selling books that deny geology by claiming that the Grand Canyon is the product of Noah's Flood.