Lawyers react to Focus on the Family's attack on Judge Reinhardt

In the February 2006 issue of its online magazine Citizen, Focus on the Family, a major religious-right organization, attacked Ninth Circuit Court of Appeals Judge Stephen Reinhardt. In the course of the attack, Focus on the Family unnecessarily called attention to Reinhardt's Jewish background. (See the summary below.) JewsOnFirst asked Jewish lawyers for their reaction to the Citizen, article. We have assembled their responses below.

The article on Judge Stephen Reinhardt was very troubling. It had an intolerable whiff of anti-Semitism about it, almost compulsively dwelling on Judge Reinhardt's Jewish heritage. My reading of Judge Reinhardt's opinions reveals that he grounds his decisions firmly in the principles of the Constitution and the Bill of Rights, not his religious beliefs. You did a disservice to Judge Reinhart and to the rule of law by insinuating his religion into your profile. That you may see everything through a religious lens is no reason to impose that same refraction on others, particularly a judge who has based his rulings so clearly on constitutional principles.

The article sponsored by the Focus on the Family crowd that is so critical of Judge Reinhardt is just so much pablum. The emphasis on his Jewish background is nothing more than an attack on Judaism by those whose only concern about Israel and Judaism is in the context of their religious views about the Messiah.

The fact is that Judge Reinhardt is a judge's judge who brings life and meaning to the Constitution and the Bill of Rights.

Shame on Focus on the Family for its anti-semitism; and shame on all those in the Republican Jewish Coalition for turning its back on Jewish teachings and its complete re-interpretion of the Talmud as some type of conservative manifesto.

To Focus On The Family: Ladies and Gentlemen, your recent piece entitled "Judge Gone Wild" about Judge Reinhardt perplexes me. It is fair game to criticize the decisions or political philosophy of any judge, including those on the U. S. Supreme Court. So, I have no quarrel with your policy differences with Judge Reinhardt.

However, I find your particular criticism to be extremely un-Christian. Christ was a healer, not a hater. Christ was certainly not a religious bigot and, of course, was a Jew himself. Your attack on Judge Reinhardt was an attack on his Jewishness. For good measure, you also threw in anti-gay rhetoric. I pray for your soul and that Jesus Christ may forgive you.

Thank you for your bringing to my attention the heroic, patriotic positions that Judge Steven Reinhardt has taken to uphold the American consitutiion and thanks also for your recognition that he has done so in the best tradition of his Jewish heritage. How wonderful that this brilliant man has given such leadership to the judiciary that it glows through even the context of slime, distortion, and bias in which you try to malign him. You honor him with your execration and remind those of us committed to basic human rights how indebted we are to him. 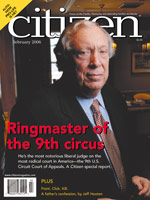 In this attack on a senior appeals court judge, Focus on the Family, a major religious-right organization, has unnecessarily called attention to the fact that Judge Stephen Reinhardt is Jewish in a way that we find offensively anti-Semitic. Early in the lengthy article, readers are alerted to Reinhardt's religion, immediately after learning that his parents worked in the film industry.

Divorced parents, Hollywood friendships and tales of horrific violence that lacked the redemptive power of Christ's atonement -- Reinhardt's childhood was the perfect recipe for the making of a leftist judicial activist.

"He thinks about his Jewish heritage a lot, very much so," Reinhardt's ex-wife, Maureen Kindel ... told Citizen. "He also thinks about the discrimination against Jews that he suffered, of course, when he was younger. ... I'm sure that has formulated his views about being protective of people's rights."

Much of the rest of the long article attacks Reinhardt for his work on the Los Angeles Police Commission. The attacks uncritically echo the positions of former Police Chief Daryl Gates, during whose tenure the LAPD had a reputation as a racist organization with outdated attitudes toward women and gays.

TOPIC: In The Courts