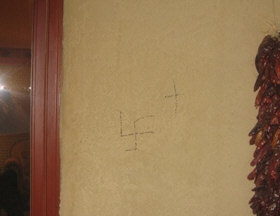 June 16, 2008. Intruders attacked the Albuquerque home of Mikey Weinstein, a leading critic of fundamentalist Christian activity in the armed services. The attack came after nightfall, according to Weinstein, who said family members heard someone running across the roof; they subsequently found a swastikas and a cross scrawled next to the front door.

Weinstein has reported receiving dozens of threatening telephone calls in the years since he filed a lawsuit against the Air Force for religious coercion of Air Force Academy cadets and established the Military Religious Freedom Foundation, which represents members of the armed services who have been subjected to aggressive fundamentalist Christian proselytizing. Authorities are investigating the attack on Weinstein's home.

Meanwhile, in flooded Iowa City, neighbors today blamed a disabled Jewish veteran for the rising water. David Akiva Miller, who is fighting the Veterans Administration over aggressive Christian proselytizing during his hospitalization, was buying groceries on Sunday when an older couple, also shopping, approached him.

In an email, Miller wrote that

The man said something to the lady I couldn't quite make out, and they turned around and stepped back towards me. The man said to me, "You're that Jewish fella that's been stirring up trouble over at the Veterans Hospital, aren't ya?" (Okay, I'll admit I kind of stick out in Iowa City with my long beard, kippah and tzit tzit.) I said, "Excuse me?" And he said, "It's because of folks like you that we got this flood."

Mikey Weinstein's Military Religious Freedom Foundation is representing Miller in his struggle with the Veterans Administration.