The major religious right organizations moved into campaign mode last week by blatantly supporting the Republican Party at a "Value Voter Summit" in Washington, D.C. and in the first of series of arena rallies to turn out Republican voters in swing states.

Following a week of news reports about the IRS scrutinizing (or not) churches' political activities ( see our report) the big organizations shrugged off warnings by Americans United for the Separation of Church and State not to misuse their tax status by engaging in partisan political activity.

The Value Voter event, which took place September 22-24th, under the sponsorship of the Family Research Council, Focus on the Family, and the American Family Association, opened with the leaders of the major religious right groups carping about the failure of the Republicans to enact their anti-choice and anti-gay values agenda.

Nevertheless, the conference showcased Republican presidential hopefuls -- no Democrats -- and as in the past, leaders urged their followers to get active in the election in support the Republicans. James Dobson, the founder of Focus on the Family speaking to his hometown Colorado Springs newspaper said he was "absolutely convinced that there is absolutely is no choice, because the alternative is terrible."

At the September 20th arena rally in Pittsburgh, Dobson argued that the Republicans needed to control foreign policy. According to the Post-Gazette:

"We are at war in this country with an enemy who wants to destroy us," he said. He stressed that only a small minority of Muslims believe that their faith justifies violence, "but let's say 4 percent of Muslims want to kill us ... . That's 48 million people who want to bring us to our knees." 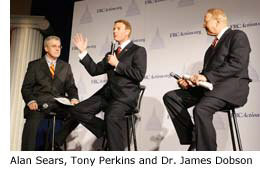 Falwell says Sen. Clinton would rile his followers more than "Lucifer"
Reverend Jerry Falwell was more enthusiastic about the partisan battlefield. Speaking privately during the Washington conference, Falwell said: "I certainly hope that Hillary is the candidate. She has $300 million so far. But I hope she's the candidate. Because nothing will energize my [constituency] like Hillary Clinton. If Lucifer ran, he wouldn't." The Los Angeles Times obtained a tape of Falwell's remarks.

Less than 2,000 attended the summit according to the New York Times. The rally, held in Pittsburgh's Mellon Stadium, reportedly drew only 3,000 and organizers (pictured here) used a curtain to shrink the space.

Americans United warns clergy the tax code bans partisan politics
On September 18th, Americans United announced it was mailing letters to 117,000 churches warning and "reminding them that intervention in partisan political campaigns is a violation of the Internal Revenue Service Code." The letters urged clergy not to cooperate with Focus on the Family's campaign to turn out the religious right vote in swing states. The Pittsburgh event was part of that campaign.

Rev. Barry Lynn, the director of Americans United, slammed the voter "summit" as "a shameless display of partisan politics" put on by religious right leaders who know their power depends on keeping the Republicans in power. Lynn also registered for the "summit."

An Open Letter to the Reverend Barry W. Lynn
Dear Reverend Lynn, I want to take this opportunity to thank you for your presence this weekend at our Washington Briefing, Values Voters Summit 2006. I was delighted to see your name as a paid registrant for a number of the activities. As head of Americans United for Separation of Church and State, you, of course, disagree with us on a number of issues. Your support of same-sex marriage and abortion coupled with your opposition to school choice and any public recognition of God would make most people think our differences are vast. However, your willingness to attend our Briefing shows that even you recognize the importance of concerned citizens being involved in public discourse. While you are here, I recommend you attend our Saturday session, "The Role of Churches in Political Issues," moderated by Dr. Kenyn Cureton with speakers Rev. Herb Lusk, Rev. Dr. Richard Land and Rev. Dr. John Guest. I am sure you will find it enlightening as the panelists discuss how to apply the teachings of the Bible to the issues we face today. It is reported that many Evangelicals do not vote and I'm sure you would agree such citizenly neglect is detrimental to any democracy. That is why we are holding our Briefing and also participating in nonpartisan get-out-the-vote rallies around the nation. Thanks again for being with us.

The two events followed the disclosure of a memo by the Kansas Attorney General showing plans for an election committee "in every church." It also followed an IRS summons to the liberal All Saints Church in Pasadena in an investigation which many regard as harassment. (JewsOnFirst reported last week on these developments. Please click here)

No pretense of nonpartisanship
Focus on the Family and the other groups sponsored the summit through their "action" arms, ostensibly separate groups organized under another section of the tax code that permits partisan activity. The churches these groups recruit, however, do not have similar organizational "alter egos."

The Post Gazette said of the Pittsburgh arena rally:

Although tax law forbids Dr. Dobson's Focus On The Family Action, the nonprofit organization that sponsored the rally, to endorse candidates, organizers said that last night's Stand for the Family Rally was held in Pennsylvania because of its high-profile U.S. Senate race

At the Washington voters' summit, "Dobson joined other evangelical chieftains in lobbying pastors to feel more free to advocate for conservative causes from the pulpit despite recent investigations by the Internal Revenue Service into alleged partisan activities by churches," according to the Los Angeles Times,

The conference included a workshop entitled "Getting Church Voters to the Polls," according to the Kansas City Star. The New York Times reported:

Even in this crowd of nearly 2,000 Christian conservative activists, some balked at one tactic recommended to turn out church voters. In a workshop, Connie Marshner, a veteran organizer, distributed a step-by-step guide that recommended obtaining church directories and posing as a nonpartisan pollster to ask people how they planned to vote.

Using churches as campaign operations has allowed Republicans to pull off improbable victories before, most notably in the 2004 presidential election. Despite polls showing the Democrats poised to win a number of contested congressional seats – and despite the religious right's moaning and groaning about disaffection with the GOP – Falwell, according to the Los Angeles Times, expressed optimism about November's outcome: "I think we're going to keep the House and the Senate," he said. "I think the Lord will take care of that."