Posted here: Case documents including the deposition of Shirley Dobson, wife of Focus on the Family Founder and head of "Task Force" that hijacked the National Day of Prayer

Crabb's ruling (in the unlikely event that it is not appealed) will end the annual presidential proclamations of the national day that the law requires. Under previous presidents, Dobson's Task Force used those proclamations to enhance the perception that the Task Force was an official government operation. As JewsOnFirst.org's campaign for an Inclusive National Day of Prayer has documented, Dobson's Task Force strictly limits participation in its events to certain evangelical Christians. Judge Crabb dismissed the case against Dobson (pictured here) in March, but the transcript of Dobson's deposition, provide a detailed description of the Task Force's practices, most notably its use of public officials and government buildings for its events.

Controversy generated by groups like the Task Force
In her ruling, Judge Crabb noted that "much of the controversy" over the National Day of Prayer "has been generated by events of private organizations such as the National Day of Prayer Task Force. However," continued Judge Crabb, "government officials, including former Presidents, have sometimes aligned themselves so closely with those exclusionary groups that it becomes difficult to tell the difference between the government's message and that of the private group."

In a brief, Justice Department lawyers defending President Obama (and the day of prayer statute) against the lawsuit, brought by the Freedom From Religion Foundation, distinguished Obama's handling of the day from his predecessors. They noted that last year the president had declined quote the Task Force's "theme" in his proclamation, despite the Task Force's request that he do so. Last year JewsOnFirst joined the Interfaith Alliance in asking President Obama to issue a single proclamation that was inclusive and not delivered directly to the Task Force. The President issued a single, inclusive proclamation that was not posted until the afternoon of May 7th. "Accordingly," states the brief, "President Obama's proclamation was not used at all during the Cannon House Office Building ceremony, by the NDP Task Force's coordinators." 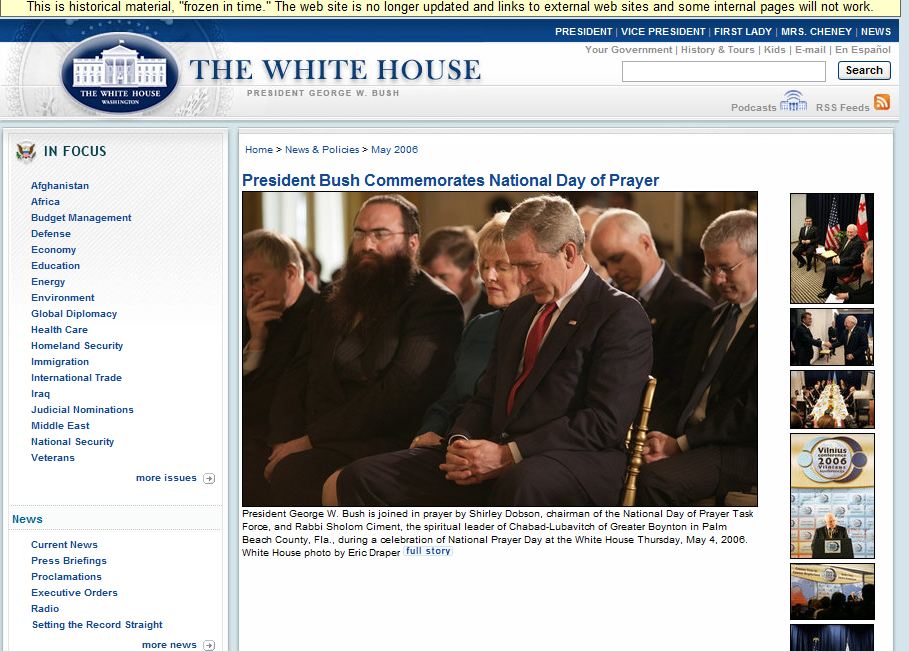