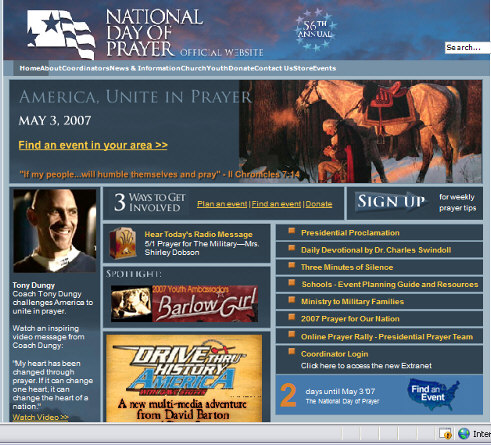 Major figures on the Christian Right are pulling out all the stops to simulate an official, government-endorsed national prayer day scheduled for Thursday, May 3rd.

Focus on the Family, regarded as the nation's most powerful religious right group, effectively controls the day's events, according to news reports and interfaith non-profits.

On Monday, Focus on the Family Chairman James Dobson thanked his followers for successfully badgering New York Governor Eliot Spitzer into becoming the 50th governor to sign a proclamation for the National Day of Prayer.

Dobson's wife chairs the self-appointed National Day of Prayer Task Force. The group is organizing prayer events in and near official buildings and schools to give the impression of government-endorsed religion. Interlinked websites promoting this year's event (listed on the task force home page pictured here) also include web pages on evangelizing military personnel. We've provided examples and links at the end of this report.

One of the interlinked websites operated by the pseudo-official Presidential Prayer Team promotes a "National Observance" from Washington DC, bidding the public to: "[j]oin with us as we celebrate America's 56th annual National Day of Prayer from our nation's capitol." James Dobson will be one of the presenters.

In a statement issued last week the Texas Freedom Network warned that the task force -- "sometimes with the tacit approval and support of elected local and national officials – uses the day to promote 'culture war' battles that divide, rather than unite, our nation."

Both the Salt Lake Tribune and the Colorado Springs Gazette report that non-Christians participants have been turned away from events. The Gazette interviewed a woman who says she is no longer allowed to be an coordinator because she invited people of other faiths to participate in an event she organized.

Focus On the Family attack on Governor Spitzer
The appending of "Judeo" like a fig leaf over sectarian, right-wing evangelical Christianity, is particularly insolent in light of James Dobson's harassment campaign against New York Governor Eliot Spitzer. Dobson's message about Spitzer had a distinctly anti-Jewish edge.

On April 27, Dobson emailed his supporters and posted on his CitizenLink website this message:

We want to make you aware of a slap in the face the governor of New York has delivered to people of faith all across the country.

Gov. Eliot Spitzer – who just a few days ago promised to sign a bill to legalize same-sex marriage in his state, should one land on his desk – apparently has refused to sign a proclamation supporting Thursday’s observance of the National Day of Prayer. The governors of the other 49 states have already issued such proclamations, acknowledging the need for America to unite in prayer. How arrogant that the governor of New York, which was the target of the vicious and unprovoked attacks on 9/11, does not believe the people of his state need divine guidance and protection.

Won’t you take a minute or two – no matter what state you live in – to let Gov. Spitzer know what you think about his refusal to acknowledge the National Day of Prayer? Remind him that this country was founded as a Christian nation – and he will insult and offend millions if he continues down the path he is on.

Scant news coverage of Christian Right's takeover of prayer day
Moderate Christians, Catholics, Mormons, Jews, Muslims, Hindus and others who, in past years participated in prayer day events, are critical of the religious right's takeover of the event. Among the critics is the Interfaith Alliance which represents mainstream faith traditions.

But the American people are unlikely to learn about the religious right's takeover because, to date, no national newspaper or network has exposed it. The Salt Lake Tribune published a story Friday about the exclusion of non-fundamentalist Christians by the Focus on the Family-dominated National Day of Prayer Task Force. And on Saturday the Gazette in Colorado Springs, where Focus on the Family is based, wrote in some detail about the takeover and noted the religious right political agenda for which prayers were crafted.

Accessible extremism
There is not much mystery, should the national media come looking. The extremism of the groups participating and their agendas are immediately evident on web pages linking from the home page of the "official website" of the National Day of Prayer Task Force. The links on the lower right quarter of the page go to a network of websites showcasing other Christian Right groups.

Most notable among these is the "Military Ministry" link found in the left margin of the Task Force's military page, a few inches above the Oliver North link. Military Ministry is one of the many innocuously named operations of Campus Crusade for Christ.

A click on the "Evangelism and Discipleship" menu item brings up a video in which the speaker says: "Military Ministry’s first strategic objective is to Evangelize and Disciple All Enlisted Members of the US Military. We seek to provide every uniformed son and daughter of America with an anchor for the soul through Jesus Christ. This process begins at the recruit training bases…boot camps…where new troops are transformed physically, mentally, and ideally… spiritually."

The schools link offers a curriculum with a "Christian worldview" by David Barton, a religious right leader who argues that the US was founded as a Christian nation. The schools link also offers a kit to organize a prayer day at school and an "adopt-a-leader" program, which encourages children to pray for their political leaders.