On June 11th the progressive website t r u t h o u t reported that a chaplains' website at Ft. Leavenworth had posted Bible study materials that appeared to be anti-Semitic. Clergy asked by JewsOnFirst.org to assess the materials said that the Bible passages disparaging Jews on the website were generally regarded in a historical context relating to the development of Christianity. The Christian noted that today's mainline Protestants avoid those passages because of their potential for divisiveness.

The Army removed the materials from the Ft. Leavenworth website on June 12th. We have posted some of them here at the JewsOnFirst.org website. Below the links to the documents, you'll find two screenshots of the website, as it appeared earlier this week. The dismantled website is here.

The Bible study materials and other documents were discovered by the Military Religious Freedom Foundation, according to Truthout.

Clergy find postings inappropriate
We asked Christian and Jewish clergy to evaluate the posted Bible study materials on Nehemiah and Galatians which were the focus of the Truthout report, Several said that the materials were unsuitable for a military website because they encouraged divisiveness -- especially the passages disparaging Judaism.

The Galatians passages criticize "Judaizers" (Christians who wanted converts to go through Jewish conversion rites) and the accompanying study questions contain one that states: "the Judaizers were zealous people much like the zealous Moslems have become today." A Nehemiah study question asks: "Do you see any similarity in the problems and attitudes that confronted early Zionism, 24 centuries ago, and the conflict that exists today between the Jews who have returned to their ancient homeland to reestablish Israel and the long-time Arab inhabitants of that same land?"

Anti-Semitic passages in the New Testament are "not news"
Addressing these passages and the interpretations, Rabbi Joel R. Schwartzman, a retired military chaplain, wrote in an email to JewsOnFirst.org:

That there are passages in the New Testament that are anti-Semitic is not news. That these passages may also be seen at anti-Jewish is, for me and many. many Jewish scholars and laypeople not in doubt. Early Christianity needed to separate itself from Jewish practice and belief. Historians tell us that they were persecuted for these attempts. That they responded with anger and derision is, therefore, not all that surprising. The New Testament often sets Jesus against his Pharisaic brothers, setting the stage for a triumphalism that has been extant in Christianity for centuries and only recently has come under review in some Christian circles.

Two Christian ministers found the interpretation of the selected text to be foreign to their mainstream faith traditions.

"The questions and the inferred and supplied 'right' answers are far out of the mainstream of Christian theology," said Rev. Mark Johaningsmeir of the Rocky Mountain Conference of the United Methodist Church. "These materials offer no historical background. Nor do they offer any help in bridging the enormous religious and cultural gap between First century CE and our early 21st century CE. As such, I would judge these materials extremely misleading and unhelpful."

Johaningsmeir, who initially wrote his comments to Mikey Weinstein of the Military Religious Freedom Foundation (MRFF), consented to JewsOnFirst publishing them. The MRFF discovered the Ft. Leavenworth documents.

For Episcopalians, historic context adds to the depth of Scriptural interpretation. So Paul's disputes with other Christians are seen as offering an example of how easy it is for Christians to tear into each other in disputes, with terrible results. In other words, Galatians is not a "go and do likewise" account but rather, in part, an example of how Christians who are not seeking reconciliation with each other so quickly can get off track.

Paul says some good things in this letter, but too often for the wrong reasons. He also says some really odd things because he is off track. Fortunately, Episcopalians see the Gospels as the primary documents of the New Testament, and the rest of that set of Scriptures as secondary. In other words, we do get to pick and choose what part of Galatians we think are helpful to a more faithful life, unlike Christians who take Scripture, especially the New Testament, as literal truth or at least as equal truth within the New Testament.

On the other hand, Rabbi Bruce Kahn, who served as an active and reserve Navy chaplain for 32 years, assessed the Ft. Leavenworth chaplains' materials as "reflect[ing] an absolutely mainstream Christian Bible study point of view. To look at Tanakh [the Hebrew Bible] through the eyes of New Testament as understood in a conservative Christian setting is ho hum. This is not anti-Semitic. It is not anti-Jewish. It is pro Christian."

If someone expects Christian Bible study to be presented with full sensitivity to Jewish views, that just does not make any sense. It does not happen in civilian churches and it won't happen in Christian Bible studies in the military. In our synagogues we don't teach Torah with a view toward Christian attitudes to the text and when I teach Tanakh for Jews in the military I don't teach with a concern for what Christians would think of it. And I taught courses on differences between Judaism and Christianity that I am sure a lot of Christians would not like very much.

However, Kahn added, noting that one of the web pages was entitled Fort Leavenworth Bible Study Rules, "were I writing this piece, I would have titled it 'Fort Leavenworth Christian Bible Study Rules.' I would wonder what Bible study opportunities were being offered Jews and members of other groups that would not feel well instructed in this fundamentalist Christian Bible study atmosphere."

Ft. Leavenworth says there was a "need" for materials
In a statement issued today, Ft. Leavenworth officials took the position that "the material was part of a Protestant study of the Bible and as such, contains theological material related to the New Testament. The purpose of the material was to foster an understanding of historical context and contemporary application and was not intended to demean or be offensive to any other faith tradition or community."

The statement also says: " This material is made available on a public web link because there was a need for it among study groups and it was a way of getting the information out to the community." The statement said the web pages had been taken down for review.

The contract Rabbi for Fort Leavenworth, Rabbi Alan Klein, said in a statement released through the base Chaplain that the texts are, "in my experience fairly standard conservative Christian Bible studies. While they assert the primacy of the Christian message, they do not incite followers to attack Jews now or then. They do encourage Christians to try to convert Jews. That's not anti-Semitism. It can lead to anti-Semitism, but so can any number of views when taken to the extreme."

Rabbi Klein added: "I am satisfied that no one is forced read these. That's enough for me."

Rabbi Schwartzman, the retired military chaplain, found the posting of the materials on a government website to be inappropriate. He said: "given the purposes of the United States military and the necessity of that military hierarchary to build team work rather than to encourage disparagement and dissension, the textual studies at Fort Leavenworth, Kansas, are deeply disturbing and wrong headed."

Rev. Johaningsmeir also found the posting of the documents inappropriate. He wrote: "I could lay out some of the particulars about the content of the study on the Galatian Epistle which I find deficient - but the more substantial issue is that we now have officially sanctioned materials that promote an extremely narrow slice of one particular religious tradition - to the exclusion of all others. And this I find distinctly unAmerican and unConstitutional. I also find it offensive to see my tradition represented by such a bigoted and inhospitable viewpoint."

If there is a difference between anti-Judaism and anti-Antisemitism in theory, it is lost in practice. Consequently in the Episcopal Church we treat the passages of the New Testament that describe Jesus' or Paul's objections to Judaism, or reformers in the Hebrew Scriptures complaining about priests, etc., as issues with authority figures/structures of power, with the result being that the objections apply equally to anyone with power regardless of their theologies or historical era. Therefore we apply them to the Episcopal Church in the U.S., for example, as we fail to care for the widow and orphan. Clearly the writer of these documents does not take this perspective and approach to such Scriptures, regardless of where they appear in the Bible.

Added Gray: "Historically, anti-Judaism has led to anti-Antisemitism quickly and easily, which is another reason for the Episcopal perspective on these passages (the first being that we want them to challenge ourselves when we have power). Any time a people is labeled as not being of God, they become vulnerable to a wide range of attacks by people who see themselves as favored by God, all too often with bloody results. It is not just a matter of differing theologies, but instead is a matter of trying to keep people safe from harm."

Biblical soldiering
In addition to Bible study materials on Nehemiah and Galatians, the now dismantled Ft. Leavenworth site included a number of other documents, some of which we've posted below.

One document, "Soldiering, a Biblical Perspective," imputes military leadership qualities to Jesus. This Christian warrior notion is an important element of the right-wing evangelical Christianity that has been gaining influence within the US military in recent years (more here).

Documents removed from the Ft. Leavenworth website on June 12, 2007

Please note that these documents are PDF files. 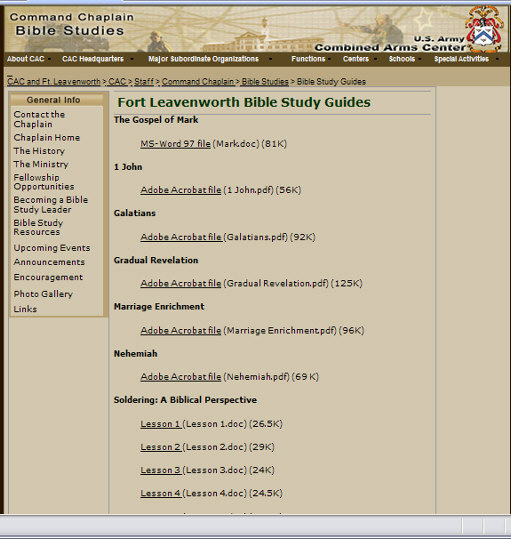