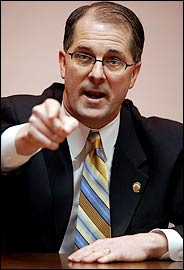 In a tough battle for reelection, Kansas Attorney General Phill Kline gave his campaign staff detailed instructions on how to use churches to raise funds, recruit campaign volunteers and collect voter contact information. He wrote the instructions in a memo obtained by news organizations and JewsOnFirst.org.

Kline writes that the "goal" of receptions, which his staff will organize to dovetail with church services, "is to walk away with contact information, money and volunteers and a committee in each church." He names three of the churches already involved in his campaign.

Kline's August 8th memo lays bare for the world (including Democratic Party leaders who might care to protest) the details of how at least one Republican on the religious right uses churches for electoral operations. There is no reason to assume that Kline just created this campaign model.

Kline's closing instructions about telling cooperating churches how to protect their tax-exempt status, are nonchalantly dismissive. He tells his staff to prepare a "2-pager," only part of which will be about what the law allows.

Should prepare guidance sheet for those who are showing the church video. 2 pager that includes: goals for showing the video, IRS rules guidance regarding what they can and cannot do (this should not take long -- no use of church assets -- can show it at church as long as they do not deny opposition of showing their own video -- no need to invite the other, just cannot deny -- etc)

"Our efforts in the churches"
Kline is known beyond the realm of bright-red Kansas Republicanism for demanding abortion patients' records and ordering healthcare providers to report teenagers who have sex.

Kline writes that his staff should use the memo (which you can see here) as "a checklist to improve on our efforts" in the churches. He directs them to "maximize my presence in a community. Where possible, get additional churches involved."

Kline tells his staff how to form a campaign committee for him at each church that will educate and register voters, "encourage people to contribute and volunteer" and network with their own email lists. He instructs:

Recontact all churches and specifically get in touch with key contact there to form a church lay committee for the campaign.

In the memo Kline lays out how to move church-goers from services to nearby campaign receptions, scheduled "as close to service time and as close to church as geographically possible... If out before 12 noon -- make the starting time before that time."

He directs that the reception hosts should hand out invitations at services, and that the campaign should "attempt to get the pastor to mention" the event. He also wants the pastor's help with fundraising:

Get the pastor to invite five 'money people' whom he knows can help. As much as possible, get the pastor's commitment to attend and to get these five people there.

Later in the memo, Kline reiterated the importance of getting pastors committed to his campaign events, directing his staff:

On receptions-- please follow up contact with hosts to help them maximize attendance at receptions: One invite and one mention will not draw a crowd. Pastor and hosts must be willing to call their top 5 and get them there.

Kline also ordered: "Staff, must must must, get everyone's email who attends. Don't wait for them to fill something out. Go get their e-mail."

He discusses showing a "church video" at receptions.

Three cooperating churches named
In a section of the memo entitled "Turn out voters," Kline makes it clear he wants his campaign to organizing church committees to get their members to the polls for him. "Sign up folks to help with lit drops etc."

And he names three churches that "have already volunteered to do this:" Light of the World in Topeka, Wannamaker Woods Nazarene Church, Basehor-Linwood Church.

Later in the memo, Kline instructs the staff on "maximizing exposure at every church," advising them to "check and work with the pastor to see what is comfortable."

Still later he directs that "all churches should be contacted about our Kick-off rallies."

He also refers to getting "Dobson by phone," presumably a reference to Focus on the Family head James Dobson, for unspecified campaign help.

Kline's opponent disparages operation
Kline's memo surfaced when it and related documents were sent to Kansas statehouse reporters in envelopes from "Concerned Citizens, Everywhere, KS." It is addressed to Kline's campaign manager, Bill Roche, and a campaign volunteer, Sylvia Chapman. It was copied to Doug Henkle, identified in news reports as both a campaign aide and a member of Kline's attorney general staff.

During a candidates' debate last week, Kline defended the memo. His opponent, Paul Morrison, a Kansas City-area district attorney who recently switched his party affiliation from Republican to Democrat, said: "I have never -- and never will -- view a church as a political machine for me."

The Associated Press quoted Barry Lynn, executive director of Americans United for Separation of Church and State, terming the Kline memo "beyond the pale."

Kline has been battling in court for access to abortion clinics' patient records. He says he wants the records to help prosecute rapists. Morrison has pledged to end the fight for patients' records.

Healthcare providers successfully sued to overturn Kline's order that they report teenagers who have had sexual relations. These professionals worried that the regulation would deter teens from seeking treatment for sexually transmitted diseases. >In April a federal judge issued a permanent injunction against enforcement of Kline's order.

What's wrong with this picture?

What's wrong with churches raising campaign funds, recruiting volunteers, signing up friendly voters, turning congregants out to vote -- and doing all this for one candidate in a partisan election? This describes exactly the work that Kansas Attorney General Phill Kline directs his staff to do with cooperating churches, as his memo, obtained by JewsOnFirst (see main story), makes explicitly clear.

What's wrong with Kline's staff reminding churches that hosting one candidate and not inviting competing candidates is okay, as long as churches don't deny a platform to the competitors (if they find out about the event and ask for an invitation)? What's wrong with churches following those guidelines, crafted by Kansas' top attorney?

To begin with, it is certainly an abuse of churches' tax-exempt status. If the practices Kline recommends are not outright illegal, they certainly stretch the letter of the law to the snapping point. And they ought to be explicitly banned as legitimate activities for tax-exempt organizations.

It is important to consider that the very week that the Kline memo surfaced, the Bush administration's Internal Revenue Service issued a sweeping subpoena to All Saints Church in Pasadena, California for documents concerning the church's activities related to the 2004 presidential campaign. The IRS, which oversees tax-exempt organizations, has been "investigating" All Saints since June 2005 because of an October 2004 sermon.

The sermon, by the Rev. Dr. George Regas, the rector emeritus of All Saints Church, did not advocate voting for or against a candidate. Tax-exempt groups are not allowed to do this.

The IRS probe of All Saints Church has been widely condemned as harassment of a prominent liberal opponent of the Bush administration.

In a telephone interview today with JewsOnFirst, Regas expressed support for the bar on supporting candidates. "Our position at All Saints Church all these years is that we do not deal in a partisan way with candidates," he said. Regas was adamant though, that "the church has a right to be a critic of the state," particularly on essential issues like war.

He said that All Saints Church is not likely to hand over the documents to the IRS without being ordered to by a federal judge. "I think that the church will let the IRS take them to court and see what happens," he said.

The IRS recently concluded without action a similarly heavy-handed probe of the National Association for the Advancement of Colored People, begun at the request of Republican elected officials after an NAACP leader criticized the Bush administration.

It is also worth noting that mainstream clergy in Ohio have complained twice to the IRS about the overtly partisan political activities of "patriot pastors" backing the Republican candidate for governor, Ken Blackwell.

The IRS has not given any indication that it is investigating in Ohio. Will it announce an investigation of churches who help Attorney General Kline in these final weeks of his campaign?

The IRS Investigation of All Saints Church

On Friday, September 15, 2006, All Saints Church and Rector Ed Bacon received an administrative summons to appear before the IRS with documents. The church issued a press release outlining All Saints Church's reaction to the procedural and substantive issues raised by the summons. Click here to read the news release, a PDF document..

To read a July 24, 2006 letter from the IRS to All-Saint Church's attorney, Marcus Owens, click here.

To read the September 15, 2006 summons of All Saints Church and its Rector by the IRS, click here.

BALTIMORE, MD— The Internal Revenue has informed the National Association for the Advancement of Colored People (NAACP) that it has concluded its examination of NAACP activities and determined the Association did not violate conditions of its tax exempt status.

“We have determined that you continue to qualify as an organization described in IRC section 501(c)(3),” the IRS wrote in a letter to the NAACP dated Aug. 9. IRS official Marsha A. Ramirez said that a review of video footage of the Bond speech and other information indicated “that political intervention did not occur.” Continue.