Kentucky Jewish leaders chide legislators for their preoccupation with religion

Interview with H. Philip Grossman, a leader of the Louisville Jewish community

Before it wrote its open letter chiding Kentucky's legislature for being preoccupied with religion, the Community Relations Council of the Jewish Community Federation of Louisville had been silent on church-state issues for several years. That the organization, representing Kentucky's largest Jewish community, is now speaking out, underscores how seriously its leaders regard the situation according to Philip Grossman, the immediate past chairman of the Community Relations Council. 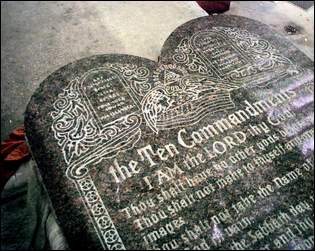 In an interview with JewsOnFirst, Grossman said it was also significant that the letter was bipartisan, signed by prominent Jewish Democrats and a prominent Jewish Republican. Grossman is one of the four signatories.

The writers express concern that the "climate in Frankfort is becoming less conducive to bringing people together around shared values and interests" at the very time when unity is needed "to improve health care and education and to reduce poverty and crime."

They also express concern about House Bill 277, which calls for placing the Ten Commandments on display and putting the motto "In God We Trust" over the House Speaker's dais.

Additionally, they note that Senate Bill 236 is still pending. That bill strips the state's courts of jurisdiction over issues relating to the placement of the commandments and the legislature's own behavior.

The letter also mentions a governor's prayer breakfast which was not inclusive and a survey probing legislators' devotion to Jesus Christ.

Grossman said only "a few" legislators have responded to the message thus far.

Even though Democrats dominate Kentucky's lower house, the vote for the bill was a lopsided 90-5.

Democrats going along
Grossman said, "both Democrats and Republicans are going along with the religious legislation because they are worried about the political fallout if they don’t ." The sole Jewish member of the legislature "has steadfastly stood against this legislation.”

Jews constitute a distinct minority of Kentucky's four million people. In addition to the 8,000 to 10,000 Jews in Louisville, there are small communities in Lexington, Paducah, Owensboro and in the northern part of the state near Cincinnati.

Asked whether he believes that some Kentucky legislators are intentionally undermining the First Amendment's prohibition on state-sponsored religion, Grossman answered that "some of the legislators are not sure if they are going over the line." The courts, after all, have allowed religious displays if they are mounted in a historical context. "But the reality is that encouraging communities to approach the line, will mean that many will cross it."

Moreover, he said, "there is also a group of legislators who are not concerned about" crossing the line and they tend to create a climate of religious activism that has "a gathering force behind it."

He said he has not seen a specific rise in anti-semitism as a result of the legislature’s activity. "To be clear," he continued, "I don't think the religious fervor is directed specifically toward the Jewish Community. Other minority communities are also uneasy. While some, perhaps well meaning, legislators see this legislation as consistent with their beliefs, for others of many backgrounds, it creates a very uncomfortable environment."

In an article published the same day it published the Community Relations Council's letter, the Louisville Courier-Journal quoted representatives of minority groups and Christian groups concurring with -- and expressing appreciation for -- the Jewish community's message.

Grossman puts the legislature's recent actions in the perspective of Kentucky's long history of Ten Commandments litigation. The American Civil Liberties Union won a case against McCreary County last year, when the Supreme Court ruled a religious display unconstitutional. A federal appeals court recently ruled against the ACLU in a case involving a similar display, saying that the display was constitutional because it included historic documents.

Louisville is home to the Southern Baptist Theological Seminary and it was the venue for the religious right's first "Justice Sunday" telethon, an event intended to intimidate judges in the wake of judicial decisions in the Terry Schiavo end-of-life case.

Grossman recalled that, in Louisville as a response to Justice Sunday, the Council of Churches and others organized a counter-rally on the same day. Unfortunately observant Jews could not be present as the Justice Sunday planned by the religious right fell during a Jewish Holiday, but in an act of solidarity, participants at the counter-rally were read a letter by Rabbi David Saperstein and rose in honor of the Jewish community. "It was very heartening," he said.

Governor's response awaited
Although they addressed their letter to the legislature, the Community Relations Council also sent it to Governor Ernie Fletcher. The Courier-Journal quoted Fletcher's spokesman saying "we are working on an appropriate response."

But Grossman said that, to his knowledge, the governor had not yet responded. The governor signed the bill on March 24th.

Despite the official silence, Grossman said, the letter has generated "nothing but positive comments." He expressed hope that the Louisville community's public stand "will encourage other communities to speak up. When communities speak in a positive way, much can be accomplished"