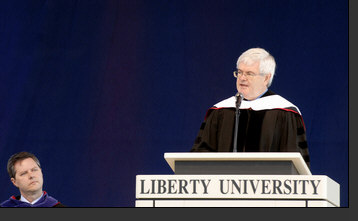 Following a May 19th commencement address at Liberty University that was part paean to the Christian school's deceased founder Jerry Falwell and partly an argument that the US was founded on religious tenets, former House Speaker Newt Gingrich said that the opportunity to "covert all America" survives Falwell.

At a news conference following the commencement, Gingrich paid tribute to Falwell's legacy, saying: ''Anybody on the Left who hopes that when people like Reverend Falwell disappear, that the opportunity to convert all of America has gone with them, fundamentally misunderstands why institutions like this were created.''

Gingrich is frequently mentioned as a contender for the Republican presidential nomination. Both the Washington Post and the Associated Press reported his statement about converting "all America." The AP report was published widely. But there's been little discussion of or comment on his remark.

We called Tyler and emailed him these questions. He did not respond.

Even without the conversion statement, Gingrich's commencement address should have been enough to raise eyebrows. In addition to his widely quoted (albeit unremarked) exhortation to confront "the growing culture of radical secularism," he also said:

When our Declaration of Independence asserts “We hold these truths to be self-evident, that all men are created equal, that they are endowed by their Creator with certain unalienable Rights, that among these are Life, Liberty and the pursuit of Happiness”, it makes some key assumptions.

It assumes that God is sovereign over the universe.

It assumes that God created man.

And Gingrich portrayed President Franklin Delano Roosevelt as a somewhat fundamentalist Christian: "FDR, the greatest Democratic President of the 20th century, believed in good and evil and believed his generation faced a war between Christianity and paganism," said Gingrich.

At another point the former Speaker stated:

The American [as opposed to the "Islamist," whom Gingrich castigated in the preceding paragraph] believes that all men and women —all—have equal rights, because that is the will of the Almighty and it is God that endows them. Indeed, we believe that no person stamped in the Divine image and likeness was sent into the world to be trodden on, degraded, and imbruted by its fellows.

Robert Parham, director of the Baptist Center for Ethics in Nashville, called Gingrich's conflation of the Declaration of Independence and the Bible an inauthentic civil religion.

No one else seems to have gotten very excited about the former Speaker's statements.