Pentagon allowed video for Christian Embassy to be shot on premises

The Military Religious Freedom Foundation (MRFF) brought the video to public attention and the Washington Post broke the story.

"This video contains some of the most blatant and egregious violations of both the Constitution and military regulations I have ever seen," said Mikey Weinstein, MRFFs president and founder. "It is truly astonishing that senior military officials have the impudence to appear in their official capacity discussing their desire to proselytize Christianity to fellow military personnel during the duty day and in the offices of the Pentagon itself."

In a recorded conversation with JewsOnFirst yesterday, just after news broke about the video, Rabbi Bruce Kahn, who served as an active and reserve Navy chaplain for 32 years, said that most chaplains, including evangelical Christian chaplains, oppose proselytizing in the ranks. Kahn calls such proselytizing demeaning. "It says [those serving in the military] are not adequate to make their own religious decisions without coercion," he said.

The MRFF issued a report calling on the Pentagon's Inspector General to investigate.

One of the officers in the video, Major General Jack Catton, pictured at right, sent an email from his official address last spring seeking campaign contributions for a "Christian" candidate for Congress. 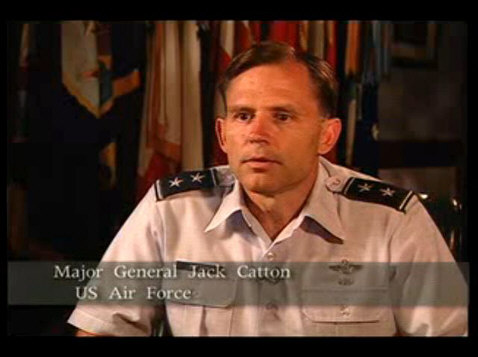 Also in the video, a Pentagon chaplain with the rank of colonel, Ralph Benson, says: "Christian Embassy is a blessing to the Washington area, a blessing to our capital; it’s a blessing to our country. They are interceding on behalf of people all over the United States, talking to ambassadors, talking to people in the Congress, in the Senate, talking to people in the Pentagon, and being able to share the message of Jesus Christ in a very very important time in our world is winning a world wide war on terrorism. What more do we need than Christian people leading us and guiding us, so, they’re needed in this hour."

Several days after news broke about its video, the Christian Embassy removed it from its site. JewsOnFirst posted a full copy (above). According to news reports, the video was made in 2001. 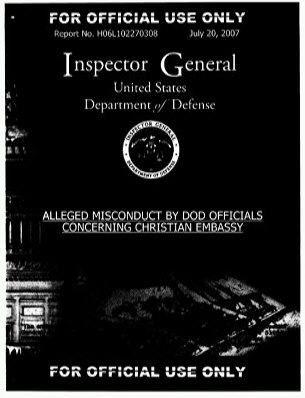 In a report released last week, the Defense Department's inspector general found that seven military officers, among them four generals, acted inappropriately when they participated in uniform in a promotional video for a conservative Christian evangelical organization, the Christian Embassy.

The Christian Embassy proselytizes to high-ranking military and civilian officials. According to the I.G. report, the organization, which has ties to the right-wing Campus Crusade for Christ, used the video for fundraising.

The report identified a since-retired Pentagon chaplain as having obtained permission for the filming with a misleading description of its duration and purpose.

Mikey Weinstein, president of the Military Religious Freedom Foundation, exposed the existence of the video last winter and demanded the investigation. That prompted the Christian Embassy to remove the video from its website. JewsOnFirst then posted the video, which has been viewed by many thousands of people.

Last week's I.G. report also confirmed earlier reports that the Christian Embassy has had free access to the Pentagon since 1978. Many of the officers participating in the video told the Inspector General that they believed it was a quasi-official part of the Pentagon. The I.G. recommended that the organization's officials be issued more restrictive passes.