Rabbi James Rudin
The Baptizing of America:
The Religious Right's Plans for the Rest of Us
328 Pages, Thunder's Mouth Press, 2006, $25

For Jews, a central proposition about America is: America is different. Jews took heart that, in the Declaration of Independence, the Constitution and each of its subsequent amendments -- especially the first and the fourteenth -- the United States was distinguishing itself from old Europe by establishing the separation of church and state. This created a special independent status for all religions, including Judaism. Now, though, Rabbi James Rudin warns in his new book, The Baptizing of America: The Religious Right's Plans for the Rest of Us, all of that is about to end.

Rudin writes: "I am convinced that despite the large U.S. population, the religious diversity, and the Constitutional and judicial guarantees of church-state separation, the campaign to permanently transform America into a faith-based nation where one particular form of Christianity is legally dominant over all other religious communities constitutes a clear and present danger."

Rudin lays out the threats to freedom, pluralism, and religious expression by enumerating "rooms" that he perceives to be falling under the control of the religious right. Those rooms include: the bedroom, where the religious right is attacking homosexual rights and a woman's right to choose; the schoolroom, where fundamentalists are imposing "intelligent design," fundamentalist bible lessons, and prayer; the hospital and medical laboratory, where zealots are interfering in end-of-life decisions, ending access to abortion, and blocking stem-cell research; the courtroom, scene of a Christocratic takeover of the judiciary; the newsroom, with its thousands of Christian broadcasts, most notably Pat Robertson's 700 Club; the public rooms, where the religious right is waging the "war" against the war on Christmas and imposing sectarian public prayer.

Unfortunately when Rudin ends in the workroom, telling us of diminishing protection against unwanted religious encroachment, he leaves us with few suggestions for responding to Christianization.

Rudin dubs the Christianizers "Christocrats", a term coined by Declaration of Independence signer Dr. Benjamin Rush to reflect the dashed aspiration of some of the founders for a Christian nation. One such Christocrat leader, Rev. Rod Parsley, heads the $40 million dollar World Harvest Church in Ohio and related non-profit operations. He was a leader of the "Ohio for Jesus" Christian voter registration drives that are credited with helping win the state for Bush in 2004. Rudin notes Parsley's belief that many clergy have yielded to secular intimidation and the "suppression of the church by the state." 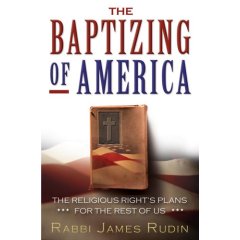 Rudin has a keen appreciation of the religious history of the United States, plus an insider perspective developed over thirty years of interreligious relations work for the American Jewish Committee. These credentials give weight to his warnings.

He speaks as well from his experience as a youth in 1940s Baptist-dominated Virginia and of World War II,when, for Jews the demons of intolerance were defeated in Europe and at home. The United States' key role during the war and the emergence of a secular independent Jewish state in Israel meant that the Jewish people were no longer in an "Exile" of shame and powerlessness. The world had at last learned its historic lessons from this most horrific of a millennia of European religious persecutions. Had it not?

For many Americans, especially American Jews and many of their liberal rabbis, still moored in that sense of safety, The Baptizing of America will come as a shock. How many of them have begun to notice what Rudin calls the "specter of our nation ruled by the extreme Christian right, [that] would make the United States a 'Christian nation' where … God's law supersedes all human law -- including the Constitution?"