The growing power of fundamentalist evangelical Christianity in the U.S. military

This article was commissioned and posted by Religion Dispatches, which has generously permitted us to repost it here. 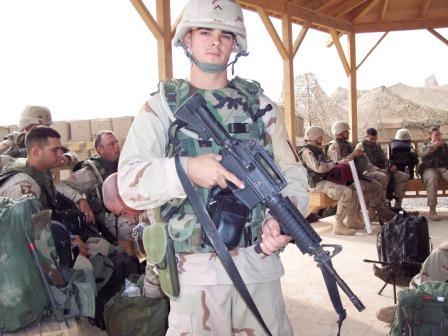 In a lawsuit filed against the Department of Defense and his commanding officer, Army Specialist Jeremy Hall alleges that Maj. Freddy J. Welborn broke up an atheists’ meeting Hall organized in Iraq, exclaiming: “People like you are not holding up the Constitution and are going against what the founding fathers, who were Christians, wanted for America!” In an interview with RD last week, Hall said that he and another Army specialist attending the meeting were forced to stand at attention before Welborn and submit to his authority, saying: “‘Yes sir, I see where you’re coming from, yes sir I see what you mean, this that and the other.” The encounter with Welborn, Hall continued, forced him “to totally lie. My integrity was taken from me. My pride. Everything was stripped from me when I had to say, ‘Yes sir,’ and shake his hand.”

Maj. Welborn’s tirade notwithstanding, the Constitution’s First Amendment forbids the establishment of an official religion. In practice, however, according to Hall, fundamentalist evangelical Christianity pervaded his combat experience in Iraq. Before seeing any combat, his unit was lined up and a chaplain handed each soldier a New Testament. When a bullet hit the shield on the turret in which he was riding, leaving him “as scared as I’ve ever been,” the convoy stopped, “and the first thing I was asked was ‘Hey, Hall. Do you believe in Jesus now?’ And not ‘hey are you okay?’ Or ‘what happened?’ or anything like that, just immediately my eternal soul was in question; my religious beliefs were automatically brought into question as a test or as a means to gauge me, all the time.“ After this particular episode Hall replied, “’No but I believe in ballistic glass.’ And I knocked on the shield which had just saved me.”

Potential for fascism?
In American Fascists, author Chris Hedges warns of the growing power of fundamentalist Christian evangelicals in the US military, noting that the Christian right sees the military as a key target. Their “successful politicization of the military would signal the end of our democracy,” wrote Hedges, in an essay based on the book.

Is Hedges’ assessment overblown? A movement that does not proclaim its progress is hard to quantify. However, over the past several years, there has been mounting anecdotal evidence of an aggressively intolerant fundamentalist Christian religious culture spreading through the armed services. A particularly troubling aspect of this development is the seeming inability of civil libertarians in Congress to mitigate, much less to control this trend.

Some may challenge Hedges’ estimate that “radical Christians” hold half of the armed forces’ chaplaincies. A New York Times investigation in 2005 determined that the numbers of evangelical and Pentecostal chaplains in the Air Force had grown while, perhaps unsurprisingly, the number of mainline Christian and Roman Catholic chaplains had declined. The other services did not provide information. The National Conference on Ministry to the Armed Forces, which says its “members represent the total theological spectrum of faith organizations that make up the organized religious community of the United States,” did not respond to requests for comment.

Intolerance in the chaplains corps
Whatever their numerical breakdown, the chaplains corps of the armed services have been the subject of frequent reports of intolerance and insensitivity to minority religions. The 2005 New York Times report quoted the Air Force’s deputy chief of chaplains saying “We will not proselytize, but we reserve the right to evangelize the unchurched.” The Air Force subsequently disowned that policy. But a Pentagon investigation into complaints of religious intolerance and coercion at the US Air Force Academy found that chaplains and faculty had indeed evangelized cadets.

A wealth of detail about the situation at the Air Force Academy became available as a result of a lawsuit, and a subsequent book, by Jewish Academy graduate Mikey Weinstein. Information also came from one of the school’s chaplains, Capt. MeLinda Morton, who took steps to mitigate the religious intolerance she witnessed. The Academy removed Morton, a Lutheran minister, from her executive position, preventing her from participating in the Pentagon’s investigation of proselytizing at the school. Morton told The Lutheran that Gen. Charles Baldwin, then head of Air Force chaplains, “indicated his intention and desire to restructure the Air Force chaplaincy along unconstitutional lines... to have chaplains operate primarily out of denominational priorities and engage in proselytization.” Baldwin denied Morton's allegations.

The paucity of news about religious intolerance at the other service academies does not mean that a culture valuing pluralism prevails at those schools. Last fall, when the superintendent of the Naval Academy suspended a practice of dipping the flag before the altar during Protestant worship services because the practice was not observed elsewhere in the Navy, an uproar from congregants and alumni forced reinstatement of the practice, according to the New York Times.

Thousands of complaints
As Jeremy Hall’s experience suggests, chaplains are by no means the only source of religious coercion in the military. Mikey Weinstein, whose Military Religious Freedom Foundation is representing Hall and who took part in the interview, said that the MRFF has received over 8,000 complaints of religious coercion from all the military services (most of them from Christians). In late May a report from Iraq told of US soldiers giving out coins with Christian messages to the Iraqis who passed through their checkpoints.

Over the past several years, as the widespread nature of the problem has come to public attention, some particularly egregious reports have surfaced of religious line-crossing by officers that reaches the services’ top echelons—and into the Pentagon itself. In late 2006 the MRFF released a promotional video shot inside the Pentagon by the right-wing evangelical Christian Embassy, featuring high-ranking officers in uniform. A subsequent investigation by the Pentagon’s Inspector General found that not only had the officers had acted inappropriately, but that the Christian Embassy, an organization affiliated with Campus Crusade for Christ that itself proselytizes to high-ranking government officials, had its own office in the Pentagon and free run of the building. One of the officers in the video, Maj. Gen. Robert L. Caslen Jr., subsequently served as commander of cadets at West Point and was recently named to command the 25th Infantry Division in Hawaii.

Congress obliges
In 2007 the Army and Air Force lent official sponsorship to a right-wing Christian evangelical Memorial Day “Salute to the Troops” at Stone Mountain Park near Atlanta. A last-minute protest by Americans United for Separation of Church and State and the MRFF forced the services to drop their sponsorship and greatly reduce flyovers and other military participation in the event. The Congress, which could restrain the Christian right’s activities in the military, has, instead, cleared all possible impediments. In 2006 the Christian right and its allies in Congress put language in a major defense authorization bill to explicitly permit chaplains throughout the military to pray “according to the dictates of their own consciences, except as must be limited by military necessity.” This was a well understood euphemistic echo of the Christian right’s core demand for chaplains to pray in the name of Jesus at command events as well as during the worship services they lead.

Obligingly, the House passed the language by a vote of 396 to 31. That vote followed the defeat in the Armed Services Committee of a Democratic effort to moderate the language. Republicans on the committee voted down Democrat Steve Israel’s amendment, which read: “... chaplains shall demonstrate sensitivity, respect and tolerance for all faiths present on each occasion at which prayers are offered.”

The chaplain language held up the main bill for several weeks. Finally, when the Senate would not accept the measure, it was removed from the bill altogether. Instead, Congress simply rescinded the Air Force and Navy chaplain guidelines altogether. The guidelines had been revised in previous months, incorporating complaints from both the Christian right and First Amendment supporters. Hearings on the guidelines, which Sen. John Warner (R-Virginia) suggested be held in the next Congress have not been held. Nor has the House Armed Services Committee held hearings on the Christian Embassy video, which were requested by the Anti-Defamation League and the MRFF. A spokesperson for the House committee said no hearings have been or would be held in the current Congress, while an aide to one Senate Committee member put it succinctly: “No hearings have been held to this point, and none are scheduled.”

A militant association representing evangelical military chaplains, the Greenville, South Carolina-based International Conference of Evangelical Chaplain Endorsers, has vigorously pushed to overturn restrictions on sectarian prayer at mandatory gatherings. Also pressing for looser restrictions are several of the biggest religious right organizations. In early 2006, the National Association of Evangelicals intervened on the side of the Air Force in the lawsuit that Mikey Weinstein filed in an effort to change the Air Force’s religion policy. (A judge subsequently dismissed the case.)

In his book You, the Warrior Leader, former Southern Baptist Convention President Bobby Welch recognizes members of these groups, writing that, “along with other Christian soldiers, [they] are united throughout the branches of the military for fellowship, outreach, equipping, and ministry. Their vision is to exercise biblical leadership that will be used [by] God to bring about a spiritually transformed military.”

The military’s hierarchical structure facilitates that project. As Army Specialist Jeremy Hall noted in the interview, it is difficult to resist “non-commissioned officers who outrank you constantly pressuring you to espouse a certain belief.” Hall said he heard a chaplain ask, before a ceremony, “’Hey, who here is Catholic—if you’re willing to admit it?’” No one “admitted it,” which Hall attributed to a need to “go with the flow” because “the military owns your behind.”

by Jane Hunter, JewsOnFirst.org, May 2008

Army Specialist Jeremy Hall, an atheist, is suing the Department of Defense and his commanding officer in Iraq for inappropriately imposing fundamentalist Christianity on him. This interview was conducted in conjunction with a report that JewsOnFirst.org wrote for Religion Dispatches in June 2008. Also heard in the recording is Mikey Weinstein, president of the Military Religious Freedom Foundation, which is supporting Specialist Hall.