Editor's note: Some background for readers who may be unfamiliar with Rev. Hagee. He is the founder and head of Christians United for Israel (CUFI), a right-wing Christian organization that lobbies for support of Israel in the U.S. Congress. Hagee and CUFI are controversial for opposing any trading of land for peace by Israel. Hagee is also controversial for slurs against target=_blank>Catholicism (noted recently when he endorsed John McCain), Islam, gays — even Reform and Conservative Jews. Hagee/CUFI hold "Nights to Honor Israel" in cities around the country, usually at Christian churches. The "nights" feature donations to local Jewish federations. (The program that Robin Podolsky reports on below was not billed as a "Night to Honor Israel," but as a "dialogue.") Most Jewish organizations favor cooperating with CUFI.

On Tuesday, March 11, the Reverend John C. Hagee spoke as a guest at Stephen S. Wise, a Reform Temple in West Los Angeles—the first time, the Reverend said that he had spoken at a Reform Temple in more than 20 years. The event was billed as a ‘dialogue’ between Reverend Hagee and Rabbi David Woznica, and the format was that of a long interview in which Rabbi Woznica asked questions that Reverend Hagee answered. The audience had no opportunity to ask questions of its own.

When asked to identify himself theologically, Reverend Hagee said that he is Evangelical, which means that he “reads scripture” and then simply “does it.” He said that he is not fundamentalist, because he does not wish to be identified with the sort of people who handle snakes. (This was not the only time when Reverend Hagee appeared to cater to a prejudice that he expected his audience to share. At one point, he invited the mixed audience of Jews and evangelicals to commiserate with the difficulties of winning Texas “rednecks” to the task of combating anti-Semitism; he also described a rushed, hurried prayer as being like that of “a Presbyterian late for lunch.”) 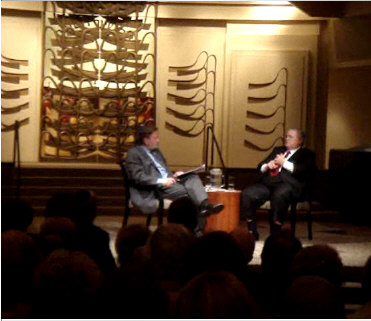 When Rabbi Woznica asked the Reverend if he was a literalist, he said that he was and that he did believe that the world was really created in six days and that Noah’s ark was real. On the other hand, in response to a follow-up question from Rabbi Woznica, Reverend Hagee said that he does not believe a Sabbath-breaker ought to be stoned to death, referring to Biblical laws as ‘word pictures’ that indicate ‘principles.’ Pressed further, Hagee said that he takes stories of miracles literally and that his belief in God as all-powerful and all-knowing has ‘never’ been shaken.

Blessings and curses in Deuteronomy
Rabbi Woznica pressed the point in reference to Reverend Hagee’s famous remark that Hurricane Katrina can be best understood as God’s punishment for sin, homosexuality in particular. Hagee didn’t answer directly but responded with a précis of the blessings and curses described in Deuteronomy as the recompense for obedience or sin. He then went on to say that when a tragedy occurs, “you don’t know that day if it is a tragedy,” re-telling the story of Joseph who thought he was having a bad day when his brothers sold him into slavery and who later realized that the series of events leading to his position of leadership in Egypt represented the work of God on behalf of his entire people.

Rabbi Woznica asked if, on the day that a tsunami wiped out thousands of people, we might not be justified in assuming that we were all having a bad day. The Reverend acknowledged that it would certainly feel bad at the time.

Then the tone of the conversation changed abruptly. Rabbi Woznica asked the Revered if we are always obliged “to forgive.” Hagee said that we are only obliged to forgive in response to a promise of changed behavior, because to forgive without a promise of different conduct is to “make the grace of God an accomplice to evil.” The Reverend went on to remind us of the story of Jesus and the adulterous woman—Jesus, whom Hagee described as a “Reform Rabbi” (!) rescued from the crowd “of Pharisees” about to stone her and told her to “go and sin no more.” The point being that the woman was forgiven, but not without conditions.

The recitation of this story in service of the Reverend Hagee’s theology of forgiveness crystallized what was intriguing and exasperating about the whole evening. As Rabbi Woznica remarked, this may have been the first time that any of the Jews in the audience had heard a Christian suggest that gratuitous forgiveness is not the absolute obligation of every victim—and certainly the first time that we had heard a conservative Christian acknowledge Jesus as a rabbi, much less a Reform one. On the other hand, Jesus’ ‘legalistic’ and bloodthirsty opponents were still characterized as Pharisees—those forerunners of the Rabbinic movement. It was an odd juxtaposition—on one hand, a clear attempt to win over the audience while slipping in a reference to an old canard: forgiving Jesus versus hateful and unforgiving proto-rabbis.

This was even odder following Hagee’s refusal to categorically take back his on-record assertion that a hurricane that wiped out thousands of lives might best be understood as Divine punishment and, therefore, as just.

Support of Israel?
Reverend Hagee said that he wished the audience to understand that his work “in support of Israel” was not aimed at conversion of Jews to Christianity. He then expressed irritation at being asked if his work with Christians United For Israel (CUFI, which Hagee heads) had to do with the Apocalypse. He said, “Only a moron would ask a question like that.”

Rabbi Woznica smiled and said that the question had been “on his list.” However, perhaps because he was uncomfortable at the possibility of his guest calling him a moron or because he was distracted with other questions, he never returned to the issue again.

Therefore, the audience never got a chance to hear what the Reverend would have said if someone had asked him to explain his dismissal, in advance, of any discussion of the Apocalypse in the context of the discussion that followed.

At one point, Reverend Hagee said that, following the example of his father, also a minister, he regards the founding of the State of Israel to be the most important event of the 20th Century—because this ‘in-gathering’ is a necessary prelude to the rebuilding of the Temple, the battle of Armageddon and revelation of the Messiah, whom Hagee believes to be Jesus Christ. At the sight of the Messiah, the “remnant” of the Jews who would be left after the Armageddon struggle (Hagee coyly observed that while, remnant sounds bad, “we don’t actually know how big a remnant is”) would “weep at the sight of the one whose side they (!) had pierced.” This account is absolutely at odds with Hagee’s earlier statement that it is wrong to interpret the Christian Bible to suggest that the Jews killed Jesus, because that killing was actually a “Roman conspiracy.” Rabbi Woznica, doing his game best to follow the argument, did not interrupt to point out this inconsistency.

It is worth noting, in this context, that Hagee has made statements on the record claiming that a nuclear war between Israel and Iran would trigger the Armageddon war in which Russia will join with an Arab coalition against Israel. Surely this means that, like Hurricane Katrina or the perfidy of Joseph’s brothers, the coming of this terrible war in which many people, including Israelis would be killed would not actually be a bad day.

To this Reform audience, Hagee insisted that CUFI is a ‘one-issue’ organization that does nothing but “support Israel,” sending out lobbying brigades to Congress with focused talking points on that subject alone. But he was never asked how, in light of his belief that the War of Armageddon is necessary to the chain of events that will bring on the world to come, such a belief colors his notion of what “support” for Israel means. (The Rabbi admitted that he has not read Hagee's book, Jerusalem Countdown, and asked Reverend Hagee to send him a copy.)

To heighten the contradiction even further, Hagee averred that, while he does not believe that Israel ought to give up any territory it now controls (because of the Biblical mandate that “excludes Ishmael”), he would not “tell them they could not do that.” However, his lobbying efforts have been documented elsewhere as ‘supportive’ of the most war-mongering right wing elements in Israeli society.

Christian right leaders on CUFI's board
Hagee also has, on the Board of CUFI, assembled the most socially right wing Christian ministers, who are working, actively, to re-brand the United States as a Christian nation. Hagee was never asked how, if he believes that the removal of Jews from the United States to Israel is an eschatological necessity and, if he is working to turn our constitutional democracy into a Christian nation, what he thinks the role of Jews as US citizens ought to be.

Hagee was warmly received by this Reform Jewish audience and given several standing ovations. It may be that this audience had never heard a Christian preacher acknowledge the several truths that Hagee did address in his remarks.

He admitted that the Crusaders were “liars, murderers, rapists and thieves;” that Jews were tortured during the Inquisition; that the perpetrators of the Holocaust were, for the most part “baptized Christians in good standing within their congregations.” He admitted the anti-Jewish screed of Martin Luther. (And, no, he was never asked to explain his remark that the Catholic Church is a “whore.”) Hagee said it was time that Christians acknowledged the anti-Judaism that has run through Christian history and “asked forgiveness.”

All this, along with the Reverend’s warm, personable attitude, proved utterly seductive to this crowd, who seemed unfamiliar with Hagee’s other side: the side that has every reason to help provoke a state of constant war between Israel and her neighbors in order to bring about the Messianic scenario in which he believes; the side that attacks Catholicism in such terms as would draw blanket condemnation if they were ever used to describe Judaism; the side that flatly opposes separation of church and state; a woman’s right to choose and gay rights—all principles that the Reform movement has endorsed.