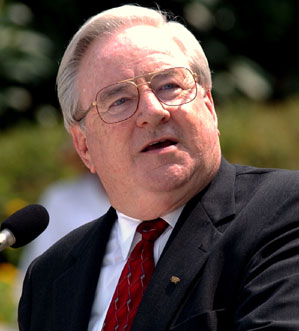 The Rev. Jerry Falwell, one of Israel's main right-wing evangelical Christian allies, quickly denied a Jerusalem Post report that he no longer believes that Jews must convert to Christianity to be "saved." The Post's sources, televangelist John Hagee and Rabbi Aryeh Scheinberg of Congregation Rodfei Sholom, both of San Antonio, also said the Post was mistaken. The mistake turned on some fine points of theology, but it revealed some interesting things about how Jews and right-wing evangelicals regard each other.

Sources and context
Hagee and Scheinberg were the Post's sources for the recent report about Falwell--according to the Post. They subsequently told the San Antonio Express-News that they were actually talking about proselytizing Jews — not the putative need to convert them. The context, taking a further step back, was that, under the leadership of Hagee, CUFI would not "witness" to Jews about Christianity.

For right-wing evangelical Christians, this is apparently a delicate issue. According to the Express-News, fellow Christians have accused Hagee of believing that Jews do not need conversion because Hagee has something called a "dual covenant theology." In a statement to the San Antonio paper, Hagee denied holding such a theology.

Falwell made his denials to the Baptist Press and WorldNetDaily,a right-wing website. Baptist Press reported that " Rabbi Aryeh Sheinberg [sic] of Texas is the source" of the Post's story. Actually the Post named both Scheinberg and Hagee as its sources, though it quotes Scheinberg extensively.

The Falwell incident comes on the heels of Pat Robertson's declaration that Prime Minister Ariel Sharon's stroke was God's punishment for the removal of Jewish settlements from Gaza. That may cost Robertson his business interest in a Christian theme park in Israel. Falwell was one of the main trend-setters for right-wing Christian involvement with Israel in the 1970s and has been, post-Robertson, seen as one of the more tactful Christians. It is not clear if his unsubstantiated improvement will cost him with Israelis. Both he and Hagee express support for continuing the Israeli occupation of Palestinian lands.

The conversion issue is one of the most uncomfortable (indeed, unmentionable) aspects of the cozy relationship between Israel and American Christian Zionists, a mainstay of Israel's tourism industry and an important political ally. Even so, none of this would be that important, if it were not for the fact that a majority of major Jewish organizations so value Christian Zionist groups' support for Israel that they have shrunk from public opposition to right-wing evangelical Christian groups' domestic agenda.

Indeed, there is overlap between the two groups. For instance, Pastor Rod Parsley is a supporter of CUFI. A short essay by another Texan, Rabbi Stuart Federow of Houston, shows how uncomfortable the nexus of the Zionist and theocrat types of Christians can be.