Washington DC Even though it was closed to the news media, a "Talking Points" briefing at the Christians United for Israel conference this afternoon lacked the characteristic apocalytpic talk about Iran sparking the battle of Armageddon. Predictions that Israel and the Jews will figure prominently in an end-times scenario culminating with the return of Jesus have been staples of CUFI's leader, televangelist John Hagee.

CUFI, the nation's newest and most active Christian Zionist group, brought several thousand people to its second annual lobbying conference this week. Almost one thousand people filled the room at a hotel across from the National Zoo for the Talking Points briefing; an announcement suggested that more people were in a second room. Presidential candidate John McCain made an unscheduled speech at the start of the Talking Points session (see sidebar).

Meeting decorum stressed
Talking Points briefer and CUFI Executive Director David Brog said that lobbying delegations should mention their "biblically based" support for Israel when they met with their their representatives in Congress on Wednesday, but the presentations they were instructed to make, laid out in large print across four pages, were strictly political and somewhat measured in their tone.

Brog's main focus was decorum -- coaching attendees on how to behave during their meetings. He repeatedly emphasized building long-term relationships with legislators and their staffers.

Iran was front and center.

Tell your Senators and Congressmen that nothing should be taken off the table at this point. Iran needs to understand that Congress is open to military action if our continued economic and diplomatic pressure fails to get them to reverse course.

The document also notes that "Senator Joseph Lieberman recently stated on national television that 'we've got to be prepared to take agressive military action against the Iranians to stop them from killing Americans in Iraq.'"

Brog noted that Lieberman, who spoke at a CUFI dinner Monday night and got a "truly warm CUFI welcome" -- is "out all alone on that limb." Brog added that, after "the annointing we gave to Sen. Lieberman last night, he left here stronger."

The talking points briefing also downplayed another CUFI theme -- extreme anti-Muslim bigotry -- that has caused discomfort among many Jews. Brog made only one reference to "genocidal Islamo-fascism" related to Sudan.

On Hezbollah, Brog asserted that the Lebanese organization has never complied with the UN resolution that ended last year's war, while Israel has fully complied. He said that Syria and Iran have completely rearmed Hezbollah and another war is inevitable.

The talking points document instructs attendees to lobby for a stronger UN resolution when it is renewed.

On military aid to Israel, Brog explained that Republicans had killed a bill containing the military aid because of "abortion language" inserted by Democrats. He also said, somewhat cryptically, that funding in the foreign aid bill for "condoms and birth control frees up money to pursue other agendas."

Audience passion
That was the second reminder that, although CUFI calls itself a "single-issue" organization, it comes wrapped in a Christian nationalist package. Its activists clapped and screamed when Hagee said John McCain "has a 24-year track record of being pro-life."

The attendees had other opportunities to express the powerful emotions underlying their activism during Sen. McCain's speech, and when Hagee took the stage to introduce him before the Talking Points briefing.

Hagee was greeted with a spontaneous standing ovation. 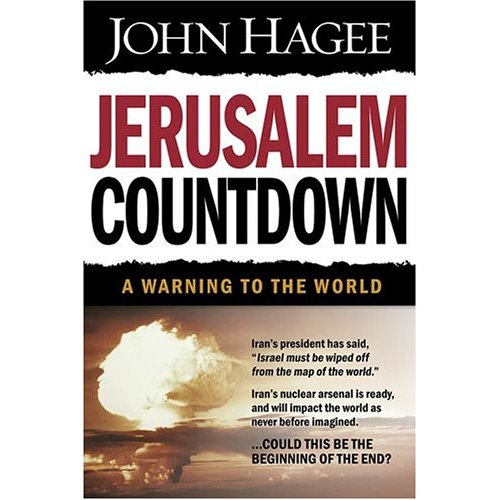 Before introducing McCain, Hagee read a statement "authorized" by CUFI's board deploring President Bush's Middle East peace initiative, announced on Monday. He read: "It is unfortunate that the President used the word "occupation" a term that is often used by Israel's enemies." The statement also admonished: "while many people of good will thought that trading land for peace would work, every concession by Israel has lead to advance terrorism."

In previous statements and interviews, Hagee has argued that the Bible demands that Israel maintain possession of all the territories it has seized in war.

The Forward reports that CUFI does not lobby on Israeli-Palestinian peace-making, since its position is at odds with the current position of Israel's lobby AIPAC.

In introducing McCain, Hagee said: "it has been my privilege to talk with McCain on several occasions...and I can tell you that he is solidly pro-Israel." That brought screams and applause from the audience.

Arizona Sen. John McCain once shunned the religious right as "intolerant." These days, though, on the heels of a dismal fundraising quarter, McCain appears to be swinging into campaign overdrive in his quest for the Republican presidential nomination. His name did not appear in the CUFI program and he was shoe-horned into a Talking Points briefing.

A swarm of reporters that is following McCain around waiting for his campaign to implode crowded into the room.

McCain hit all the right notes for the CUFI audience. They applauded his support for the war in Iraq, which he described as "mismanaged" -- and which is sinking his campaign.

As he began, he said with the merest hint of a smile that it was "hard doing the Lord's work in the city of Satan."

McCain told the CUFI activists that Israel has never been so needful of their help and prayers. "God bless you for your commitment."

In closing, McCain, evidently assuming his audience was exclusively Christian, made a religious statement. It came at the end of a story he told about his time as a prisoner of war in North Vietnam.

He described how a guard once secretly loosened a rope holding him in a doubled-over position, then, at the end of his guard shift, tightened it again. Some months later, on Christmas day, McCain said, the guard approached him and quietly drew a cross in the dirt with his foot. (The audience sighed loudly.)

From this, McCain said, he drew the lesson: "No matter how diificult the times are, and these are difficult times ... there's always someone who's going to come along and draw a cross on the ground."