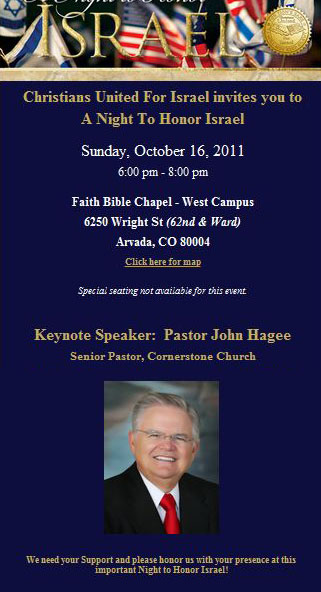 I decided to attend this event, held October 16th, at Faith Bible Chapel (FBC) as a Jewish "witness," kippah attached. I arrived early enough at the church to greet demonstrators and then entered into the atrium area where merchandise from Israel and Christians United for Israel (CUFI) was being sold.

For reference, CUFI calls itself the largest pro-Israel grassroots effort in the country. It proudly leads the Christian Zionist movement here. If you don't know much about them, talk to a friend who does or see our page on Christian Zionism. Arvada, where FBC is located, is just outside Denver.

First, I want to shout out a big SHALOM to the demonstrators from Project Strait Gate, Friends of Sabeel, and Jewish Voice for Peace. Your courage and good humor in engaging the few who talked with (and those who cursed) you is a model of non-violence.*

The crowd in the FBC atrium and during the program was very friendly to me and my kippah. I engaged in many respectful conversations. The FBC's main chapel holds around 3,000 people and I would estimate that 2,900 were actually in attendance. There were some empty seats, but not many. Between dignitaries, attendees and a rough count of kippot I estimate no more than 100 Jews were in attendance.

Congregation sang in Hebrew
While getting seated and during its first part, the program featured a significant amount of live music and dancing based on Jewish-Israeli themes (and stereotypes). I was surprised at how well the congregation sang Hebrew lyrics and the enthusiasm they had for the Israeli music. It was easy for me to join in with that choir. The singing and dancing was performed by a mix of professional and FBC young people. It was well staged and choreographed and got the congregation happy for Israel. Early on, a man by the name of Frank Buck blew the shofar.

One part of the entertainment included the showing of a multimedia presentation, Against All Odds. It vividly describes the tribulations of the Jews and the wars of Israel from the mid-19th century to the present. While Nazis and Russians were the highlighted persecutors in the 19th early 20th centuries, their Christian religion wasn't mentioned. Actually Muslims weren't mentioned either in the video, but it was clear that during and after the Israel's 1948 birth, the struggle has been exclusively with unmerciful Arabs and Muslims (in this century called "terrorists" ). But "against all odds" and with the direct help of God, Israel and the Jews have triumphed and will survive in their ancient homeland.

There were more than six speakers, if you count George Morrison, the head pastor of FBC who introduced the program. The two people I wanted to listen to most closely were Rabbi Selwyn Franklin from the Orthodox congregation Beth HaMedrosh Hagodol-Beth Joseph (BMH-BJ) in Denver and Pastor John Hagee of the Cornerstone Church in San Antonio, Texas. But it was noteworthy that the program included the Hispanic Outreach coordinator for CUFI, Carlos Ortiz, and the brand new Israel Consul General of Los Angeles, David Siegel.

Rabbi Franklin
Rabbi Franklin's address followed the showing of Against All Odds. He began by remembering his niece who died 10 years ago at age 22 from being near a "homicide" bomber in Israel. He articulated the standard biblical justification for Israel as the home of the Jewish people. His message became more impassioned as he enumerated Jewish tribulations. He pleaded for a Jewish state of Israel where all inhabitants had rights but where Jews would have special rights and protections. Rabbi Franklin implied that this would mirror "Islamic states" such as Saudi Arabia, and the Islamic Republic of Iran, only it would be more democratic. He also spoke of the Purim story as an appropriate fate for the current Iranian government, should it threaten Israel.

Rabbi Franklin acknowledged CUFI as the "true righteous gentiles." At the end he worked himself into an emotional high, calling out to the congregation "Our Father in Heaven Lives, Am Yisrael Chai" (the People of Israel live). He received an enthusiastic standing ovation. I felt compelled to stand then as well, although I didn't stand up every time the congregation did.

Rev. Hagee's keynote speech
Pastor Hagee was the keynote speaker. While he's often on TV, this was the first time I actually listened from start to finish. What he said was remarkable! He spent much of his time criticizing President Barack Obama and his administration for not being supportive of -- and indeed working against -- Israel. Note: this followed Consul General David Siegel's declaration that "America is now and always has been a firm, reliable and faithful friend" of Israel.

Here are some more quotes from Rev. Hagee's presentation:

"Barack Obama has no right to tell the Jews where they can build."

"He (Obama) has no right to divide Jerusalem."

"Israel is not occupying anything; it owns that land as given by God 4,000 years ago."

By the way, I looked up the original deed in Genesis 15:18. God gives Abram all the land from "the Egyptian River (Nile) to the great river, the river Euphrates," up into the heart of present day Iraq. Fortunately for its neighbors, the maps of Israel shown on the screens at FBC include only the area formerly known as Palestine.

Hagee told us that the 1948 partition was a "stupid UN idea" and that only Israel can determine its own borders. He said that the United States of America must support Israel in this struggle or we lose our current status in God's eyes as an "exceptional" nation. He predicts that if we support any other solution to the conflict we will suffer. He specifically blamed the "mental midgets of the liberal media" *audience snicker* for promoting anything other than a Jewish state in the entire area from the Mediterranean to the Jordan River.

In order for there to be true peace, said Hagee, the world -- and especially Muslims -- must acknowledge the Jewish State of Israel. Then, with God's help and the friendship of the United States, it will live in peace with its neighbors. "Israel is doing our job" in the Middle East and America must not ask Israel to give up land for peace. That approach has already been tried and only leads to more terrorism, he said.

Finally, the Pastor preached, "The best way to achieve 'genuine peace' is to defund the UN, cut off all Palestinian aid, and demonstrate a strong deterrence to Iran and all other radical Islamists who threaten our best friends in Israel, and us next."

I didn't stand up for the wild congregational response to Hagee, and I didn't attend the reception.

One quick note: This year the Night to Honor Israel celebration took place at the same time Gilad Shalit was being released. I commend the FBC for acknowledging that event and keeping it tasteful.

Collection benefits settlement project
The "good news" for Pastors Hagee and Morrison is that now Jews and Christians are uniting, through CUFI and friends like Allied Jewish Federation of Colorado (AJF-CO) and Rabbi Franklin of BMH-BJ, to "defend Israel" against its many foes domestic here, domestic there and foreign.

CUFI says it has 850,000 "members." I estimated from observing typical contributions when the offering plates were passed around that they got $20,000 or more from the congregation. I'm also assuming that they received significant additional funds from their reception after the general services. According to Pastor Morrison these funds are specifically going to:

I am very disappointed by the overt political message that Pastor Hagee gave and how warmly that message was received. But I'm even more disturbed by a whole-hearted "mainstream" Jewish association with this right-wing, homophobic very rich church and organization. While Pastor Hagee's homophobia was not on display at this event (thankfully), he does not mince his words, thoughts, and curses regarding same sex relationships. Nevertheless, the AJF-CO "take" from this event was somewhere between $5,000 and $20,000. Whatever good comes from this money, it's a paltry sell out to true justice and peace for the people who live in that land.

The CUFI website currently shows close to 390,000 signers for this statement.

Addendum
I just finished listening to a phone conference with Jerusalem lawyer Daniel Seidemann, sponsored by Americans for Peace Now. He reiterated that the threat of Christian Zionists, messianic settlers and an Israeli government that lavishly finances a deliberate balkanization of East Jerusalem spells the death of the viable two-state solution. In turn, this will increase Israeli and US isolation in our world and will extend and deepen the conflict here and there.

*Last year, in response to protests from Jewish organizations and individuals, the Denver Allied Jewish Federation withdrew an invitation to Pastor Hagee to keynote a dinner. See our report.

Les Canges is a Denver, Colorado native who grew up Jewish, got a very good education at the University of Denver and the University of Colorado and had a distinguished human resources career with the State of Colorado. He reclaimed his Judaism in 2006 in order to repair the harm done by the Israeli cluster bombs in the second Lebanon war. He supports peace, justice and a multicultural solution to the conflict which ensures the rights of all who live in that land.