Cincinnati Jews and Christians "Stand Together" in Support of Israel

In November of last year, Cincinnati Jews and Christians sponsored an event to bring together Christians and Jewish supporters of Israel. The event was called "Standing Together: An Evening of Christian-Jewish Support for Israel." The focus was on why the Jewish community should welcome Christian support. 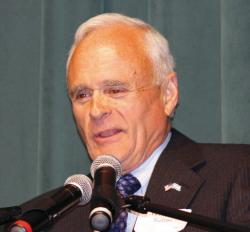 The event featured two speakers from The Friends of Israel Gospel Ministry (FOIGM) and the Consul General of Israel to the Mid-Atlantic Region in the United States, the Honorable Daniel Kutner. Master of Ceremonies was Brian Jaffee, the then director of Cincinnati's Jewish Community Relations Council of the Jewish Federation of Cincinnati; he has since become the executive director of The Jewish Foundation of Cincinnati.

In attendance were approximately 80 Jews, according to organizers - most from Jewish organizations - and perhaps twice as many Christians. Organizers explained that attendance was as anticipated.

The Christian Speakers
The first speaker was Reverend William Sutter, Executive Director of FOIGM. Sutter, an accomplished speaker, is a graduate of the University of Pennsylvania and holds graduate degrees in both divinity and business. He traces his support for Israel and opposition to anti-Semitism to his upbringing. As the executive director of a global organization with some 250,000 members, Sutter is a well-known figure among Christians who support Israel.

In his well-received speech, Sutter began with a brief history of his organization, formed in 1938 by Christians to minister to Europe's beleaguered Jewish population. Then he focused on how his organization seeks nothing from the Jewish People. In particular, Sutter sought to persuade the audience that his organization does not seek to convert Jews or to encourage them to move to Israel to hasten "the end."*

Perhaps more importantly, Sutter disavowed any support for the replacement theology that some Christian groups that publicly support Jews endorse. In this theology, the Jews are replaced by Christians for the position as God's chosen people, and Israel is replaced by the Church.

Sutter and his organization support a conservative reading of the Bible. According to a piece on his organization's website written by the editor of FOIGM's magazine, this level of interpretation includes the belief, that women should "...submit to their husbands" (Eph.5:22) and husbands should assume their responsibility as leaders...."

Christianity's Jewish roots are the focus of FOIGM's devotion to Israel and the Jewish People, Sutter emphasized. The positions articulated by Sutter in his speech are consistent with comments authored by him and his colleagues on his organization's website, and nothing to the contrary appeared on an internet search for news and opinion pieces.

After Sutter, Jaffee introduced the next speaker, FOIGM's Rev. Johnessee.

In his introduction Jaffee, whose wife is a rabbi, spoke in decidedly diplomatic terms about being slow to trust Johnessees motives. The courtship began with a few meetings, then lunches and was consummated with Shabbat dinners at his home with his wife.

After the two men embraced on stage, Johnessee spoke briefly about his relationship with Jaffee and his work in outreach for his organization.

Consul General of Israel Speaks
The third and final speaker was Consul General Kutner. Much of his speech was about how Israel welcomes the support of Christians.

After explaining that much of the original planning for the Israel Defense Forces was done by a brilliant Christian military expert, Kutner spoke of how Israel welcomes Christians and their support. Israel needs all the help it can get, said Kutner. Christian support is most welcome.

As the birthplace of Christianity, Israel offers much enchantment for Christians as well as for Jews. Illustrating this point, Kutner told the audience how Neal Armstrong, the first man to walk on the moon, responded to the south part of the Temple Mount. For Armstrong, experiencing the very place and the very stones that Jesus tread, Kutner told the audience, supplanted the famous astronauts moonwalk as the biggest most important - experience of his life.

The event ended with Jews and Christians rising to sing Hatikva, the national anthem of Israel.

According to the organizers, this was a one-time event. No further such events are planned, "... it is very possible that another event will be cosponsored in the future," explained Shep Englander, CEO of the Jewish Federation of Cincinnati.

*Editor's note: Israeli anti-missionary activist Rabbi Tovia Singer has claimed that the FOIGM is involved in effots to convert Jews to Christianity.