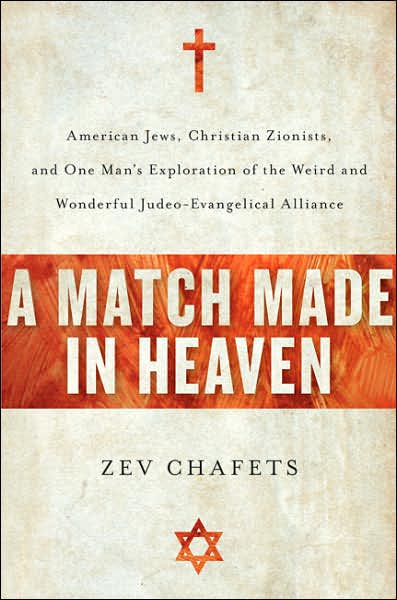 Zev Chafetz
A Match Made in Heaven: American Jews, Christian Zionists, and One Man's Exploration of the Weird and Wonderful Judeo-Evangelical Alliance
240 Pages, HarperCollins, $24.95

In this interview, focused on his book, A Match Made in Heaven, which extolls Christian Zionists, Gross asks Chafets he feels about having an alliance with Christian Zionist leader John Hagee, a pastor who said on Fresh Air last fall that Hurricane Katrina was God's punishment of New Orleans for a planned gay parade. Chafets brushed off the question, saying:

Well, look, one thing has nothing to do with the other as far as I'm concerned. You know, in a war, you take the allies that you have. Would I prefer to have other people as allies? Sure? Do I agree with Pastor Hagee on what happened in New Orleans? Absolutely not. Do I care what Pastor Hagee thinks about that subject? No, I don't. My concern is a central concern. There's a world war in which Jews happen to be topic number one or enemy number one for the Islamic world, and I am in favor of anybody whose ideology enables them to understand that the jihad against Christians and Jews waged by al-Qaeda or the doctrines of wiping Israel off the map, which are prevalent in Tehran, or the notion than the world is controlled by a Jewish conspiracy, which is in the Palestinian Hamas charter, that those things are a form of aggressive fascism, and people who understand that are on my side in this particular fight.

I'm sure that's true, and for those people for whom it's a major thing, it shouldn't be overlooked. During the 1930s, there were--and excuse me for going back to this but it's the relevant example. In the late 1930s, there were people who were opposed to Hitler but who didn't really see that that was the main problem. They were concerned with other issues.

Gross asks Chafets about where a peace agenda fits with the battle of Armageddon (according to Christian Zionist end-timers, the battle is a war in Israel presaging the return of Jesus). Chafets replies:

Well, look, I don't know what people are looking for, and I don't necessarily think that people who supposedly want peace are people who are acting in Israel's best interests all the time. Israel is engaged in a very long war, and it has been ever since it was founded, and you know, all of us want peace.... So the fact that somebody says that they're in favor of peace doesn't impress me very much at this point, and the fact that somebody is more interested in a Biblical scenario doesn't alarm me very much at this point either.

When Gross asked him about the possibility that Israel would bomb Iran's nuclear sites, Chafets had this to say:

You know, Israel does it as carefully as it can. But I think that it's just not realistic to expect, and I don't like invoking the Holocaust but it's an ever-present thought in the Israeli psyche, and it's unrealistic to expect six million Jews who are now living in the land of Israel to sit around waiting for the next Hitler to exterminate them. I don't think that's going to happen, and I think that if, you know, that if the results of that are sloppy, and they'll be sloppy for the entire world, not just for the Middle East, well, that's going to be a sloppy result.

To read the transcript of the interview (a PDF document), click here.