The Republican Jewish Coalition is responsible for a mailing received by Reform rabbis and other Jews that included a DVD of the controversial anti-Muslim film Obsession, JewsOnFirst.org has learned. At least part of the mailing was sent under the postal permit of Christians United for Israel, a leading Christian Zionist organization.

The DVD was packaged inside a book by David Brog (see scan below, at right), CUFI's executive director. The package also contained a letter by a former Israeli ambassador to Washington, endorsing Brog's book and calling on Jews to accept an alliance with Christian Zionists. 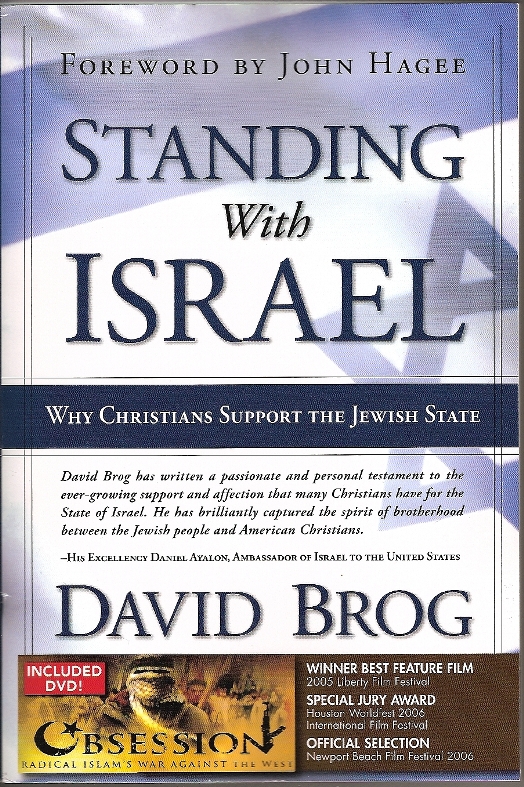 CUFI's media representative told JewsOnFirst.org that the package was "mailed out" by the Republican Jewish Coalition. The representative, Juda S. Engelmayer, was unable to specify a particular mailing list the coalition used, but said he believed the recipients came from "a combination of various lists."

Informal surveys by JewsOnFirst and others determined that the mailing was received by many rabbis, and also many members of the Jewish community.

A staffer at the Central Conference of American Rabbis, the organized rabbinate of Reform Judaism, said that the organization had neither made its list available for the mailing nor sent the package through its mailing house.

Book cover altered
The Republican Jewish Coalition's media officer asked that a request to confirm the group's role in the mailing be emailed. She has not responded to the email or subsequent phone messages.

Engelmayer of CUFI told JewsOnFirst that he did not know what motivated the Republican Jewish Coalition's involvement, but that the mailing was intended to reach "the broadest spectrum of Jewish community members."

It is likely however, that Obsession was added to the book specifically for the mailing.

The cover of Brog's book, Standing with Israel, that arrived in the mailing is different than the cover currently advertised on his website. The cover in the packages received this week indicates that the DVD of Obsession is inside (see scan above). The original cover, copied this morning from Brog's website and shown here below the book cover from the mailing, has no reference to Obsession.

A knowledgeable source who asked not to be identified said that the Republican Jewish Coalition dictated the contents of the mailing as a condition of getting CUFI's message to the Jewish audience that CUFI wished to reach.

The Republican Jewish Coalition is a national organization, headquartered in Washington, DC, with revenue of $4 million in 2005. It calls itself "the pre-eminent Republican organization in the Jewish community."

On February 14th, the group's website had a news release slamming Democratic presidential contender Barack Obama's plan to try to bridge the widening gap between Muslim and Western nations."

Rabbi Joan Friedman a professor of Religion and Jewish Studies at the College of Wooster in Wooster, Ohio, said in a recorded interview it would be a mistake for Jews to involve themselves in the enduring contention between Islam and Christianity. "There is a long history between Christianity and Islam but if the Christians want to get on an anti-Islamic hobby horse, I think it is a mistake to buy into that," said Friedman, who received the mailing this week.

In response, JewsOnFirst noted that CUFI's contact with Muslims is limited to harsh critics of Islam like Walid Shoebat – and that CUFI's website displays a link to the Obsession trailer, using the photo below.

Rabbi Steven B. Jacobs, founder of the Progressive Faith Foundation, who has been active in efforts at Jewish-Muslim bridge-building, said in an interview with JewsOnFirst.org that Obsession "offers an inflammatory portrayal of Islam and stigmatizes all Muslims as potential terrorists." Jacobs expressed concern that the film is "going to blow up the bridge that many of us have worked hard to establish."

The film has sparked controversey around the country; critics have challenged its thinly disclaimed portrayal of Muslims as violent and hostile. Campus screenings have sometimes been canceled, in one instance because of fears that the film would provoke anti-Muslim hate crimes.

Jacobs told JewsOnFirst that, while McCollum did not require his staff of 400 to see the film, "it was quite intimidating" for staffers to refuse to see the film and the few Muslims on his staff were "quietly threatened." As a result of the meeting, McCollum agreed to establish a Muslim advisory panel and to educate his staff about Islam.

However, Jacobs noted, with the widespread mailing of Obsession into the Jewish community "many more will see the film" and "we've got an enormous responsibility to tell truths and not set a people up the way we were set up. In my opinion the Muslims are the new Jews of America in terms of being scape-goated and being hated. And we know that as well as anybody and we need to challenge this film."

Israeli ambassador urges U.S. Jews to embrace Christian Zionists
In the cover letter included in the mailing, former ambassador Daniel Ayalon praised CUFI's David Brog for his work with Christians and urged Jews to overcome their antipathy to Christian Zionists. "For the first time in Israel's history, we are seeing the emergence of a significant pro-Israel movement outside of the Jewish community," wrote Ayalon, who was ambassador to the U.S. between 2002 and 2006.

Rabbi Philip Bentley of Agudas Israel Congregation in Hendersonville, North Carolina, said that Reform Movement organizations ought to protest Ayalon's intervention in U.S. politics. "The Central Conference of American Rabbis and the Union for Reform Judiasm ought to register a strong protest against this mailing and against former Ambassador Ayalon for lending himself, his organization, and his title to the Hagee organization," Bently said. "If we are silent we have only ourselves to blame if Hagee makes inroads into our movement."

As does Ayalon in his letter, Brog (who is Jewish) argues in Standing with Israel that Jews should appreciate – not shun – Christian Zionist support for Israel.

Christian Zionism not an easy sell
Many Jews reject allying with Christian Zionists because of their fundamentalist domestic positions. CUFI's executive board and its directors include some of the biggest names on the religious right -- Gary Bauer, Jonathan Falwell and Rod Parsley, to name a few.

In the two-plus years that CUFI has been in existence, local Jewish federations have pressured rabbis to participate in CUFI's "Nights to Honor Israel." These programs usually feature televangelist John Hagee, CUFI's founder and chairman, who typically presents a big donation to the local federation and sometimes to an Israeli settlement project as well.

Some Jews reject the Christian Zionists' credo that Israel will be the scene of the "Battle of Armageddon" that presages the return of Jesus.

Rabbi Bill Leffler, vice president of MoneyWatch Financial Advisors, said he found Brog's book "a sorry commentary on why we should appreciate the religious right's support of Israel which has to do with the rapture and not the intrinsic worth of Israel. Politics can make for strange bedfellows!"

Recently CUFI has been trying to downplay Hagee's promotion of endtimes prophecy. CUFI's represenatitve Engelmayer emphasized that Hagee has said "countless times" that he does not believe Jesus' return is imminent. But Hagee has been promoting a U.S. attack on Iran in an end-times context.

Additionally, CUFI has gone out of its way to oppose Israeli-Palestinian negotiations that might lead to Israeli concessions. That causes some who believe it is in Israel's interest to negotiate a settlement with the Palestinians, to question the value of CUFI's support for Israel.

"If they want to contribute money to build hospitals, it is hard to argue with that, said Prof. Joan Friedman. But, she continued, "their contributions are not so innocent. They support groups that are inimical to the peace process."