Within the stream of new books critiquing the Religious Right and its malign influence in public discourse and public policy, few are as readable or as well-reasoned as this relatively brief cri de coeur by Columbia University historian of religion Randall Balmer. Because Balmer knows his history so well, he is particularly grieved by all the ways in which today's U.S. evangelicals betray the vision of their 19th century forebears, who agitated for social reforms including abolition, women's suffrage, the rights of workers, and universal high-quality public education. Balmer made a serious effort, for example, to get the top eight evangelical groups to give him their positions on the issue of torture in the so-called "war on terror;" only two groups were willing to respond, and they were both pro-torture. 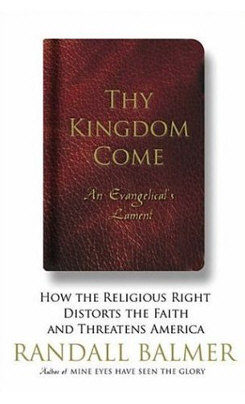 Balmer argues passionately that the anti-establishment clause of the First Amendment has been the best guarantor of both a healthy democracy and a flourishing religious life in these United States, and we therefore tamper with this arrangement at our peril. He deplores the courts' new willingness to allow tax dollars to support religious practice via "school choice" schemes and the shocking success militant Christianists have had in distorting family planning programs worldwide, blocking stem cell research, and altering school curricula. He visited the Virginia finishing college for home-schooled Christianist apparatchniks known as Patrick Henry University. The college boasts about the huge percentage of its graduates who land White House fellowships, key Congressional appointments, etc., but Balmer worries about the effects of handing all that power to people who remain innocent of any real knowledge of the world-whose premodern worldview is entirely shaped by their peculiar Christianist form of Bible study.

Considering the recent inroads white evangelicals have made in persuading African American church leaders to join with them in promoting a Christian America that is anti-gay but pro-war, one wishes that Balmer would say a bit more about the white supremacist roots of some of the movement's leading figures. He does point out that the galvanizing event leading to the evangelicals' new militance in the 1970s was not the Roe v. Wade decision so much as it was a series of court decisions upholding the IRS in depriving segregated schools and colleges of their tax-exempt status. Abortion was woven into the list of grievances later-once the leaders recognized that demanding tax-supported segregation was perhaps not the best plank on which to build their movement.

Balmer is very good on the blinkered biblicism that allows conservative evangelicals to pretty much ignore the Sermon on the Mount's precepts on forgiveness, humility, and reconciliation and also to disregard the many divine demands for economic justice that fill both testaments . He notes that Jesus of Nazareth had nothing at all to say on abortion or homosexuality and that the only thing Jesus did say pertaining to a "family values" question-namely that divorce is unacceptable-had to be pushed under the rug after the evangelicals' champion, Ronald Reagan, became president in 1980.

As its title suggests, Thy Kingdom Come is something of an insiders' book. One hopes that the moderate evangelicals Balmer is ostensibly appealing to will take it seriously. The rest of us have no choice but to take it seriously. Harvard's James Luther Adams used to say that when fascism finally came to America, it would come under the sign of the cross. Were he alive today, Adams would surely be reading the signs of these times and sounding a general alarm.

*Rev. Peter Laarman is executive director of Progressive Christians Uniting and is based in Los Angeles. Their website is www.ProgressiveChristiansUniting.org Laarman is also editor of "Getting on Message: Challenging the Christian Right from the Heart of the Gospel," reviewed here in May.